Ludwigstrasse with the State Library and Ludwigskirche 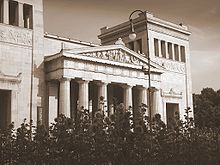 The Propylaea at Königsplatz

The Maxvorstadt is the city ​​district 3 of the Bavarian capital Munich .

The district adjoins the north-western sector of the old town between Odeonsplatz and Stachus and is bounded in the east by the Englischer Garten , in the north it borders on Schwabing-Freimann and Schwabing-West , in the north-west on Neuhausen-Nymphenburg , in the south-west on the Schwanthalerhöhe district and in the south to the Ludwigsvorstadt-Isarvorstadt district . The northern parts of Maxvorstadt are often mistakenly assigned to Schwabing . Georgenstrasse forms the border between Maxvorstadt and Schwabing .

Maxvorstadt, laid out on a square grid as a planned town , is characterized by the two north-south connections Schleißheimer Straße and Ludwigstraße , between which the parallel streets Amalienstraße, Türkenstraße , Barer Straße, Schraudolphstraße, Arcisstraße, Luisenstraße and Augustenstraße run. The two axes are connected by the east-west connections Gabelsbergerstraße , Theresienstraße, Heßstraße, Schellingstraße , Zieblandstraße, Görresstraße and Georgenstraße , whereby a one-way street regulation applies to Theresienstraße and Gabelsbergerstraße, the directions of which are opposite to each other.

The Maxvorstadt was conceived as the first planned urban expansion between 1805 and 1810 under the first Bavarian King Maximilian I Joseph , after whom it is also named, and was largely not built until after 1825 under Ludwig I in the classical style. Richard-Wagner-Strasse with the State School of Applied Arts, today the Bavarian State Collection for Paleontology and Geology , is still largely preserved . First of all, Ludwigstrasse was laid out from the Feldherrnhalle to the Siegestor . The border to the old town is roughly marked by Brienner Straße . A right-angled road network was laid out west of Ludwigstrasse. Wittelsbacherplatz , Karolinenplatz and Königsplatz are located in this quarter .

The district has an above-average number of institutions in the cultural and artistic field, many of the city's most important museums and collections such as the Old and New Pinakothek , Lenbachhaus with art building , State Graphic Collection , Glyptothek and Antique Collection , the Museum of Church Art in the Georgianum and the Academy of Fine Arts The arts and the University of Music and Theater are located here. With the opening of the Pinakothek der Moderne in 2002 and the Brandhorst Museum in 2009, further cultural and urban highlights were added.

Many educational institutions such as the Ludwig Maximilians University , the Technical University , the Universities of Politics and Philosophy , the University of Applied Sciences , the Historical College , the Orff Center , the State and University Library as well as the Bavarian Main State Archives and Munich State Archives are located in Maxvorstadt . In addition, important head offices of banks, insurance companies, corporations and supply companies have their headquarters here, as well as the Bavarian Broadcasting , the State Criminal Police Office , a large part of the Munich tax offices and courts, as well as the Spaten- Löwenbräu Group.

The concentration of jobs and the high number of students (over 100,000) mean that almost four times as many people stay in the district during the day than actually live there. The Maxvorstadt is a typical district for academics and students, especially around the universities and the art academy. Much of what characterizes the typical “Schwabing image” actually belongs to Maxvorstadt. The age group of 20 to 30-year-olds dominates among the residents, while children under 15 years of age and old people decline in number. The proportion of single-person households is above average, and fluctuation is also high. The reason for this is also the housing structure in the quarter with a high proportion of small one and two-room apartments. Two thirds of the housing stock date from after 1948. Many well-known people have lived in Maxvorstadt, for example Georg Elser , Thomas Mann , Franz von Stuck , Wolfgang Pauli , Franz Josef Strauss , Adolf Hitler and Joseph Ratzinger .

In the Maxvorstadt there are many places related to the time of National Socialism.

Further buildings were being planned in the course of the transformation of Munich into the “ capital of the movement ”, but were no longer implemented because of the war. After much discussion, the Munich city council decided in November 2005 to set up a Nazi documentation center on the former site of the "Brown House", which was opened in 2015.

In 1975 the first women's bookshop in Germany, Lillemors Frauenbuchladen , was founded in Arcisstrasse . It has been on Barer Strasse since 2000.

Since the end of the 20th century, there has also been a structural change in Maxvorstadt in the form that areas on which industry and commerce used to be located are being transformed into residential and work quarters. This applies, for example, to the former brewery site behind the Löwenbräukeller in the triangle between Sandstrasse, Nymphenburger and Dachauer Strasse , where a total of 70,000 square meters of gross floor area will be ready for occupancy by 2011. In addition, the two largest Munich universities have relocated some of their teaching and research locations, which were previously in the Maxvorstadt, to the outskirts of the city in Großhadern or Martinsried or Garching . Among other things, apartments and offices were built on the vacated areas. For example, the Charles Hotel is now located on the site of the former large biology lecture hall of the Ludwig Maximilians University in Munich .

In addition to the cultural and educational institutions already mentioned above, the Josephskirche on Josephsplatz, St. Ludwig on Ludwigsstraße and the St. Markus Church (Protestant university church, built in 1877) on Gabelsbergerstraße are striking buildings, as well as those located near Königsplatz St. Boniface Abbey . The old northern cemetery is also located in the district (not to be confused with the northern cemetery ). Since burials have not taken place there since 1939, it is now used as a park.

The two well-known Munich breweries Löwenbräu and Spaten-Franziskanerbräu are in the immediate vicinity between Nymphenburger Strasse in the north and Marsstrasse in the south .

In the Maxvorstadt is the Munich Art Quarter .

The Maxvorstadt in the media

Produced in 1976 by Hessischer Rundfunk , written by Gerhard Polt and - in around 50 different roles - spoken by himself, the radio play As if one were a roof in his building deals with the changes in the area around Amalienstraße as a result of structural measures in the 1970s.