Single home from the south

The Schwanthalerhöhe (also called Westend ) is the city ​​district 8 of the Bavarian capital Munich .

With an area of ​​2.07 square kilometers and a resident population of almost 30,000, the city district is one of the most densely populated districts in Munich. The Schwanthalerhöhe was planned as a workers' residential area as part of the relocation of industry to the west of Munich, so that there is a lot of cooperative housing here and the proportion of workers is still above average today. 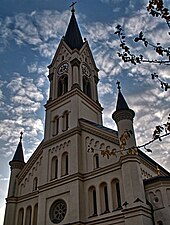 The Schwanthalerhöhe is located on the western edge of the city center on the Isar low terrace, bounded by the main railway station – Pasing and central station – Ostbahnhof railway lines . The slightly sloping eastern part of the district ( Theresienhöhe ), close to the city center, forms a transition to the Bahnhofsviertel, to the south of it above the Theresienwiese lies the former exhibition center .

Neighboring districts are Neuhausen-Nymphenburg and Maxvorstadt in the north, Ludwigsvorstadt-Isarvorstadt in the east, Sendling in the south and Sendling-Westpark and Laim in the west. 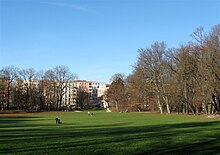 The district takes its name from the sculptor Ludwig Schwanthaler , the creator of Bavaria ; it was formerly called Sendlinger Höhe. Its emergence is related to the industrialization that began around 1840 , which resulted in the establishment of Wilhelminian working-class quarters with densely populated block developments. To this day, almost half of the Schwanthalerhöhe's building stock dates from before 1919. The sometimes poor building fabric with inadequate living standards made extensive renovation work necessary from the early 1970s. The Westend industrial estate and the Munich technology center were built on the factory site of the former Metzeler Gummiwerke in the 1980s . As a result, the economic structure in the district also changed. Around two thirds of the jobs in the quarter are now in the service sector , trade and public administration.

Striking places are the brick building of the Augustiner-Bräu (oldest brewery in Munich), the former main customs office with its large glass dome, the Hackerbrücke , the former XXXLutz furniture store (formerly Karstadt ) with its monumental vaulted glass facade, the adjacent "concrete mountains" ( Biermösl Blosn ) stacked blocks of flats, the Bavaria Park , from the Theodor Fischer built Ledigenheim near the Gollierplatz , as well as a number of smaller spaces that give the area its character. In 2006, the redesigned Georg-Freundorfer-Platz won the Lebendige Stadt Foundation's prize for the best playground and leisure area in Germany.

With the relocation of the Munich Exhibition Center to the Messestadt Riem in February 1998, the old exhibition grounds became available for further use. Around 1,800 new apartments were built there by 2004, as well as facilities for trade, commerce, services ( administration building of Mannheimer Lebensversicherung ) and public service facilities. The remaining listed halls of the old fair are buildings of the reform style ; the traffic center was opened there in May 2003 as an offshoot of the Deutsches Museum . In June 2010 the new Theresienhöhe square above the "railroad cover" was handed over to the population.

The good transport connections through two underground lines , the S-Bahn and the Mittlerer Ring , the central location and the urban flair make the district increasingly a popular residential area.

Among other things, events take place in the old congress hall. The traffic center of the Deutsches Museum was opened in 2003. District culture takes place in the Kulturkeller (Kultur- & Vereinskeller D'Schwanthalerhöh 'e.V.), in the KulturLaden Westend, in the Greek House Westend and in the Multicultural Youth Center (MKJZ). The district library has a focus on literature in various native languages ​​and language learners.

The district committee of the Schwanthalerhöhe was last elected on March 15, 2020. The distribution of seats is as follows: Greens 8, SPD 3, CSU 2, Linke 2, Free Voters / ÖDP 1 and FDP 1. Of the 20,969 residents in Schwanthalerhöhe who are entitled to vote, 10,079 exercised their right to vote, making the turnout 48.1 percent lay.

The constituent meeting took place on May 12, 2020 in the parish hall of the Church of the Resurrection (Gollierstrasse). The committee re-elected Sybille Stöhr as the district committee chairman. This means that the committee is again chaired by a representative from Alliance 90 / Greens, who has also recently moved into the Munich city council. Ulrike Boesser (SPD) was elected as the first deputy, and Uwe Trautmann (CSU) was elected as the second deputy. The district committee has organized itself into five committees for future work: Construction, Planning, Housing and Commerce (Chair: Willy Mundigl, SPD) - Social Affairs, Education, Housing Policy (Chair: Dominik Lehmann, Left) - Culture and Integration (Chair: Daniel Günthör, Greens) - Environment and Transport (Chair: Manuela Diebolder, Greens) - Budget and Finances (Chair: Florian Kraus, Greens).

The Central Tower at the Donnersbergerbrücke 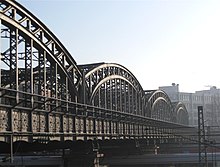 The Hackerbrücke connects the Westend with the Maxvorstadt .

The Donnersbergerbrücke connects the Westend with Neuhausen