Thalkirchen-Obersendling-Forstenried-Fürstenried-Solln is the city ​​district 19 of the Bavarian capital Munich , which was made up of several smaller city ​​districts and parts in 1992 .

The so-called Balde-Höhe, a hill on the grounds of Warnberg Monastery ( 579  m above sea  level ), is the highest point in Munich's urban area in district 19 . Green corridors that are important for the urban climate ( Isartal , Forstenrieder Park , Sendlinger Wald or Südpark , Siemenswäldchen, Waldfriedhof ) border or run through the district, which is made up of quite different districts.

The district located in the Isar lowlands west of the river is one of the oldest settlements in the south of the city and, thanks to its location on the renatured Isar, has an important recreational and leisure function for the entire city. Today's raft canal is located in Munich , on the other side of the Isar via the Thalkirchner bridge is the Hellabrunn zoo in the neighboring district 18 Untergiesing-Harlaching , and in the northeast on the Thalkirchner river side is the Flaucher belonging to Sendling , an extensive green corridor along the Isar Forest and meadows, playgrounds and the beer garden of the same name in a forester's house from 1800.

Thalkirchen, the church in the valley , was first mentioned in writing in 1268. In 1818 it was merged into one community with Obersendling and Maria Einsiedel . The original town center was at the church of St. Maria Thalkirchen (today Fraunbergplatz 1), to which an important pilgrimage with indulgences in the thirties can be proven. Because of the pilgrimage, extensive inns and beer gardens and the following excursion traffic developed in Thalkirchen . Thalkirchen was connected to traffic by the Isar Valley Railway. Towards the end of the 19th century, in connection with the strong growth of the city of Munich, these influences laid the foundation for entertainment establishments such as Gierlinger Park , a private green area with walking paths, an alpine hut, a small body of water with boat rental and other facilities. Bad Maria Einsiedel was opened in 1890 . Thalkirchen was incorporated into Munich on January 1, 1900. The establishment of the central land in Thalkirchen for raft traffic was decisive for this , because the raft land in Munich was abandoned due to the traffic load. In the course of incorporation, the first Thalkirchner bridge to Harlaching was built in 1904 . A famous Thalkirchner is the writer Wilhelm Jensen .

The Maria Einsiedel part of the community was first mentioned in writing in 1725. This part of the community was named after the painter Cosmas Damian Asam in reference to the Swiss pilgrimage site of the same name, Maria Einsiedel . Asam bought the property, now known as Asam-Schlössl , in 1724 with the money he had earned for the painting of the Swiss pilgrimage church; on May 11, 1734 the ownership letter was issued. On March 25, 1725 Egid Quirin Asam received permission to build a chapel. On October 25, 1730, he informed the competent clergy in Freising about the completion of the church, whereupon it was consecrated.

Three of the five point buildings in the new development area south side , 2014

Obersendling extends from the S-Bahn line (Thalkirchen) in the east to the Südpark in the west (Forstenried). The northern border runs to the Sendling-Westpark district . In the south the district borders on Solln.

Originally the district belonged to Thalkirchen and was incorporated into Munich on January 1, 1900. From an urban planning point of view, this district is a mixed area. The housing stock, which also has older residential areas, is embedded in an industrial and commercial area. After the Second World War , Obersendling experienced rapid economic development. The main trigger here was the concentration of the Siemens company around Hofmannstrasse. A branch had been located there since 1927. When the company moved its headquarters from Berlin to Munich after the Second World War, Hofmannstrasse became the central location. With the Siemens high-rise , a representative administration building was built between 1961 and 1963, with manufacturing and sales buildings grouped around the solitaire.

Siemens AG gave up the Hofmannstrasse location around the turn of the millennium and sold the site. As part of the Isar Süd project , a fundamental redesign of the entire Siemens area was to be carried out from 2005. The aim of the project was, among other things, to open up the previously closed Siemens location and to replace it with an integrated concept of living and working. Due to the referendum “Our Munich Initiative” in 2004, the planning had to be revised and skyscrapers over 99 m high had to be dispensed with. The new development plan for the former Siemens site was approved in 2010. The new city quarter " Südseite " east of Baierbrunner Strasse with around 2000 residents and 1000 jobs around a central park was completed in 2013. The parts of the former Siemens site west of Baierbrunner Strasse are to be built with around 1000 more apartments, while the Siemens high-rise is to be converted into around 300 apartments (as of 2019).

South across from the Siemens site was the 13.5 hectare Hermann von Siemens Sports Park for employees. In the course of the dismantling of the site, Siemens also gave up the sports park in 2011, which remained cordoned off during years of negotiations about the future use of the area and fell into disrepair. In 2017, the state capital of Munich finally bought the park and then renovated it to such an extent that a large part could be opened to the public on June 1, 2019 with a public festival. At the beginning of July 2019, the sports committee of the Munich city council unanimously approved a concept that u. a. New construction of a triple sports hall with spectator stands, a school swimming pool and a sports facility - all barrier-free - as well as the construction of various outdoor sports facilities (grass fields, 400-meter circular running track, handball and beach volleyball field) and a continuous jogging track, a fitness course and a boccia -Bahn provides.

The Siemens estate on Boschetsrieder Strasse is also in Obersendling, northwest of the factory premises . Worth mentioning are the two Siemens star high-rise buildings, the first high-rise buildings of their kind to be built in Munich after the war.

Since mid-2019, the “Young Quartier Obersendling” has been under construction on the former Siemens site at the Machtlfingerstraße subway station, bringing together educational and advisory services for young people and young adults. The facilities of the Junge Quartier include the SchlaU school and the cafe network.

On a decade for the planned company headquarters of the Isar-Amperwerke , later E.ON , land kept free on the western edge of Obersendling, bounded by Drygalski-Allee, another eight-hectare new building area was built from 2015 between Boschetsrieder and Kistlerhofstrasse, the quarter " Am Südpark ", named after the nearby Südpark . It was built as a residential and work location for around 2500 people and 400 workplaces with extensive social infrastructure as well as public and private green and open spaces. 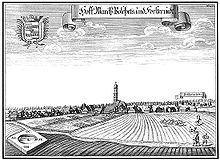 The district with the relatively well-preserved old village center consists mainly of residential areas. It was first mentioned in 1166 as Uorstersriet , the name is composed of the words Uorst for forest, forest and reed for clearing . The old town center was around the parish church Heilig Kreuz (today Forstenrieder Allee 180a). Forstenried was incorporated into Munich on January 1, 1912. Between 1959 and 1971, three large residential complexes were built in the Forstenried district. With Neu-Forstenried (formerly Fürstenried-III ), Fürstenried Ost and Fürstenried West as well as the Parkstadt Solln built east of them on Sollner Flur , more than 12,500 apartments for more than 25,000 residents were created.

The “Fürstenried-Ost” branch of the Munich Adult Education Center is located at Forstenrieder Allee 61 .

Fountain on Schweizer Platz in Fürstenried-West

Fürstenried, originally called Poschetsried , owes its name to Prince Elector Max Emanuel and the term Ried for clearing. The elector commissioned his court architect Joseph Effner to build Fürstenried Castle (1715–1717). Fürstenried was first mentioned in 1716 and has belonged to the Forstenried community since 1818. In 1912 it was incorporated into Munich.

Today Fürstenried is a purely residential area that emerged in the 1960s. Large residential complexes dominate the quarter, and there are also single-family houses in the southern part. In Fürstenried West and Fürstenried Ost , major construction projects were implemented in a short time, which still shape the image of the district today, in order to create affordable living space as quickly as possible. Of the high blocks of flats, the so-called “Sparkassen-Hochhaus” in Winterthurer Strasse is best known; When it was inaugurated in 1962, it was the largest residential building in Bavaria. The good transport connections ( underground line U3 , motorway A 95 to the Mittlerer Ring in Munich and Garmisch-Partenkirchen ) and the proximity to Forstenrieder Park make Fürstenried a very popular residential area.

Solln is the southernmost district of Munich. With its garden city character and old villas, it is one of the most expensive residential areas in the city. In the course of densification , densely built-up condominiums in the upper price segment are increasingly being built in place of the old mansions.

The former town center extended south from the old St. Johann Baptist Church in Sollner to today's Wilhelm-Leibl-Platz. Here was the old post office , the Tafern restaurant and post office on the road to Pullach .

One of the most famous Sollner of modern times is the chemistry - Nobel laureate Ernst Otto Fischer, who was born before the incorporation . In the old Sollner cemetery he found his last resting. The actor Curd Jürgens (died 1982) was born in Solln in 1915 . The Solln forest cemetery covers almost seven hectares with around 3000 grave sites, including many well-known personalities .

To the west of the core of Alt-Solln is the high-rise Parkstadt Solln , which was built in several independent sections in the 1960s and 1970s .

The district of Warnberg at the southern end of Solln was first mentioned in 1185 under the name Warnberch , which means something like Berg des Warin . This, in turn, means guard in today's High German , which suggests that there was a scouting mountain here around 1200 to secure the Isar roads. The district became part of Solln in 1818. On December 1, 1938, the former municipality of Solln was incorporated into the city of Munich. The Balde-Höhe, the former Burgstall of Warnberg, is 579  m above sea level. NN the highest point in Munich. 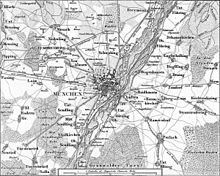 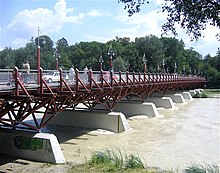 Thalkirchner Bridge over the Isar

The Isar through Thalkirchen in autumn

Most of the jobs in the city district are concentrated in the industrial and commercial area of ​​Obersendling. The social structure of the district follows the urban development conditions in the districts (villa district Alt-Solln, single-family house areas in Forstenried and Maxhof, large residential complexes and terraced house areas in Fürstenried, older residential areas and cooperative buildings in Thalkirchen and Obersendling). The proportion of foreigners for the entire district is below the urban average, but fluctuates significantly between the individual districts.

The city district is accessed on the one hand via Autobahn 95 and on the other hand via Bundesstraße 11 . The subway stations Fürstenried West , Basler Straße , Forstenrieder Allee , Machtlfinger Straße , Aidenbachstraße , Obersendling and Thalkirchen on the U3 line and the Siemenswerke and Solln suburban train stations on the S7 and S20 lines are also located in this district Regional trains) on the Munich – Holzkirchen railway line . The former Isar Valley Railway was shut down and the track bed was converted into a cycle path that now connects Solln and Thalkirchen.

The district committee of Thalkirchen-Obersendling-Forstenried-Fürstenried-Solln was last elected on March 15, 2020. The distribution of seats is as follows: Greens 12, CSU 11, SPD 8, FW 2, AfD 2 and FDP 2. Of the 69,840 residents of Thalkirchen-Obersendling-Forstenried-Fürstenried-Solln who are entitled to vote, 35,031 have exercised their right to vote, which means that voter participation was 50.2 percent.