The Theresienwiese is an empty area for most of the year

Theresienwiese one day before the opening of the Oktoberfest (2006) 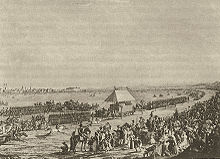 A horse race on the Theresienwiese, around 1811 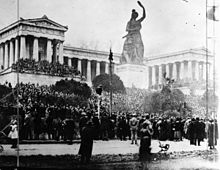 Rally on the Theresienwiese on November 7, 1918, which marked the starting point of the November Revolution in Bavaria

The Theresienwiese is a fairground or a special open space with 42 hectares in Munich's Ludwigsvorstadt-Isarvorstadt . It is bordered by the Bavariaring or Theresienhöhe and cut through from west to east by Matthias-Pschorr-Strasse, which is only accessible to pedestrians and cyclists, with the statue of Bavaria in the west and Esperanto Platz in the east .

The Theresienwiese was named after Princess Therese von Sachsen-Hildburghausen , the wife of the Bavarian Crown Prince Ludwig, who later became King Ludwig I. The couple were married on October 12, 1810. At the end of the day-long wedding celebrations, a horse race (newly launched scarlet fever race ) was held on October 17th . It was organized by the banker Andreas Michael Dall'Armi . A pavilion was built for the newly wedded couple, where they received the homage from 16 pairs of children. 50,000 spectators camped on a slope above the meadow, which was now called "Theresiens Wiese" with royal approval. The coachman Franz Baumgartner emerged victorious from the horse race.

The decision to repeat the race the following year gave birth to the Oktoberfest tradition . As early as 1811, the horse races were accompanied by the first agricultural festival (of the agricultural association founded in Bavaria in 1810 ) as an exhibition of domestic cattle breeding .

In 1812 the King's approved Nazional Festival to encourage and promote agriculture was planned for October 18 and 19, and a horse race as part of it. The races of the Centralfest included trial races for two classes: Bavarians and foreigners. A total of 37 horses were named, 15 of them foreign.

The first carousels and swings were set up in 1818 . In 1890 Buffalo Bill performed with a group of Indians , cowboys and animals as part of his European tour. From 1896 there were the first large beer tents .

On November 7, 1918 there was a large rally against the First World War on the Theresienwiese with around 60,000 participants, which immediately afterwards led to the overthrow of King Ludwig III. led. Demonstrations on January 7, 1919 and on February 16 at the same location were intermediate stops in the establishment of the Munich Soviet Republic .

On September 26, 1980, the Oktoberfest attack took place. The attack is still considered the most serious act of terrorism in post-war German history . 13 people died in a bomb explosion at the main entrance of the Oktoberfest, 211 were injured, 68 of them seriously. According to the official opinion of the authorities, Gundolf Köhler was the sole perpetrator who was solely responsible for this act. This is controversial.

Since the 200th anniversary of the Oktoberfest, the Theresienwiese has not only hosted the Oktoberfest (popularly known as Wiesn ) with well over six million visitors from all over the world, but also the Oide Wiesn , if not the traditional sister festival , the Bavarian Central Agricultural Festival (ZLF) takes place. The Munich Spring Festival , the Tollwood Festival in winter as well as circus tours and flea markets are also held there.

Striking points on Theresienwiese are the Bavaria in front of the Ruhmeshalle in the west and the 97 meter high neo-Gothic St. Paul's Church in the north. Noteworthy vegetation, such as lawn, no longer exists on this open space, regardless of its historical name. It therefore looks unusually deserted for an inner-city terrain in a prominent location - similar to Hamburg's Heiligengeistfeld outside of the periods with major events. It is noteworthy, however, that parts of the gravel areas are temporarily filled with typical fallow vegetation and that a kind of "meadow" can be made out for parts.

The service center on Theresienwiese in Munich has been located north of Bavaria on Theresienwiese since 2004 . The building has three functions: a police station in the southern part, the fire brigade operations center and the BRK medical station with treatment and relaxation rooms in the central area, and the tourist office, youth welfare office and lost property office in the north wing. The tourist office uses the north wing of the building all year round, which corresponds to an occupancy rate of around 20%. The rest of the building will only be used during the Oktoberfest, including the construction and dismantling phase. In the idle phase, an automatic system flushes the drinking water pipes every 72 hours, otherwise the building is considered "maintenance-free".

Service center on Theresienwiese in a closed state - 2016