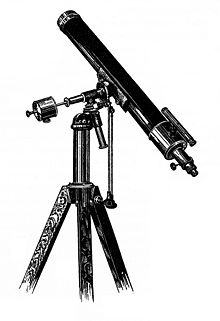 An optical telescope is an optical device that can be used to magnify objects that are far away or examine them with high resolution . Depending on their structure, a distinction is made between the telescope (lens telescope) and the reflector telescope .

Optical telescopes are mainly used for observation in the field ( binoculars , observation telescope ) and of astronomical objects . When observing the sun, a suitable solar filter must be used. But there are also other areas of application. Examples of this are the exploration of the earth's atmosphere with LIDAR telescopes, control and target telescopes ( diopters ), theodolites and satellite geodesy .

The lens or the mirror system of an optical telescope creates a real image in its image plane . This image can be made visible in two ways:

Because of their large focal length and weight, telescopes (with the exception of smaller binoculars) are held and moved by mounts . Their stability and control options are - particularly in observatories - essential for the performance of the telescopes .

Optical telescopes for scientific purposes are now almost exclusively mirror telescopes . The currently largest main mirrors have a diameter of 10 m ( Keck telescopes I and II in Hawaii, composite, fragmented mirrors), or 8.2 m diameter (Very Large Telescope VLT , in Chile, operated by the European Southern Observatory , a total of four individual telescopes which can be interconnected, with main mirrors each made of a glass ceramic block).

The Hubble Space Telescope is an example of a large optical telescope in orbit . Since we have now learned to use the resolving power of very large telescopes on the earth's surface ( interferometry and adaptive optics ), future projects for space telescopes will focus on researching spectral ranges for which the earth's atmosphere is impermeable: ( UV , infrared radiation , X-rays ). Strictly speaking, these no longer belong to the optical telescopes, but are similar to them in many respects, with the exception of X-ray telescopes.