Oscar Schmitz is a redirect to this article. For the prison functionary see Oskar Schmitz .

Oscar Adolf Hermann Schmitz (also: Oscar AH Schmitz ; born April 16, 1873 in Bad Homburg vor der Höhe , Hessen-Nassau ; † December 17, 1931 in Frankfurt am Main ) was a German society writer and member of the Munich bohemian community . In his writings, which were quite popular at the time, he described, analyzed, parodied and reflected on the upper class - zeitgeist of Wilhelmine Germany and its crisis after the First World War . There is also a comprehensive opus of travel and advice literature , as well as numerous writings in which he promoted astrology and psychoanalysis .

Schmitz was born in 1873 as the first of four children to a bourgeois family in Homburg vor der Höhe, Hesse. After his parents moved to Frankfurt am Main , he attended the municipal high school there , but had to leave it due to a lack of discipline. In 1892, however, he passed the Abitur at the Philippinum grammar school in Weilburg , albeit with difficulty . This was followed by unsteady studies in law , economics , philosophy and art history in Heidelberg , Leipzig , Munich and Berlin .

In 1894 Schmitz studied art history in Rome for six months , then traveled back to Munich via Sicily , Tunis , Naples , Budapest and Vienna and began one after the other doctoral theses in the subjects of economics and literary history , but in 1895, after the death of his father, he broke his studies as a whole from, as a substantial pension ensured him permanent prosperity, so that he could devote himself entirely to the search for adventure, his travels and his literary work. Through Karl Wolfskehl he met the poet Stefan George in Paris in 1897 , and Schmitz published his first own poems in his journals for the arts . Nevertheless, Schmitz forfeited George's favor by frankly criticizing his follower Melchior Lechter .

In Munich he later met the writer Countess Fanny zu Reventlow and Ludwig Klages . Schmitz became an enthusiastic participant in the hustle and bustle of the Schwabing Bohème , among other things in the circle of cosmists . In a novel inspired by his own experiences, which was first published under the title When we women awake and later published under the main title Bürgerliche Bohème , Schmitz drew a satirical image of the morals of the Munich upper class of that time.

With his short story Haschisch , published in 1902 , Schmitz made a significant contribution to the development of fantastic literature. It plays with taboo subjects such as eroticism , satanism , sadism , religion , death and intoxication .

With his brother-in-law, the graphic artist and illustrator Alfred Kubin , he traveled all over Europe, North Africa and Russia. Longer stopovers were Munich, Salzburg, Rome, Paris and Berlin.

When the First World War broke out , he panicked and allowed himself to be written unfit for military service. In the following years, however, Schmitz dealt intensively with topics from politics and society.

Caused by his psychological interest, but also by his own psychological crises, Schmitz turned to psychoanalysis and psychotherapy at an early stage , in particular CG Jung and Alfred Adler . He was also attached to Count Keyserling's “wisdom school” . Long before psychologists referred to personality concepts in astrology , Schmitz foresaw the development of an "astro-psychology" in his writing Geist der Astrologie (1922), which still occupies a central and topical position in esotericism .

In 1931 Schmitz died of a liver disease and left behind numerous cultural-political writings, essays, plays and novels. Although Thomas Mann considered him to be an "excellent, intelligent writer", Schmitz is no longer too present in the public consciousness.

In addition to his autobiographies (1925–1927), which were published in three volumes, the diaries published by Wolfgang Martynkewicz in 2006–2007, also in three volumes, have recently come into consideration as biographical sources . The German Literature Archive in Marbach manages part of Schmitz's literary estate .

Schmitz himself was married three times, mostly for a very short time, but remained childless. His sister Hedwig married the graphic artist Alfred Kubin in 1904 . One of Schmitz's nephews (son of sister Mathilde) was the literary scholar Richard Alewyn . 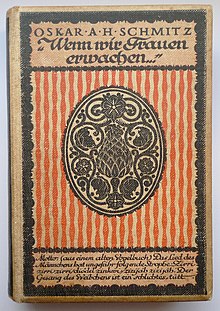