This article explains the state of intoxication. For other meanings, see Intoxication (disambiguation) .

Trip is a redirect to this article. Further meanings are listed under Trip (disambiguation) .

The related phenomenon of ecstasy is also described as “intoxication of the senses”. Colloquially some Drogenräusche are also called trip ( trip called). There are also similarities to trance , but this term is much more general.

In medicine, intoxication, detached from any feelings of happiness, is primarily understood as the state of confusion after drug use . He is accordingly

“[E] in a state picture after ingestion of a psychotropic substance with disorders of the state of consciousness , cognitive abilities , perception , affect and behavior or other psychophysiological functions and reactions. The disorders are directly related to the acute pharmacological effects of the substance [...] "

- ICD-10 (WHO): German Institute for Medical Documentation and Information

A division into simple and pathological intoxication is controversial from a medical point of view (also with regard to culpability ). Firstly, the data on so-called “pathological noise” is sparse and, secondly, simple intoxication can hardly be described as non-pathological.

The word "Rausch" (from Low German rūsch , documented 1563) comes from Middle High German (riuschen) and originally meant "impetuous movement", "impetuous when attacking", "to storm", "run up". The reference to drunkenness in general, not just substance-related, arose in the 16th century. As reuschlin 1551 for “(light) drunkenness”. 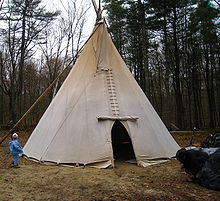 Alcohol in the form of mead and a type of beer may have been brewed as early as the Stone Age around 9,000 years ago . The use of the hallucinogenic fly agaric , mushrooms containing psilocybin , is also dated 7000 years ago. In Russia (especially in Siberia ) the fly agaric was widespread. It was also common to drink the urine of a shaman after he had consumed toadstools. The psychoactive properties of the thorn apple were already known in ancient Greece.

In ancient and medieval Europe, excessive intoxication was considered perfectly normal. In the Middle Ages, for example, in beer brewing often henbane added to enhance the intoxicating effect. In the 16th and 17th centuries, on the other hand, intoxication was outlawed. From the 19th century this was increasingly viewed as pathological.

Even today, rituals are celebrated in various cultures in which intoxicating substances play an important role. In western societies, toasting with alcoholic beverages at private and social celebrations is a widespread ritual that is often performed during the climax of the event and creates a strong sense of togetherness. Another example can be found at the Santo Daime Church or the Native American Church , whose followers ritually consume the hallucinogenic peyote cactus and report on deep spiritual experiences . The community strictly rejects intoxication outside of these rituals. The brew Ayahuasca is also used in various indigenous South American religious communities . Strict rules apply, e.g. B. alcohol must be avoided around the time of the ritual. Tobacco was also a purely medicinal and ritual drug used in pre-Columbian times .

Even today, scientists see a certain ritualization in some types of consumption of intoxicating substances. Mutual support in procurement, joint consumption (e.g. passing the joint around ) or getting drunk together can take on ritual forms (even if without the spiritual aspect).

The intoxication in modern times

In the late 1950s, mushrooms containing psilocybin became popular thanks to their rediscovery by R. Gordon Wasson . Albert Hofmann succeeded in extracting the main active ingredient psilocybin and synthesizing LSD . Both substances were initially used in psychotherapy.

"The gates of perception"

In his 1954 book The Portals of Perception , Aldous Huxley describes the effects of hallucinogens. He had experimented with mescaline , among other things , and came to the conclusion that the brain destroys more impressions than it allows in order to protect people from confusion caused by too much information. He also points to the spiritual use of peyote in the Native American Church (see above) and at the same time condemns the unspiritual, mere consumption of "civilized society".

The then psychotherapist Timothy Leary , who felt enlightened through the consumption of a psilocybin-containing mushroom, which the Aztecs called "Teonanacatl" (English: 'flesh of the gods'), propagated the use of mind-altering substances in order to "divine consciousness" to reach. He emphasized that this should be reserved for mentally stable people. Together with friends he studied the effects of psychedelic drugs. He later lost his chair at Harvard University .

According to the philosophy of the hippie era, the goal of intoxication was to expand consciousness, which is why hallucinogenic substances were preferred because of the productive symptoms they produced. Hallucinogenic substances were banned in the late 1960s. The writer Carlos Castaneda , who was popular in the 1970s and 80s, took a similar view as Timothy Leary and described the traditional drug culture of the Indians of Mexico in this context.

The eighties and nineties - the triumphant advance of techno and ecstasy

With the emergence of acid house in the mid-1980s - and later techno music - the triumphant advance of stimulating substances began. Ecstasy and other amphetamine-like substances keep the user awake so that he can dance himself into a trance for longer. In addition, the substances increase mood, disinhibit and facilitate contact.

Course of a drug intoxication

Course of action of various drugs

The intensity and character of the physical and psychological effects typical of intoxication correlate directly with the concentration of the drug in the bloodstream. The duration and course of intoxication depend on how and how quickly the drug is metabolized. The total duration of a drug intoxication is usually 3–10 hours, depending on the drug and dosage, and is usually divided into three phases:

The transition between the phases is usually clearly noticeable for the intoxicated, since certain effects of the drug appear or subside relatively abruptly.

Under the influence of psychedelic drugs , perception and association can change dramatically in all aspects, although the awareness that one is in a state of intoxication is usually not lost. Currently processed, stored as memories or ideas as well as archetypal consciousness contents can be visually or acoustically manifest. The unreal nature of these illusions and pseudo-hallucinations is always recognized. The changed associations can result in surprising twists and turns of the perceived and the intoxication itself and evoke inner experiences perceived as insightful up to life-changing "spiritual experiences".

A phenomenological description of intoxication itself is not possible; Ultimately, a psychedelic high is always a highly subjective experience that can only be conveyed superficially in terms of language, and the neurochemical basics have only been partially researched. A central component is the visionary restructuring, the change in thinking and association towards the pre-verbal, combined with the manifestation of the unconscious in all aspects of perception. The disruption of the normal function of certain control loops controlled by the serotonin system plays an important role here , as a result of which the filter function of the thalamus is omitted and the frontal lobe is also flooded with neuro-excitatory glutamate . Another fundamental aspect of intoxication is the (euphoric or fearful) ego dissolution or oceanic self-delimitation, the abolition of the boundaries between the ego and the outside world. The changed release of neurotransmitters leads to an overactivation of the locus caeruleus in the midbrain. The subsequent release of norepinephrine throughout the brain creates a state of extreme alertness and mental transcendence .

External stimuli (e.g. music), but also internal stimuli, such as one's own thoughts and feelings, can make a wide variety of contents manifest in perception on a psychedelic intoxication or change what is already manifest, whereby the contents become increasingly visual in the case of intense intoxication appear. In principle, this mechanism makes the intoxication controllable over long distances and enables work with the self, provided that attention is focused on it. However, many possible changes in perception are also of a purely neurological nature, such as "morphing" (bending or shaking of objects) due to impaired pattern and edge recognition, abstract geometric effects due to interference in the visual pathway or changes in the pitch of music being heard. Particularly strong noises can also lead to an overinterpretation of the patterns seen, whereby objects that are not actually present are perceived, but recognized as illusions.

In summary it can be said that the psychedelic drug intoxication represents a state of fully preserved wakefulness under the circumstances of a brain-wide reorganized, relaxed cognition .

The high quality of dissociative drugs differs fundamentally from the classic psychedelic high, as other neurochemical mechanisms are set in motion. Due to the function as a dopamine reuptake inhibitor and in particular the activation of sigma-1 receptors , high doses can also trigger psychedelic and transcendent states. Characteristic of the dissociative intoxication is the extensive or complete loss of body and sensory perception caused by blockade of NMDA receptors and the associated experience of an out-of-body and otherworldly state of consciousness. Since mental processes can be partially dissociated , i.e. decoupled from consciousness, in intoxication , one can get the impression of existing in several places at the same time or of being able to move between several levels of existence. The real existing environment can also appear unreal . Vivid, detailed, and increasingly realistic pseudo-hallucinations occur at higher doses. Also synesthesia are possible, such as visualizing identify music or listening to feelings.

The high on delirium differs significantly from the psychedelic and dissociative high in that it is characterized by complete mental dissociation. There are typical anticholinergic side effects that are similar to delirium . As a result, the intoxication is experienced as disoriented, confused, episodic and not clear, and repeated amnesias ("film tears") can also occur. There are no psychedelic or transcendent states of consciousness. Real hallucinations, not recognized as such, can occur and awareness of the intoxication itself can be lost. "Phantom actions", that is, interactions with non-existent objects and people, with a corresponding risk of accidents, can occur. For users inexperienced with hallucinogens, the risk of getting on a bad trip is particularly high with this type of intoxication due to the strong loss of reality and control.

With a certain constitution or environment (see set and setting ) and especially with inexperience with psychedelic states, it can happen that the intoxicant is emotionally very preoccupied with negative contents of consciousness, is simply afraid of them or they are not part of the intoxication and thus himself accepted. The fixation on the negative content can very quickly lead to more and more of it being produced and attracting the inner focus of the intoxicant to an ever greater extent, until the intoxication turns into a so-called horror trip through this type of feedback. This can be accompanied by strong feelings of fear and corresponding reactions (e.g. disorientation, crying fits, in extreme cases panic reactions).

Bad trips are not completely avoidable and occur occasionally, even with experienced users of hallucinogenic substances. Basic preventive measures are sufficient knowledge of the effects of the drug, avoidance of hallucinogens in the case of an unstable personality or mental illness, non-use when the mental state is depressed or tense, and in case of doubt the involvement of another person to accompany the intoxication ("trip sitter") ).