The Hohe Sonnblick (also Rauriser Sonnblick ) is 3106  m above sea level. A. high, glaciated mountain of the main Alpine ridge in the Goldberg group in Salzburg, close to the border with Carinthia . The Sonnblick observatory and the Zittelhaus alpine refuge are located on its summit .

The Hohe Sonnblick seen from the north 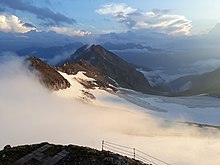 View from the Zittelhaus in July 2017

The mountain stands at the end of the Hüttwinkl Valley , the Hintertal of the Rauris Valley , in the main Alpine ridge . The mountain is a massive massif, with a characteristic rock pyramid on the summit, and a mighty north face above Kolm-Saigurn . The highest peak in the Goldberg group is not the Hohe Sonnblick, but the 3254  m above sea level. A. high north standing Hocharn .

In the area of ​​the Sonnblick there are historical gold mines , which gave the summit group around the Sonnblick its name Goldberggruppe . The ruins of the gold rush still stand on the slopes today, Kolm-Saigurn is an ancient mining settlement. At the foot of the Sonnblick you can still panning for gold today - successfully, but not very profitably compared to historical mining, which contributed significantly to the wealth of the Prince Archbishopric of Salzburg .

An aerial tramway, which is closed to the public, leads from the head of the valley over an altitude of almost 1500 meters from the north to the summit. The "gondola" used to consist of a box hung under the rope. However, since a modernization in 2018, the railway has a cabin for 6 people. It is also suitable for transporting loads.

At the Hohen Sonnblick there is a high mountain climate. 85% of the precipitation occurs in the form of snow. The annual amount of fresh snow is around 23 m. Wind peaks of more than 120 km / h are not uncommon.