from Wikipedia, the free encyclopedia
This is the spotted version , flagged on December 6, 2019 . There is 1 pending change that has yet to be viewed.

Wagrain is a market town with 3121 inhabitants (as of January 1, 2020) in the St. Johann im Pongau district in the Austrian state of Salzburg .

Wagrain, core area around the market with Kirchboden in front, view in northwest direction towards the Hochkönig 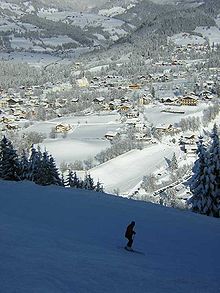 The Wagrain valley widening towards the northeast, Kirchboden with the parish church

Wagrain is located in Pongau , about 55 km south of Salzburg and 8 km east of St. Johann im Pongau . In the district of Schwaighof is the watershed of the Salzach and Enns , the Wagrainer Höhe . The highest point is at 2037  m above sea level. A. on the fork on the southern edge of the municipality.

A popular excursion destination is the mountain Öbristkopf ( 1411  m above sea level ), a destination for the Salzburg hiking nobility.

The municipality includes the following five cadastral communities and towns of the same name (population in brackets as of January 1, 2020):

Counting districts are Wagrain market centers for the main town and its immediate surroundings, and Wagrain surroundings for the rest of the municipality.

The name Wagrain is made up of the two Middle High German words wac (moving water, river) and rein (rain, meadow, slope). 1243 is the Salzburg City Book Wakrein first documented in 1350 Wax Rain and 1382 Wakchrain written. Under the influence of the written language, the current spelling was finally used.

In the Middle Ages the area was a mining area.

Wagrain was the place in the archbishopric of Salzburg with the highest number of Protestant exiles . Over 80% of the locals preferred to be expelled (mostly to Prussia) over to convert to Roman Catholicism .

In red a golden tip in which a silver crenellated tower with a gate and two windows stands above natural water on a green bank .