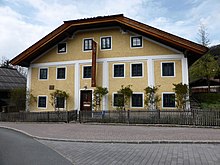 Karl Heinrich Waggerl , born as Karl Waggerl (born December 10, 1897 in Bad Gastein , † November 4, 1973 in Schwarzach im Pongau ), was an Austrian writer . With 5 million books and translations sold in more than a dozen languages, Waggerl is one of the most widely read German-speaking authors of the 20th century.

Karl Waggerl, who only acquired his middle name Heinrich as a writer, attended the teachers' seminar in Salzburg together with his long-term friend and companion Karl Springenschmid . There he did not take the exam, but volunteered for service with the 59th Infantry Regiment during the First World War in 1916 , with whom he experienced the trench warfare on the Isonzo . On June 30, 1918, he was now a lieutenant and was taken prisoner in Italy. There he fell ill with tuberculosis due to malnutrition . After his release on August 26, 1919, Waggerl had to give up the job he had started as a village school teacher in Wagrain (Pongau) in 1923 at the age of 27 due to this suffering . In early retirement he began to paint first, then to write. Throughout his life he remained pacifist through his war experiences .

His first novel “ Bread ”, inspired by Knut Hamsun , was published in 1930 by Insel-Verlag . In his popular stories and novels, Waggerl thematized - increasingly idealizing - country life. From August 1940 to May 1941 he was mayor of Wagrain , where he lived for 50 years.

After the Second World War he was valued for his idyllic short prose. The writer Hermann Hesse said: "The actually poetic books in our literature are becoming increasingly rare, but Waggerl's are one of them." Especially during the Christmas season, he often read from his stories and legends until his death, which was also due to a few recordings is occupied.

In Wagrain there is a Waggerl Museum in his former home. A plaque commemorates him on the outer wall of the house where he was born in Bad Gastein (today the Kurpension and Bergfriede restaurant at Karl-Heinrich-Waggerl-Straße 23).

Waggerl as a National Socialist

In 1936 Waggerl became a member of the Association of German Writers Austria , which had split off from the PEN Club in 1934 because some writers had written a protest note against the persecution and incarceration of fellow German writers in the course of the book burning in March 1933 in the German Reich . The members of the “Bund” worked energetically towards the “Anschluss” in order to “pave the way for the liberation of their people and complete it” ( Max Stebich 1938). In it, members and sympathizers of the NSDAP came together to form an illegal front organization.

After the "Anschluss" of Austria to the German Reich in 1938 , Waggerl contributed to the Confession Book of Austrian Poets (published by the Association of German Writers in Austria), which enthusiastically welcomed the "Anschluss". Under the title “Poets profess to return home to the Reich”, Waggerl wrote: “May all sins be forgiven, but not one: to doubt or deny now!” The Salzburg homeland poet praised Adolf Hitler for “the liberating power of a truly great one Humanity". In 1938 Waggerl also became a member of the NSDAP , and in May 1939 the National Socialists made him regional chairman of the Reichsschrifttumskammer in the NS- Gau Salzburg .

Waggerl was friends with the National Socialist Austrian writer Karl Springenschmid , who was his school and teacher colleague and who was primarily responsible for the Salzburg book burning on April 30, 1938 and who wrote a souvenir book for Waggerl with the title Servus Heiner! Published memories of Karl Heinrich Waggerl , in which he saw Waggerl as a sympathizer, "who did not understand at all what the National Socialists wanted". After the Second World War, the two led an ideological controversy about the nature, meaning and tasks of marriage.

To this day, Waggerl's Christmas stories in particular have remained extremely popular. First and foremost the book And it came to pass that u. a. The famous Christmas legends What the Christ Child had to smile about or Why the black King Melchior was so happy contains, which are even more famous than their author outside of Austria, is considered a masterpiece of the genre and has long been part of classic Christmas literature.

Waggerl also recorded five of the six legends in the book, initially for his Salzburg publisher Otto Müller ; later the recording appeared, supplemented by the missing story, in the literary archive of the Deutsche Grammophon Gesellschaft .

In addition to the legends, Waggerl also wrote down many reflections and memories of Christmas, which are often rooted in early memories of his childhood. “Thank God for a tiny spark of light in the terrible darkness,” Waggerl once described the pre-Christmas season.

To this day, Waggerl's stories and reflections on the “quietest time of the year” have been spoken by the best interpreters, along with his own interpretation and the like. a. also by Josef Meinrad , Heinz Rühmann and Hans-Joachim Kulenkampff .

The special and decisive role that Karl Heinrich Waggerl played for a long time as a reciting poet for the Salzburg Advent Singing also stems from the deeply felt love of the avowed atheist for Christmas, which is expressed in many of his literary works.

In addition to the Christmas stories, the technically flawless but hardly internationally relevant novels and the rather marginal flower poetry, Waggerl has written a few shorter texts that definitely secure a place among the Austrian writers of the 20th century. The story Wagrainer Tagebuch, for example, offers a linguistically formed resigned self-observation that reveals an inner life full of self-skepticism and despair, but also the will to be beautiful. In the Wiesenbuch Waggerl dares to take strange pictures of a beloved girl who, as a goblin-like meadow creature, repeatedly eludes the narrator.

As part of the conversion of the Waggerlhaus - the house of KH Waggerl - into a museum and archive for his estate, extensive photographic material was discovered: 34 photos in passe - partouts , numerous other photos, fine prints , negatives on plates and on film , cameras and laboratory equipment. The photographs found contain, on the one hand, memories from friends and family on 35mm and slide film , but also artistic recordings on photo plates and traces of experimental work - retouching , art prints, or covering or cutting out negative parts.

Waggerl founded a photo association in which he willingly passed on his vast photographic knowledge. But how Waggerl himself got his knowledge is unknown today. Recurring motifs in his photography are, for example, the mountain landscape around Wagrain, portraits (especially of his wife Edith), staged self-portraits , close-ups, still lifes and photo experiments. It can no longer be determined whether Waggerl consciously referred to existing artistic photographic trends in his photos or whether they stem from his own willingness to experiment. Waggerl's estate shows, however, that his knowledge and ambitions far exceeded that of the average amateur of the time. In contrast to his late literary work, his photographs documented rural life, "free of romantic sentiment".

The photographic work of Waggerl was first published by Kurt Kaindl in the book Frauenmantel in a comprehensive monograph.