The title of this article is ambiguous. For retouching prehistoric stone implements of the same name, see retouching (archeology) .

Retouching ( French: retouche = 'improvement', literally: touching again) is the subsequent change to a surface or a photo (often by hand) or a computer graphic. This term is used in photography , printing former production , digital image processing , optics , restoration and the production of high-precision mechanical parts. In photography, retoucher and in repro technology , the term re- retoucher was used as a professional title.

Beauty retouching, on the other hand, is not a retouching process, but a special form of photo manipulation that makes use of many retouching techniques . 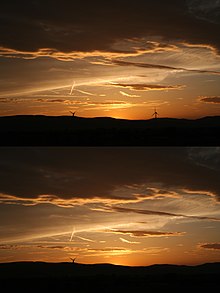 Pollution and wind turbine have been removed

Franz Hanfstaengl won a gold medal at the Paris World's Fair in 1855 for showing retouched photographs, which is why he is considered the inventor of negative retouching. It is known, however, that Fox Talbot also gave instructions to “clean” pictures of stains. How difficult it was to deal with retouched images at the beginning is illustrated by the following quote.

““ The retouch was decisive for the further aesthetic development of photography. With it began the artistic decline of photography, because if it is not used with the utmost caution, the characteristic property of photography, the faithful reproduction, is canceled out by it. The misuse of retouching that began now completely stripped photography of its essence. ""

When using glass plates and later on 9 × 12 or 13 × 18 cm negatives, after development with a very soft pencil (5W) on the layer side of the negative, shadows and small wrinkles could be lightened with fine hatching. A lot of experience was required for this, the pressure with the pencil tip could not be so strong that the emulsion layer was damaged, but it had to be so strong that the negative was covered by the abrasion of the graphite. By applying a very thin layer of matt olein, the negative was protected and a pencil retouch was easier to carry out.

The pencil had a narrow, sharpened lead that was around 2 cm long and was moved as flat as possible over the negative in looping and circular movements so that the retouching structure was not visible.

Larger areas were worked on with small, firm cotton balls (wipers), brushes and graphite powder. The graphite powder was an abrasion from the lead and was collected in small boxes by experienced retouchers. Graphite blackened the tips of the fine silver grains, whereby a grain structure could be seen when enlarged.

When retouching the brush with glaze paints, the heavily diluted glaze paint was applied several times to the damp negative until the desired coverage was achieved. The glaze paint stained the gelatin layer of the negatives evenly; the moistened negative avoided uneven, cloudy halftones. While working, the brush was not allowed to be lifted from the layer (drop formation!) And had to absorb the rest of the paint at the end. If the layer was damaged, except for the substrate, a glaze was only possible on the substrate side.

By abrasion or scraping of the silver particles embedded in the gelatin, the coverage of a negative should be reduced when scraping. In this way, complete negative parts could be removed.

Retouching brushes were made from red sable hair in strengths 1 (extremely fine) to 5 (normal). The most common brush sizes were 2 and 3; 1 was so fine that the brush body could hardly absorb paint, with 2 and 3 enough paint was taken up by the brush to ensure even work and not to get any disturbances from renewed brush attachment. After the work was finished, the brushes were cleaned with water and a cardboard tube (straw) was placed over them to protect the tip.

Retouching tools for scraping consisted of three steel knives that were shaped like a scalpel, spatula and lanceolate. Oil and water grinding stones were used for regrinding. 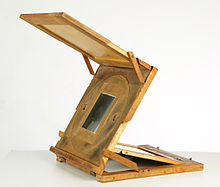 Negative retouching was carried out on the retouching desk or on a frosted glass pane illuminated from below. A retouching desk consisted of three wooden frames connected with angles, in the bottom there was a tiltable mirror that reflected the light onto the negative to be processed from below. The negative was on a frosted glass pane which was attached to a bogie in the second frame. So you could rotate your negative while working without touching it. The third frame was stretched diagonally across the work surface to keep the skylight clear. The angles between the frames can be adjusted.

Chemical change (weakening and intensifying the black and white negative)

In order to partially or completely reduce the coverage of the negative, the metallic silver was chemically removed from the layer. To use the came Farmersche attenuator (sodium thiosulfate + Kaliumhexacyanidoferrat (III) + water) and potassium permanganate reducer (potassium permanganate + conc. Sulfuric acid + water). After thorough rinsing, the negative to be treated was either completely immersed in a bowl with attenuator using a pair of pliers and gently moved, and then immediately rinsed under running water. This process could be repeated several times, a batch of Farmer's solution lasted about 30 minutes. With partial weakening, the negative was placed on a frosted glass pane after soaking, the water droplets were wiped off and the solution was dabbed onto the negative with a firm cotton ball. Here, too, the subsequent watering.

In the case of the reinforcement technique, the negative was also partially or completely treated with a solution that increased the image substance and thus improved copying properties. In the case of the copper intensifier, the negative was given a copper-red color. You worked with a cotton ball on the damp, well-watered negative or you dipped the complete negative into the solution. The solution approach lasted about 30 minutes. Here, too, you had to work with pliers, copper enhancers also intensely colored skin and lab coats.

Parts of the image that were not to be treated were protected with a masking lacquer (made from a graphite solution).

Scraping retouching to reduce blackness is only possible with baryta papers with a matt or semi-matt surface; the retouching is visible on glossy surfaces. The retouching set was used as with the negatives, since the emulsion in paper was much thinner than in film, only small corrections could be made in this way.

Marten hair brushes and Keilitz colors or pure black, reddish brown (retouching I), brownish black (retouching II) and blue black (retouching III) were used to spot light defects. One drop each of the desired colors was placed on a larger white matt glass pane and the colors were allowed to dry out. Now, if necessary, the photographer could pick up a little color with a damp brush, create the desired shade of gray and carefully dab it on the photo. The control of the color mixture was carried out on the back of a reject photo, as this paper had the same absorption behavior as the photo. The accuracy of the result depended on the skills of the retoucher. With matt or grained paper surfaces, the well-executed retouching remained invisible, with glossy surfaces the photo could be varnished afterwards.

Retouching for black and white positives, cold and warm gray to black tones

The blotting out of bright image disturbances also worked for color photos with a matt or grained surface, here the photographer needed a larger color palette. Wedge paints and retouching pens from various manufacturers were used. 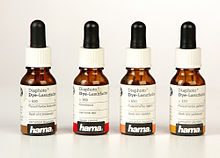 Retouching colors for applying a few drops to a palette, after they have dried, they can be picked up and mixed with a damp retouching brush

When applying glaze paints to a black and white photo (coloring), diluted paint was applied to the damp photo using a retouching brush in several steps. Excess paint had to be removed immediately with a cotton ball; flaws could not be completely removed by soaking.

Black-and-white photos on baryta paper could be made brighter and clearer in the lights by briefly treating them with a highly diluted attenuator (using a cotton ball). The contrast impression could be improved in this way. Bathing the black-and-white photo in a copper enhancer changed the image tone towards red, while bathing in an infusion of strong black tea produced an image tone towards deer brown (own experience).

Photo of a cable is prepared for printing with the help of spray retouching, ca.1980

Air brush: Air brushes (small spray guns) were used for large-scale corrections or image enhancements and surfaces, gradients and backgrounds were created with thin black, white or colored glaze paints or opaque white. The atomization made the paint application so fine that it hardly differed from the surface of the photo. Image elements could be left out with templates made of individually cut, covering celluloid foils. The compressed air required for atomization came from steel cylinders with compressed carbon dioxide or from stationary compressors . Spray retouching was used in repro and advertising photography.

Positive retouching was an apprenticeship (now a media designer) in the graphic printing form production. Using the means of analog retouching, he eliminated errors or unwanted parts of the image, increased contrasts or smoothed overly grained photographic originals before he passed them on to the reproduction photographer for recording.

Digital retouching: Disturbing parts of the image have been removed

In philately , retouching means re- engraving or repairing a mistake on the printing plate or individual clichés . With this revision you can not only eliminate engraving errors, but also achieve a better printing effect. Signs of wear and tear and pressure damage are also eliminated.

New arch types are created through re-engraving or retouching. These are particularly interesting for special collectors. New plate defects can also be caused by retouching.

The retoucher of the printing plates is generally the engraver of the stamp . The retouching is done manually.

In France , since October 1, 2017, photos that have been modified in such a way that the body silhouette appears to be changed, according to a decree of May 4, 2017, must bear the notation photograpie retouchée when published for commercial purposes . Otherwise, there is a risk of fines of up to 37,500 euros. Retouching of the face is not affected.