The disguised National Socialist Association of German Writers in Austria was founded in November 1936 by former PEN Club members under the presidency of Max Mell . The members worked energetically towards the annexation of Austria to the German Reich in order to “pave the way for the liberation of their people and to complete it” , and welcomed the invasion of Hitler in 1938 with a “confession book” to the “Third Reich”.

The founding of the federation was a reaction to a resolution against the book burning in March 1933 in the German Reich and the persecution and incarceration of fellow German writers, which was carried out in June 1933 by 25 members of the PEN Club after the XI. Congress of the international PEN club from 25 to 28 May 1933 in Ragusa (Dubrovnik) was signed, including later emigrants such as Raoul Auernheimer , Franz Theodor Csokor , Ernst Lothar , Alma Wittlin and Friedrich Torberg . The writer Ernst Toller had accused the National Socialist regime in Germany at this conference and accused the German PEN delegation of supporting the proceedings by keeping quiet. He also criticized the anti-Semitic orientation of the German PEN.

This led to the formation of a faction among the Austrian authors when the delegates Grete von Urbanitzky and Felix Salten did not join the protest against the book burning initiated by Toller. The “German-friendly” and Nazi-minded members in Austria withdrew from the PEN Club, including Max Mell , Richard Billinger , Bruno Brehm , Robert Hohlbaum , Mirko Jelusich and Josef Weinheber . Several attempts followed to organize the Austrian “singers of German heroism” and “priests of the German heart”. After the July Agreement between Adolf Hitler and the Austrian Chancellor Kurt Schuschnigg , the “Association of German Writers Austria” was established in November 1936 under the presidency of the Catholic Greater German Max Mell.

On April 30, 1933, the Wiener Arbeiter-Zeitung wrote: “The Third Reich needs lackeys [...] A poet's spring should be green on mounds of corpses. [...] Goebbels invited for tea - the writers had to choose: spirit or power, character or business, valiant isolation or cowardly conformity . You have chosen. The men went into exile, the creatures went to tea. "

Franz Theodor Csokor, like many of his colleagues dependent on the German market, wrote on May 19, 1933: “You just have to decide: good business - or a good conscience? I am in favor of the second - at all risk, even that of an emigration, in case the brown magic should take hold with us! "

And Kurt Tucholsky also wrote in 1933 about the takeover of the “vacated” places by opportunistic fellow writers: “They are now crawling out of all the holes, the little provincial whores of literature, now finally, finally the Jewish competition is gone - but now! [...] life stories of the new heroes. And then: Alpenrausch and Edelweiss. Mat green and furrow. Schollenkranz and Maienblut - you have no idea, level zero. "

In the Association of German Writers in Austria, the members and sympathizers of the NSDAP came together to form an illegal cover organization. Membership in the NSDAP, which was banned in Austria since 1933, is secured for 50% of the members.

Since the National Socialist writers of Austria already had a well-developed infrastructure in 1938, they succeeded in constituting the Reichsschrifttumskammer , provincial management of Austria, immediately after the annexation . The managing director of the Association of German Writers Austria, Max Stebich , also became managing director of the Reich Chamber of Literature in Austria and held this position until 1940. Franz Spunda became the country leader of the Reich Association of German Writers for Austria.

The Austrian PEN Club was dissolved in 1938, and the center's assets and archives were confiscated. 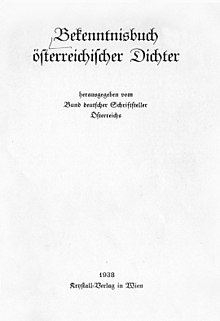 In 1938 the association published the Confession Book of Austrian Poets in Vienna's Krystall-Verlag , in which the authors enthusiastically welcomed the “Anschluss” .

Max Stebich described the task of the poets, who were called "singers of German heroism, priests of the German heart" , as follows:

"[...] The goal of their struggle, which they waged with the flawless weapons of the spirit, was the same goal that all upright German poets wrote on their flags in past centuries: a single, free, happy and eternal Germany, a Germany, that embraces all who are of the same blood and language. [...] "

In 1945, the “Association of Democratic Writers and Journalists Austria” (VdSJÖ) was founded under Edwin Rollett , with the aim of eliminating authors who had been burdened by National Socialism from the literature business.

After the war, numerous members of the Association of German Writers in Austria were included in the list of banned authors and books , which was published by the Federal Ministry of Education in January 1946 and contained works “whose content clearly pursued National Socialist or fascist ideologies”. It listed around 1,600 authors and a number of non-fiction titles that were banned from printing, sales and distribution, including Bruno Brehm, Gertrud Fussenegger , Mirko Jelusich, Josef Friedrich Perkonig, Friedrich Schreyvogl, Karl Hans Strobl, Ingeborg Teuffenbach , Franz Tournament and Josef wine lifter.

Some authors of the Association of German Writers in Austria can also be found on the "Dichterstein" in Offenhausen in Upper Austria, which was built in 1963 by the Dichterstein Offenhausen Association and on which the names of around 400 ethnic and National Socialist poets are engraved on the bricks and tablets . The poet's stone is a "stone made contribution to saving the honor of the Nazi authors discredited and 'incriminated' 'in 1945" . The association was founded in 1963 by Joseph Hieß , a racist and anti-Semite who was imprisoned in the allied war crimes camp Glasenbach from 1945 to 1948 .

At the Institute for German Studies at the Karl Franzens University in Graz , a department entitled “Austrian Literature in National Socialism” was set up in 1986.