Caspar Anton Freiherr (from 1782 Count ) von der Heyden called Belderbusch (born January 5, 1722 in Montzen ; † January 2, 1784 at Miel Castle near Bonn ) was a Teutonic Knight and Commander of Alden Biesen . From 1755 he was President of the Court Chamber and from 1767 Prime Minister of Kurköln .

Caspar Anton was a member of the Von der Heyden family, called Belderbusch . His parents were Vincenz Philip Anton Freiherr von der Heyden called Belderbusch (* January 21, 1690 - March 23, 1771), Aachener Schöffe, Herr von Montzen, Streversdorp and Donrath, and Maria Clara Eugenia von Westrem (* May 14, 1687 in Gutacker; † September 30, 1775). He was the third of five children; one of his brothers was Johann Ernst Theodor von Belderbusch . Their place of birth was probably at Streversdorp Castle, where he was baptized in the castle chapel there. Together with his oldest brother, Maximilian Wilhelm, he attended the Jesuit grammar school in Aachen from 1732 to 1734 , where he was one of the best students. Throughout his life he was critical of the Jesuit order.

When he finished school it was already clear that he should join the Teutonic Order . Therefore, from 1734 to 1746 he was a page at the Bonn court of Cologne Archbishop Clemens August I of Bavaria , who was also Grand Master of the Teutonic Order. The page service should provide the future knight with appropriate knowledge and skills. On the side he finished his school education and then attended philosophical and legal lectures. 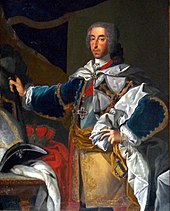 In 1740 he applied for admission to the Teutonic Order. In doing so, he encountered considerable resistance, which two letters from Grand Master Clemens August to the Land Commander of Alden Biesen , Damian Hugo Philipp von Schönborn-Buchheim , could not remedy. Now he attended the University of Leuven at the expense of the Cologne Elector and Archbishop , where he obtained a licentiate in both rights on April 28, 1741. The archbishop, with whom he had obviously made himself popular and who constantly endeavored to be accepted into the order, appointed him treasurer in 1745 (with an annual salary of 400 Reichsthalers) and cornet of his bodyguard.

Since the Order's government could not withstand the constant pressure of its Grand Master, it granted Belderbusch admission to the Order in 1748, so that at the end of March 1748 he could begin his novitiate , deviating from the order's rule, at the Bonn court and finally by Clemens August on April 13, 1749 in Paderborn Jesuit church to knight was beaten. In 1749 he was Komtur in the Kommende Ramersdorf , 1751 in Sint-Truiden -Ordingen, from 1758 to 1762 in the Teutonic Order of St. Aegidius in Aachen and from 1762 to 1766 in Gruitrode .

Belderbusch, who was also his Grand Master's travel companion, was appointed President of the Electoral Cologne Court Chamber and Supervision Commissioner on August 17, 1755 , and on September 10, 1755, he was appointed to the Privy Council .

Because Belderbusch was constantly opening up new sources of finance for his master, he achieved a rapid career in the order, which also led to increasing income for himself and, under pressure from the Grand Master, on December 15, 1757, to his election as coadjutor of the Landkomtur von Alden Biesen . He took over this office after the incumbent's death on November 27, 1766. He seldom stayed at the magnificent Alden Biesen Castle. However, he built extensive new buildings there that are still in existence today. He mainly used the high income from the coming years to increase his private fortune. So special deer and roe deer were bred there for resale. Otherwise he had the balley administered by her secretary and the rent master. 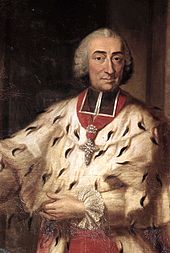 When Archbishop Clemens August died on February 6, 1761, the Cologne cathedral chapter elected its cathedral dean, Maximilian Friedrich von Königsegg-Rothenfels , as the new archbishop. This pious but politically rather weak confirmed Belderbusch as a proven financial expert of the electoral state as early as May 9, 1761 in his office as president of the court chamber. Gradually, this also attracted other departments. On September 19, 1766, he became secret conference minister and, with the death of Prime Minister Franz Christoph Anton von Hohenzollern-Sigmaringen in 1767, effectively combined all government functions in his hand, including in 1768 the appointment as permanent representative at the state parliaments in the Archbishopric and in Westphalia came.

In the years that followed, he succeeded not only in consolidating state finances and electing the archbishop as Prince-Bishop of Munster , but also in increasing the modernization of the state. The founding of the University of Bonn is largely due to him. Here, however, there was a conflict with Grand Master Karl Alexander von Lorraine , who had been in office since 1761 , who asked him on August 18, 1773 to return to his commandery. It is possible that Karl Alexander, a brother of Emperor Franz I Stephan, who died in 1765, and thus Maria Theresa's brother-in-law , thereby also intended to weaken the Elector of Cologne, who in the previous Seven Years' War had tried to avoid a decision for Austria against Prussia and instead opted for the Protestant Had approximated States General ; Friedrich II of Prussia had already supported his election as Archbishop of Cologne. For Belderbusch this would have meant the end of his career if the archbishop had not expressly asked the Grand Master on August 30, 1773 to leave him, since he was dependent on his abilities. Belderbusch had previously entertained the prince-bishop and his court for 14 days in his castle in Alden Biesen.

The relationship with the Grand Master must have improved shortly afterwards, because on April 8, 1774, at the Viennese court, Belderbusch tried to secure the title of Imperial Privy Councilor. By this time Belderbusch had already swung into the path of imperial politics, so that he actually received the title in 1776. In May 1775 he had proposed to Empress Maria Theresa that one of her sons should seek the dignity of Archbishop of Cologne, for which Belderbusch wanted to prepare the political ground. In fact, the youngest son, Maximilian Franz of Austria , was elected coadjutor by the Cologne cathedral chapter in 1780. This brought the baron and his three nephews the long-awaited imperial count on February 2, 1782 , which he could not enjoy for long, however, as he died in 1784 at his Miel Castle, which was built between 1767 and 1772 . The news of the additional election of Maximilian Franz of Austria as the new prince-bishop of the bishopric of Münster could no longer be conveyed to Empress Maria Theresia, but this was done through his deputy, councilor Heinrich-Johann von Droste zu Hülshoff .

For over 20 years, Belderbusch had a relationship with the abbess of the Vilicher women's monastery , Caroline von Satzenhofen , for whom he kept a room in his hunting lodge Miel; Under Elector Clemens August, the mistress tavern at the Bonn court was commonplace, but the relationship between two clerical officials was rather unusual; Belderbusch therefore dealt with it even more discreetly under the pious Archbishop Koenigsegg. He held it similarly in his efforts to acquire property for his family. In doing so, however, he could also be tough with his relatives if they did not act according to his ideas and wishes, which he proved with the removal of his nephew Carl Leopold from the Bonn court.

Belderbusch himself was a reliable man who was used to the fact that even the slightest of his tips would be followed. The possibility of a violation was not an issue for him and any difficulties he wished to be resolved immediately. The Prime Minister, who was used to command, always knew how to remove any resentment or resignation through his experience with people. He knew how to employ ambition, a considerable measure of ruthlessness and the use of the carrot and stick .

Commander of the Teutonic Order in Aachen