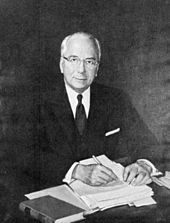 Lewis Lichtenstein Strauss junior (* 31 January 1896 in Charleston , West Virginia ; † 21st January 1974 in Brandy Station , Virginia ) was an American politician ( Republican Party ), businessman, banker and an officer in the US Navy . As a leading member of the United States Atomic Energy Commission , Strauss was instrumental in the political decision to build the first hydrogen bomb " Mike ".

Lewis Lichtenstein Strauss was born on January 31, 1896 to Lewis Strauss senior and his wife Rosa Strauss, née Lichtenstein, in Charleston. Strauss spent most of his childhood in Richmond . After finishing school, Strauss trained as a businessman and worked in his family's shoe wholesale business. In 1917 he met Herbert Hoover for the first time , with whom he helped the Belgian American Educational Foundation as a volunteer during the First World War to provide food for soldiers returning from Europe. After the war, Strauss was close friends with Hoover, and he also supported Hoover's successful candidacy for president in 1928 . He had previously joined Kuhn, Loeb & Co. in 1919 and married Alice Hanauer, the daughter of a business partner, in 1923. Strauss was politically active in the Republican Party; in 1928 he was a representative of Virginia on the Republican National Committee .

Time in the Atomic Energy Agency

In 1946, Strauss was appointed to the United States Atomic Energy Commission (USAEC) by the Democratic President Harry S. Truman . Strauss served here until 1950. Three years later, he was reappointed to the commission by President Eisenhower and this time became chairman - an office he held until 1958. However, Strauss only accepted his chairmanship on condition that Robert Oppenheimer had no advisory role in the commission. He was also the driving force behind the revocation of Oppenheimer's security authorization in 1954. In the course of the Cold War and the associated "arms race" between the United States and the Soviet Union , the decision had to be made by then President Truman due to the successful nuclear test of the Soviet Union whether an even more powerful bomb - the hydrogen bomb - should be built. While the leadership of the USAEC under David E. Lilienthal was against the construction of a hydrogen bomb and rather had the intention of producing more nuclear weapons while at the same time controlling the construction of nuclear weapons internationally, Strauss clearly advocated the planning of a hydrogen bomb. In January 1950, after energetic efforts by Strauss, Truman agreed to the proposal to build such a bomb and justified his decision with the fact that "he [...] must ensure that [America] can defend itself against every possible enemy." On November 1, 1952, the first thermonuclear explosive device Ivy Mike was detonated in the Marshall Islands . Operation Castle , a series of US nuclear weapons tests , also fell under Strauss' tenure as chairman of the Atomic Energy Agency .

On November 10, 1958, Strauss took over the office of Secretary of Commerce of the United States on a provisional basis , succeeding Sinclair Weeks . After serving in Eisenhower's cabinet for almost a year , his office as Secretary of Commerce should be confirmed by the US Senate . However, Strauss could not win the vote, but lost with 46:49 votes. After his defeat in the vote, he was replaced on August 10 by Frederick H. Mueller and withdrew as much as possible from political affairs.

The American polar explorer Richard Evelyn Byrd named the Strauss Glacier in Antarctica after him.