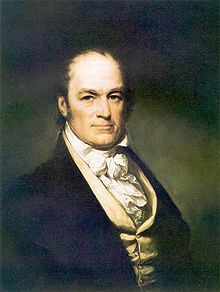 William Harris Crawford (born February 24, 1772 in Amherst County , Colony of Virginia , † September 15, 1834 in Crawford , Georgia ) was an American politician who served as Treasury Secretary and Secretary of War in the cabinet of the United States and the state of Georgia in Senate represented.

William H. Crawford moved his family to Appling County , Georgia , when he was ten . There he later worked as a farmer and then as a school teacher for ten years. He studied law on the side and began working as a lawyer in Lexington in 1799 . In 1804 he was elected to the Georgia House of Representatives as a member of the Democratic Republican Party . From 1807 he represented the state of Georgia as a senator in the US Congress , where he soon became very popular and in 1811 was elected president pro tempore . After the death of Vice President George Clinton on April 20, 1812, he would have been the successor of President James Madison if he had died or otherwise had defaulted under the rules at that time .

During the British-American War of 1812 he was sent to Paris as ambassador by President Madison . He himself was one of the proponents of the war with Great Britain. In 1815 Madison appointed him as Secretary of War in his cabinet ; a few months later Crawford moved to the Treasury. He remained in this post from 1817 under his successor James Monroe . In 1825 he resigned from the government and, since he had lagged behind his rivals Andrew Jackson and John Quincy Adams as a presidential candidate and played no role in the subsequent runoff by the House of Representatives, retired to Georgia, where he worked as a judge.

His last place of residence has been named after him since 1876, as have several counties in the USA.

United States Secretary of the Treasury