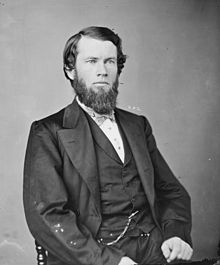 Thomas White Ferry (born June 10, 1827 on Mackinac Island , Michigan , †  October 13, 1896 in Grand Haven , Michigan) was an American politician ( Republican Party ) who represented the state of Michigan in both chambers of Congress .

At the time of Thomas Ferry's birth, his father, the Reverend William Montague Ferry, was a Presbyterian minister on Mackinac Island. He ran a mission school there with his wife Amanda. On the island in Lake Huron , in addition to a military garrison, the main depot of John Jacob Astor's American Fur Company was housed. The family later moved to Grand Haven, where young Thomas attended public schools and found employment in the commercial sector. From 1843 to 1845, he worked as a salesman in a shop in Elgin ( Illinois ), before returning to Michigan.

Ferry was a member of the Michigan House of Representatives from 1850 to 1852 ; In 1856 he was a member of the State Senate . After the Civil War he took part in 1866 as a delegate at the National Union Convention in Philadelphia , but failed to achieve the goal of forming a party of national unity with the National Union Party . As a Republican, Ferry became a member of the United States House of Representatives in 1865 , where he remained until March 3, 1871. He was also elected in the 1870 election, but was soon elected US Senator by the Michigan Parliament. After being re-elected, he was able to exercise this mandate until March 3, 1883; a third attempt in 1882 failed. Ferry was the first politician to serve in both houses of the Michigan State Legislature and both houses of Congress. As a second person, this only applied to Debbie Stabenow in January 2001 when she was elected to the US Senate.

In the Senate, Ferry served from March 9, 1875 to March 17, 1879 as President pro tempore . Thus, he was in the succession of President Ulysses S. Grant after the death of Vice-President Henry Wilson on November 22, 1875 in first place. In his own opinion he was president for one day: on March 4, 1877. On that Sunday, Ulysses S. Grant was no longer president, while his successor Rutherford B. Hayes was not officially appointed to office until the following Monday. However, Hayes took his oath of office on March 4th in a private ceremony, which complied with the requirements of the constitution.