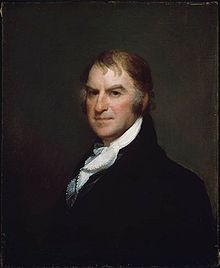 Theodore Sedgwick (* 9. May 1746 in West Hartford , Connecticut Colony ; † 24. January 1813 in Boston , Massachusetts ) was an American politician ( Federalist Party ), Senator from Massachusetts and the fifth speaker of the House of Representatives of the United States .

Theodore Sedgwick attended Yale University in New Haven , Connecticut, where he studied theology and law . He dropped out, but continued his law studies under Mark Hopkins, the grandfather of Mark Hopkins, who later became president of Williams College . In Great Barrington he was admitted to the bar in 1766, where he first worked. He later moved to Sheffield and was involved in the invasion of Canada during the War of Independence .

On April 17, 1774 Sedgwick married his second wife, Pamela Dwight (born June 26, 1753, † September 20, 1807), the daughter of Brigadier General Joseph Dwight of Great Barrington and Abigail Williams Dwight. Pamela was the granddaughter of Colonel Ephraim Williams, founder of Williams College. She and Sedgwick had ten children together, three of whom died in the first year after birth. They had the following sons:

In 1780 Sedgwick was one of the first members of the American Academy of Arts and Sciences .

The political career of the federalist Sedgwick began as early as 1780 as a member of the House of Representatives of Massachusetts , to which he belonged again from 1782 to 1783 and from 1787 to 1788, where he was temporarily speaker of this Chamber of Parliament. Between 1784 and 1785 he was a member of the Massachusetts Senate ; he also took part in the sessions of the Continental Congress in 1785, 1786 and 1788 . In March 1789 he entered the US Congress . In 1796 he succeeded Caleb Strong as a US Senator, which he remained until 1799. During this time he was Senate President pro tempore for half a year in 1798 . He then became Speaker of the House of Representatives for a term until 1801 . After becoming a judge on the Supreme Court of Massachusetts in 1802 , Nathaniel Macon succeeded him in the position of Speaker of the House of Representatives. He himself remained a Supreme Court judge until he died in Boston on January 24, 1813. He was buried in Stockbridge .

As a lawyer, he represented Elizabeth Freeman (called Mumbet) in court, a black slave who fled from her owner because he treated her cruelly. The court ruled that she was free and made her the first case on the Massachusetts Bill of Rights , which guaranteed freedom and equality for all. That decision was later confirmed after Sedgwick himself became a judge on the Supreme Judicial Court of Massachusetts. In gratitude, Mumbet joined the Sedgwick family and remained the family housekeeper for the rest of her life. She is also buried in the Sedgwick family crypt, her grave is marked with a statue of Theodore Sedgwick's daughter Catharine Maria (1789–1867), the first female author in the United States. A similar case was that of Quock Walker .

Speaker of the United States House of Representatives