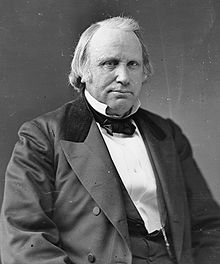 Henry Wilson (born February 16, 1812 in Farmington , Strafford County , New Hampshire , †  November 22, 1875 in Washington, DC ; actually Jeremiah Jones Colbath ) was an American politician and Vice President of the United States from 1873 until his death . He had previously represented the state of Massachusetts in the US Senate from 1855 .

Henry Wilson was born as Jeremiah Jones Colbath in New Hampshire and was given up for adoption by his father when he was ten years old because of poverty to the farmer Henry Wilson. He had his name changed to Henry Wilson in 1833.

Wilson moved to Natick , Massachusetts in 1833 , learned the shoemaking trade and pursued political and economic studies in addition to the trade. In 1840 he appeared in public as a supporter of the Whigs and was a member of both chambers of the Massachusetts General Court between 1841 and 1852 , where he founded the Free Soil Party in 1848 . From 1848 to 1851 he also ran his own newspaper, the Boston Republican, as an editor . In 1855 he joined the Know-Nothing Party and was elected as a Senator from Massachusetts in Congress by a coalition of that party with the Free Soil Party and opponents of slavery in the Democratic Party . He later joined the Republicans . He was a senator until March 3, 1873, during which time he was, among other things, Chairman of the Military Committee .

During the American Civil War in 1861 he served briefly as a staff officer under General George McClellan . In 1872, Wilson was named running mate of presidential candidate Ulysses S. Grant after incumbent Schuyler Colfax was not nominated again because of a series of scandals. After Grant's election victory , Wilson was sworn in as the new Vice President on March 4, 1873. After taking office, however, not uncommon for the time, he did not exercise any significant influence on government policy. He died after a stroke on November 22, 1875 in the Washington Capitol before the end of his term. The office of Vice President remained vacant until 1877, as, according to the legal situation at the time, it could only be filled by popular elections every four years.

Vice President of the United States