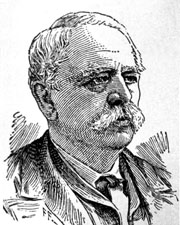 Homer Virgil Milton Miller (born April 29, 1814 in Pendleton District , South Carolina , †  May 31, 1896 in Atlanta , Georgia ) was an American politician who represented the state of Georgia in the US Senate .

Born in what is now Anderson County , Homer Miller moved with his parents to Rabun County , Georgia in 1820 . He attended the local public schools and graduated from the Medical College of South Carolina in Charleston in 1835 . He then traveled to Paris for further medical studies ; on his return he began practicing as a doctor in Cassville .

Miller initially joined the Whig Party and in 1844 ran unsuccessfully as its candidate for a seat in the House of Representatives of the United States . During the Civil War he served as a surgeon in the Confederate Army ; while he was also responsible as a hospital inspector for Georgia. After the war he worked as a doctor in Rome . He was also on the faculty of Atlanta Medical College .

In 1867 Miller participated in his state's Reconstruction Convention. After the resumption of Georgia into the Union, he was elected for the Democratic Party in the US Senate, where he remained from July 28, 1868 to March 3, 1871; however, he was not recognized as a full member of the Chamber of Parliament until February 24, 1871. He subsequently became a curator at the University of Georgia in Athens . Miller died in Atlanta in 1896 and was buried in Rome.