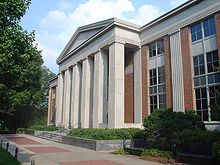 The university shapes the city of Athens both culturally and politically.

The university was founded on January 27, 1785. The first president of the university was the politician and US Senator from Georgia, Abraham Baldwin , from Connecticut , educated at Yale . He was one of two University of Georgia leaders who helped sign the United States Constitution . The second was William Few .

The actual establishment of the university took place in 1801 after the appropriate land on the banks of the Oconee River had been selected. The first building was initially named after Benjamin Franklin Franklin College and is now known as the Old College . The first class of students graduated in 1804. Since 1843 law has also been taught in addition to the “classic” subjects (English, history, natural sciences) . There have been courses in agriculture and mechanics since 1872.

A wooden fence used to protect the university from cattle. In 1858 the fence was replaced by an iron fence and "The Arch" (the archway). It is said that freshman students used to step over the fence to leave university.

During the American Civil War , the university closed in October 1863 and reopened in January 1866 with 87 students.

Only white men were allowed to study for the first hundred years. Women were first admitted to summer courses in 1903 and, from 1918, also to regular studies. Mary Lyndon became the first woman to receive an MA from university in 1914 . The first woman to get a bachelor's degree was Mary Creswell, who received a BS in home economics in 1919 . Creswell Hall and Mary Lyndon Hall women's student residences are named after them. Charlayne Hunter and Hamilton E. Holmes were the first accepted African American students. They were not admitted until the end of segregation in 1961.

The university has 14 colleges and schools :

The University of Georgia is a member of the Southeastern Conference . Their sports teams call themselves Bulldogs . The home ground is the Sanford Stadium with a capacity of 92,746 spectators.