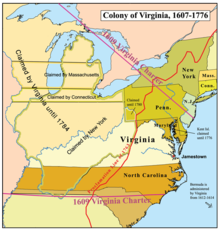 Virginia referred to an area that later included the US states of Virginia , West Virginia , North Carolina , Kentucky , Tennessee and Ohio . The capital was Jamestown (1607–1699) and Williamsburg (1699–1776). Virginia was given the name by Walter Raleigh in the course of his 1584 expedition in honor of Queen Elizabeth I of England when he founded the first settlement on Roanoke Island . The unmarried Queen nicknamed the "Virgin Queen" ( Virgin Queen ). In addition, from the colonialists' point of view, it was about the settlement and reclamation of such a land.

In Virginia, the first attempts at settlement by the English were made by a company called the Virginia Company , which founded the Jamestown settlement in 1607 . At that time the English government did not have the money to finance such expensive and unsafe expeditions. Initially, the colonization attempts had only moderate success. Of the 144 men who started in England in December 1606, only 38 were alive nine months later. 39 had died during the crossing, 67 in the first nine months after arriving at the coast. Famine was also not uncommon, but more and more English people took the opportunity and emigrated to Virginia. The colony was in dire straits during the English Powhatan Wars. The second governor of the colony, Lord De La Warr , stabilized the situation. Real improvement only came when John Rolfe planted the first tobacco plants in Virginia in 1612 , which he had probably brought with him from Trinidad . In 1618 tobacco was exported for as little as 20,000 pounds. In 1619 the House of Burgesses was established as a legislative agency in the colony.

The second war with the Powhatan began in 1622. As a result, the Virginia Company of London ran into financial difficulties, which in 1624 led to the conversion of the area into a royal colony . In 1638 Virginia exports totaled three million pounds. In 1676 there was the Bacon's Rebellion , a rebellion led by Nathaniel Bacon against the Governor Sir William Berkeley . German immigrants from Siegerland founded the Germanna colony in 1714 . Germanna was to Germany ( Germany and the then British Queen) Anne named.

The Parson's Cause over the remuneration of the Anglican clergy as a result of the Two Penny Acts (1755, 1758) anticipated fundamental questions about the relationship of the Kingdom of Great Britain to the British colonies.

Home to many of the founding fathers , notably Patrick Henry , Thomas Jefferson , Richard Henry Lee , James Madison , George Mason and George Washington , Virginia played a prominent role in the American independence movement . The British colonial rulers were finally expelled from Virginia after the lost Battle of Great Bridge on December 9, 1775. The Convention of Virginia , which met in Williamsburg , declared the colony independent on May 15, 1776. As part of the work on a constitution, on June 12, 1776, he unanimously passed a fundamental rights declaration largely formulated by George Mason - the Virginia Declaration of Rights . A few weeks later, the convention finally elected Patrick Henry as the first governor of Virginia. With the adoption of the United States' Declaration of Independence by the Continental Congress on July 4th of that year, the Commonwealth of Virginia became one of the thirteen founding states of the United States .