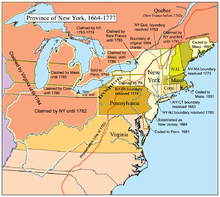 In 1664, shortly before the beginning of the second Anglo-Dutch naval war , the capital of the colony Nieuw Nederland (which had incorporated the Swedish trading base New Sweden in 1655 ) was conquered by the British. In the Peace of Breda in 1667 the Netherlands ceded the colony to England. In the Third Anglo-Dutch War , the colony was occupied again for 15 months by the Dutch under Cornelis Evertsen , but finally fell to the British crown in the Peace of Westminster in 1674.

In what is now New Jersey, two proprietary lordships (owned by the Lord Proprietors ) were formed:

During the American Revolutionary War , New Jersey was the scene of around 100 battles, including Trenton in 1776, Princeton in 1777 and Monmouth in 1778. As early as 1776, New Jersey's first constitution was passed, which guaranteed all residents above a certain level of ownership the right to vote . This meant that white and black men and widows could vote, but not married women, as they were not allowed to own property. New Jersey was the seat of the first US government to emerge from the Continental Congress for a short time , in Princeton in 1783 and in Trenton in 1784. As one of the 13 original states, New Jersey joined the Union in 1787 as the 3rd state.