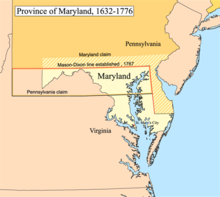 The Province of Maryland ( 1634 - 1776 ) was one of the Thirteen Colonies in North America , in which 1776 United States Declaration of Independence from the mother country Britain renounced.

Lord Baltimore , who in 1632 had received a management license from King Charles I of England for the province , probably named the area after Queen Henrietta Maria , the wife of Charles I.

On March 25, 1634, the first settlers settled in the area. Maryland was the only Catholic among the strictly Protestant British colonies in North America. The first Catholic diocese and the first Catholic cathedral in the USA were built here. The Maryland Tolerance Act was one of the first laws to expressly tolerate other (Christian) denominations and is therefore considered to be the forerunner of the 1st Amendment . It became necessary because over the years more and more non-Catholics populated the colony and thus created a religious counterbalance. Every conflict in England affected the colony of Maryland. During the time of the English Republic under Oliver Cromwell , clashes broke out in Maryland between Puritans who supported Cromwell and the conservative forces who supported the monarchy. The same thing happened in the course of the Glorious Revolution in 1688 , when there was a real coup in Maryland. The previous government was driven out, the Calverts (Lord Baltimore) lost their claims to power and the practice of the Catholic faith was temporarily prohibited. Only in 1715 did the Calverts get their old position back after a conversion to the Church of England .

The Mason-Dixon Line, as the border between the Province of Pennsylvania and the Province of Maryland, was established in 1767 to settle longstanding disputes between the ruling families of Maryland and Pennsylvania, Calvert and Penn. Originally, the royal charter - due to an incorrect map - granted Maryland the territory north of the Potomac River up to the 40th parallel, which would have made Philadelphia , the largest city in Pennsylvania, part of Maryland. The surveyors Charles Mason and Jeremiah Dixon measured a new border, which has also become the traditional border between the so-called northern and southern states .

In 1774 the Assembly of Freemen declared itself the legislature of the colony. With the Maryland Constitution of 1776 Maryland finally renounced Great Britain . With Robert Eden , the last British governor left the former colony in 1776. Thomas Johnson became Maryland's first elected governor in 1777 .

The Province of Maryland Governors

The governor of the Province of Maryland between 1634 and 1776 was: