The Province of Pennsylvania , also known as the Pennsylvania Colony , was a British colony founded by William Penn on March 4, 1681 with the permission of King Charles II of England. Today is on the territory of the US state of Pennsylvania . The colony was ruled by the Penn family until the American Revolution . After that, the colony was one of thirteen colonies that revolted against the British colonial power and declared themselves independent on July 4, 1776 .

The name Pennsylvania is made up of the surname of the founder William Penn and the Latin word silva (en. Sylvania). When it came to naming, there were differences between the British King Charles II and William Penn. Penn wanted to name the colony exclusively Sylvania because of its forest wealth , but King Charles II put a Penn before Sylvania in memory of Williams Penn's father Admiral Sir William Penn , who conquered Jamaica on behalf of the British Crown .

According to Penn's constitution, passed in 1682, the province was ruled by a governor , the owner (Penn), a 72-member provincial council, and a general assembly. The General Assembly was also translated as the Pennsylvania Provincial Assembly, but in contrast to its size, it had little influence. The constitution of the colony was changed in 1683, 1696 and 1701. The last version is also known as the Charter of Privileges and was in force until the American Revolution. However, the revolutionaries later disregarded the constitution and wrote a new constitution based on the principles of the Declaration of Independence, after which a new General Assembly with more rights was established. The current US state of Pennsylvania arose from the constitution.

Relationship with the Native Americans 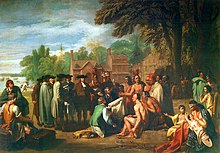 The constitution stipulated fair dealings with Native Americans. This led to significantly better relationships with the Lenni Lenape and Susquehannock tribes present there than other colonies had. William Penn and his successors treated the residents with respect and voluntarily paid them money for their seized land. In addition, the rulers of Pennsylvania did not send any troops to the Indian Wars of the English Kingdom .

In 1737 the relationship turned negative, as the rulers of the province invoked a promise made by the locals to sell or release land to the colony, which began on the Delaware River and, according to a forged contract, should end there " how far a man can walk in a day and a half "(en." as far west as a man could walk in a day and a half. "). The then provincial ruler chose the three fastest runners of the colony and let them run a prepared and previously explored path in order to get as much land as possible. The trail began at the division of the Delaware River and the Lehigh Rivers and was so strenuous that only one of the runners reached the goal 110 km away. The chiefs believed that 60 km was the furthest distance a man could have walked in that time. The distance run now divided the two areas of the tribes, and the rulers asked the natives to immediately vacate the sold area, which was the size of the Rhode Islands (approx. 4900 km²). The Lenape visited the Iroquois tribe and hoped for support, since they had apparently been betrayed by the colonial rulers. However, they had previously made a pact with James Logan, President of the Council, in which the Iroquois assured the colonialists support. The Lenape tried unsuccessfully for 19 years to get their land back. These events are known today as the Walking Purchase .

The Governors of the Province of Pennsylvania

Between 1681 and 1776, the following persons served as governor of the Province of Pennsylvania: