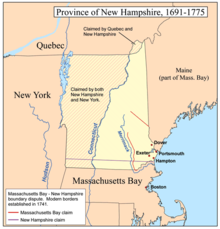 A map of the province of New Hampshire.

The New Hampshire Colony , now the US state of New Hampshire , was the result of several English donations of land between 1623 and 1680. For most of its history, the colony was ruled from Boston , located in the Massachusetts Bay Colony .

The colony's first settlements were in Little Harbor, Dover , Portsmouth and Exeter . The Exeter settlement was founded in 1638 by John Wheelwright , a follower of Anne Hutchinson who had been banished from Massachusetts Bay Province by her Puritan co-religionists. John Wheelwright was sent by John Mason to try to get settlers to start a fishing colony. These cities agreed to unite in 1639 and to join the Massachusetts colony in 1641.

On January 1, 1680, New Hampshire was separated from the colony of Massachusetts and became a royal colony with its own government. It was reunited with Massachusetts in 1688 and last separated in 1691 when it became the royal "Province of New Hampshire". The name probably comes from the southern English county of Hampshire .

The controversial New Hampshire Donation Territory (New Hampshire claimed it but a judge awarded it to New York ) later became the State of Vermont .