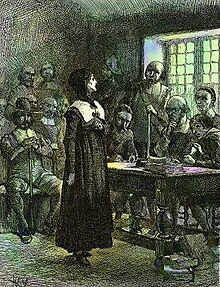 Anne Hutchinson b. Marbury (July 1591 - August 1643 in New Netherland ) was an English theologian and author .

Anne Marbury married William Hutchinson at the age of 21 and followed the religious leader John Cotton to the British colony of Massachusetts in North America with him in 1634 . There she began holding mixed-sex weekly meetings to discuss last Sunday's sermon, which became increasingly criticism of the prevailing religious practice of the Puritans and brought them into conflict with the religious leaders of the settlement. The followers of Hutchinsons also tried to fill important positions in the Church with people they could accept. An attempt was made to replace the pastor in Boston, John Wilson, with Reverend John Wheelwright, a brother-in-law and follower of Hutchinson's. 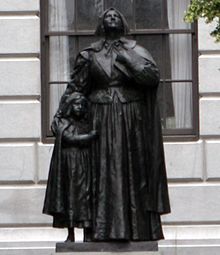 In 1637 she was brought to trial that led to her expulsion from the community and thus to her exile. Since the Puritan clergy did not want to be suspected of persecuting religiously dissenters, the charge was not formulated on the basis of theological differences. Instead, she was charged with abandoning her appropriate domestic sphere as a woman and exercising inappropriate social authority over her group of followers. Also, evidence of sexual permissiveness was seen in her miscarriage.

She and her husband moved to Rhode Island after their conviction , where Anne Hutchinson, along with Roger Williams , who had also been banished from the Puritan society of the Massachusetts Bay Colony , paved the way for the establishment of a religiously liberal colony. Anne Hutchinson later moved to what is now New York State , where she and her entire family were killed in an Indian raid in 1643 .

Anne Hutchinson was of antinomic belief. She believed that there can be no outward signs of divine election. She accused the clergy in Massachusetts Bay of being "legalists" because they saw certain patterns of behavior such as good deeds or church-authorized revival experiences as a sure sign of divine election. Hutchinson refused, thus removing any theological basis from the demand for good behavior in accordance with the rules of the community and therefore also represented a considerable disturbance of public order in the eyes of the clergy.

Their conviction that the chosen ones could not recognize one another by secular signs, but only one another, led the group of their followers to see themselves as an antithesis to the established clergy with their own authority. The spiritual security of the elect made the role of priests as mediators between God and man and as interpreters of God's word superfluous.

A special feature was that Hutchinson was convinced that election was connected with a complete abandonment of all individuality and absorption in God. This unity with God, which in the eyes of Hutchinson made all worldly authority irrelevant, was interpreted as arrogance by her opponents.

The primacy of election and the discarding of the secular person were also the theological basis for Hutchinson, a woman, to be recognized as an authority in the group of her followers. Men and women, if they had the status of “chosen”, were regarded as having equal rights in the group, but they remained in their historical social roles.

Precisely the rejection of active action and the ideal of passive waiting in the religious conviction of being chosen, however, the image of the ideal Christian came very close to the social role of women at the time and thus led to its appreciation. As a result, Hutchinson's theological beliefs gained considerable appeal to women and are also seen as an early form of feminism .

Hutchinson's theological ideas are seen as an important foundation for the strong individualism that developed in US society from the 19th century. The representatives of transcendentalism also saw themselves in their tradition.

Today she is honored by a statue in Boston . Since the 20th century, many have seen her as an early forerunner of feminism and a fighter for human rights and tolerance. In addition, she was the only woman who helped found one of the US states. In 1987, Anne Hutchinson was pardoned by Massachusetts Governor Michael Dukakis and the banishment that his predecessor John Winthrop had pronounced 350 years earlier was lifted.

It also found its way into the visual arts of the 20th century. The feminist artist Judy Chicago dedicated one of the 39 place settings at the table to her in her work The Dinner Party .