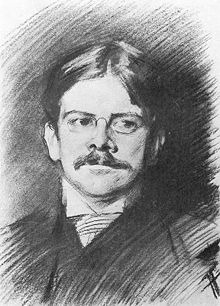 Edwin Austin Abbey RA (born April 1, 1852 in Philadelphia , Pennsylvania , † August 1, 1911 in London ) was an American painter and illustrator . He was known for his drawings and pictures on Shakespearian and Victorian subjects. His most famous work, the wall frieze “The Search for St. Grail ” is on display in the Boston Public Library .

Edwin Austin Abbey began his artistic training with Isaac Williams , a portrait and landscape painter. In 1868 he studied at the Pennsylvania Academy of the Fine Arts , where he was a student of Christian Schussele . In the same year he also started working as an illustrator at Van Ingen & Snyder. At the age of 19 (1871) he went to New York to work for the art department of Harper's Magazine . Here he made the acquaintance of other illustrators, such as Francis Davis Millet , Edwin Blashfield and Alfred Parsons .

In 1876 there was an exhibition of the century in Philadelphia on the occasion of the 100th birthday of the USA. A large selection of European painters could be seen here. Abbey was particularly fond of the English painters ( Leighton , Watts and Boughton). At the age of 26 (1878) Abbey went to England to collect background information on the poems of Robert Herrick for Harper's . In the 1890s he painted murals for the Boston Public Library. On February 12, 1896 he became a member of the Royal Academy of Arts (RA) and in 1898 of the American Academy of Arts and Letters . Undoubtedly, 1902 was a high point for Abbey. For he had been chosen to paint the coronation of Edward VII ; at the same time he was elected a full member ( NA ) of the National Academy of Design in New York that year . In 1903 he received a small gold medal at the Great Berlin Art Exhibition . In 1907 he refused the offer to be knighted; otherwise he would have lost his US citizenship . In 1908/09 Abbey painted several murals for the new Pennsylvania State Capitol in Harrisburg , which were completed by his friend John Singer Sargent after his sudden death.