John Mason (* before December 11, 1586 in King's Lynn ; † 1635 ) was a seafarer and English colonizer in North America. He was the second governor of Cuper's Cove colony in Newfoundland , founder of the New Hampshire colony and one of the leading organizers of the English Army in the Anglo-Spanish War .

John Mason was first mentioned in a document when he was baptized on December 11, 1586 in King's Lynn as the son of John Mason and his wife Isabella (née Steed). He spent his student days at Peterhouse College of Cambridge University and at Magdalen College of Oxford University . After completing his studies in 1602, he probably went to sea in the English navy , he appeared as a trader in London and soon showed an interest in the English expansion into North America. In 1606 he married Anne Green, the daughter of a London goldsmith. In 1610 he was given command of a fleet of four ships by James I , which was used by Bishop Andrew Knox to fight unrest in the Outer Hebrides . At that time, at the age of 24, he was already referred to as the "captain", so he must have climbed quickly and had a special talent for seafaring. He must also have had private funding opportunities as he contributed more than £ 2000 in funds to this expedition. The payment he was promised by the Earl of Dunbar apparently failed to materialize, nothing is known about his years immediately after the expedition. It was not until 1615 that a piracy charge was established in Scotland. A conviction came on August 12, 1615, as a result of which he gave his ship and a large sum of money to the Scottish Treasury .

In 1615 Mason got in touch with Sir William Alexander through whom a new field of activity opened up for him. Possibly as a belated reward for his work in Scotland, he was appointed governor of the Colony Cuper's Cove on Newfoundland in the same year as the successor to John Guy . From the summer of 1616 he lived there, explored and mapped a large part of the island. An apparently dominant theme of his administrative work was a conflict that lasted for many years between the agriculturally oriented settlers of the colony and the fishermen who used the fishing grounds off the island. These came from South West England and only stayed in Newfoundland during the fishing season, but set up small bases and material stores along the coast. Fishermen and settlers had different focuses of use of the resources of Newfoundland, which repeatedly led to conflicts of interest. John Mason left Newfoundland in 1619 to work in England to strengthen the rights of settlers.

When he arrived in England, he published a short paper in Edinburgh in 1620 about his discoveries, in which he realistically depicted the landscape as well as the flora and fauna of Newfoundland. He hoped to win Scots to colonize the island. In the same year he received an order from the Privy Council and a ship to combat piracy in Newfoundland. After 1621 he no longer appears as governor, his post apparently no longer occupied, even if the settlement of Cuper's Cove was still populated during the first half of the 17th century.

The land ownership in New England

In 1621 he returned to England, where he held talks with Sir William Alexander about possible plans to colonize Nova Scotia and got in touch with Sir Ferdinando Gorges , who at that time was responsible for the granting of fishing rights off Newfoundland. Mason and Gorges received a joint deed of ownership from the Plymouth Council for New England in 1622 on all land between the rivers Merrimack and Kennebec , Mason alone received a deed in March 1621 for the land between the river Naumkeag near Salem and the river Merrimack. Probably 1623, David Thomson, commissioned by Mason, founded a settlement at the mouth of the Piscataqua, from which the first permanent development in New Hampshire developed in later years.

Mason and Gorges divided their common property along the Piscataqua River in 1629 so that Mason received the southern part. The part awarded to John Mason was run as the Province of New Hampshire in the future . It comprised almost the entire southeastern part of what is now the US state of New Hampshire and the parts of Massachusetts that are now north of the Merrimack . 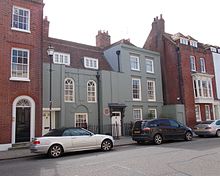 John Mason's home at 11 High Street in Portsmouth in 2015

From 1624 Mason lived with his wife and children, one of whom is known by name, Anne, in Portsmouth in southern England. In the wars of England in the 1620s, Mason was a treasurer and paymaster in the English army from 1625 to 1629. In doing so, he acquired the reputation of an honest, efficient and deliberate officer. It is not entirely clear how he got into this prominent position; he was probably recommended to this by a cousin who was secretary to the Duke of Buckingham . Among other things, he was in 1625 and 1626 head of the supply of the expeditions of the Duke of Buckingham to attack Cádiz and the siege of La Rochelle . Even if both endeavors were military failures, they helped to improve Mason's reputation, for his structured administration, which avoided any appearance of selfish enrichment, was not a matter of course at the time. The efforts connected with the financing and organization of the military operations led to Mason's resignation due to illness in 1627. From the beginning of 1628 he was able to take over the part of the tasks that did not deal with the affairs of the fleet.

In August 1628 the Duke of Buckingham was a guest at Mason's house. During this time clashes occurred between the Duke and angry sections of the local population, who opposed his policies. On August 23, 1628, the Duke was killed in a fatal attack by officer John Felton in Mason's house .

After the end of the war, Mason remained involved in the financing of the army, he worked on the expansion of Portsmouth to become the most important naval port in England and made a particular contribution to the repair of Southsea Castle , of which he was commanded in 1634.

Mason's interests were broader, however, he bought more houses, developed a concept to expand fishing along the English south coast against the competing Dutch and became treasurer of the Society for the Promotion of Fisheries in England, Scotland, founded by the King in 1633 on the basis of this concept and Wales.

After 1629 Mason and Gorges again developed activities in New England. He sent settlers and material to the areas that were allotted to him and invested considerable sums of money there to build up the local infrastructure. He stayed in Portsmouth himself and had Walter Neale represent his interests in America . Mason became a member of the Plymouth Council for New England in June 1632 and its vice-president the following November. Some council meetings were held in Mason's homes. In the years that followed, the council increasingly lost the ability to influence developments on the other side of the Atlantic from England. When the council was dissolved in 1635 and the administered area divided among its members, Mason received confirmation of his previous ownership rights and additional land on the Kennebac River and parts of the Isles of Shoals . He received the title of Vice Admiral of New England, but died that same year after a brief illness while preparing for a trip to the new colony. John Mason was buried in Westminster Abbey .

Mason made the first known English map of the island of Newfoundland. On the map published by William Vaughan in his work Cambrensium Caroleia in 1625 , established place names can be found alongside new creations such as Bristol's Hope and Butter Pots . He himself published the description of his research in Scotland in 1620 under the title A Briefe Discourse of the New-Found-Land with the situation, temperature, and commodities thereof, inciting our nation to go forward in the hopefull plantation begunne .