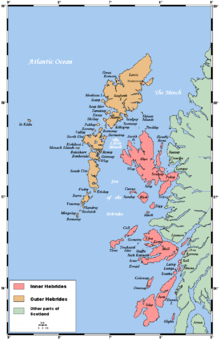 The Hebrides (Outer Hebrides in orange)

The Outer Hebrides ( English Outer Hebrides or Western Isles , Scottish Gaelic Na h-Eileanan Siar [ nə ˈhelanən ˈʃiəɾ ], 'The Western Isles') are an island chain belonging to the Hebrides in the Atlantic Ocean on the west coast of Scotland . They are about 60 kilometers west of the mainland and run in an arc from the Butt of Lewis in the north to Barra Head in the south. The entire chain of islands is 208 kilometers long. The Straits of Little Minch and North Minch separate them from the Inner Hebrides to the southeast .

Under their Scottish Gaelic name Na h-Eileanan Siar , the Outer Hebrides form one of the 32 Council Areas , the local administrative units of Scotland. The capital is Stornoway (Scottish Gaelic Steòrnabhagh ) on the Isle of Lewis .

The Outer Hebrides includes the following inhabited islands (from north to south):

The smaller of the inhabited islands are connected to larger islands via car bridges and road embankments, so that there are three inhabited archipelagos, between which car ferries run several times a day.

The ten largest islands in the Outer Hebrides

The people of the Outer Hebrides live mainly from fishing for fish and crabs and as small tenants and sheep farmers. Tourism also plays a role. The extensive peat bogs of Lewis are mined by islanders for their own fuel needs.

The following ferry lines serve the islands from outside the Outer Hebrides:

There are also small, nationally connected airports on Barra , Benbecula and Lewis . The Barra Airport has a special feature: its flight plans are based on the tides , as the runway is on the beach.

On the northern, evangelical islands, Sunday is observed as a day of rest , which is why public life is largely idle on this day. There were no ferries to and from the islands on this day until 2009. However, this has now changed, even if the new practice is still controversial. About a quarter of the population belongs to the Free Church of Scotland , which strictly observes the Sabbath, refused all music in services until 2010 and has strict dress codes for going to church. The southern islands of the Outer Hebrides are predominantly Catholics .

The Outer Hebrides are the setting for Simon Beckett's novel Kalte Asche , which takes place on the fictional island "Runa". The capital, Stornoway, and many other actual places and islands, such as St. Kilda, also feature in the novel.