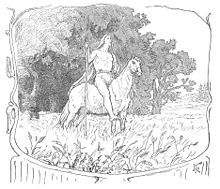 Vidar (also Vidar anord. Vidarr - "the well Ruling", or composed of the anord. Words víðr = forest and arr = warriors; thus "warriors of the forest") is the Norse mythology a God of gods sex of Asen . He is a son of the god Odin and the giantess Grid and is nicknamed Der Schweigsame Ase in poetry . In Ragnarok he is supposed to avenge Odin's death by Fenriswolf and survive the battle as one of the few gods. Vidar is described in the Snorra Edda and the Lieder Edda .

Vidar is always a good support to the sir and the only one who was spared Loki's inflammatory speeches in Aegir's hall . After Thor, Vidar is the strongest Ase. In the end-time battle of Ragnarök , he avenges his father Odin by kicking the Fenriswolf in the throat with a special leather shoe and breaking his mouth in two.

Immediately Widar turns against the wolf and puts his foot in the lower jaw.
On this foot he has the shoe with which one collects through all times,
namely, the leather strips that people cut from their shoes, where the toes and heels sit.
That is why everyone should throw these strips away who is anxious to come to the aid of the sir.
Widar grabs the wolf's upper jaw with his hand and tears its jaws in two and that becomes the wolf's death.

In the Völuspá, however , Vidar kills the wolf by stabbing him in the heart with his sword. Together with Wali, Magni, Modi, Balder and Hödur, he survived the end-time battle of Ragnarök and is supposed to build a new world with them. In the Snorra Edda, Vidar is referred to as the "son of Odin", "the wearer of the iron shoe", "opponent and slayer of the Fenrir wolf", "gods avenging Ase" and "the silent god". Some theories have been put forward that his silence could be an act of vengeance.

His residence is called Landvidi ("wide land") or just Vidi ("wide") and is overgrown by tall grass and bushes.

A possible custom emerges from Snorri's description that in earlier times the leather strips of the shoes were sacrificed to Vidar. An analogy exists in the ship Naglfar, which is also connected to the Ragnarök and made from the nails of the dead. Otherwise nothing is known about Vidar outside the Edda. Due to parallels (especially by name) with St. Vitus , St. Vitus's Day on June 15, which is related to the customs of the summer solstice , is dedicated to him in Germanic neo-paganism .