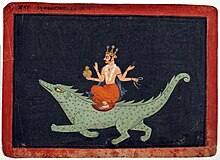 Varuna ( Sanskrit , m., वरुण, Varuṇa "the all-embracing", the "enveloping") is one of the highest and most revered Indian deities of the early Vedic period. With Mitra and Aryaman he forms an early Vedic triad. He is often mentioned and called upon together with his opposite pole and twin brother Mitra. Together both maintain heaven and earth. They encourage the upright and punish the wicked.

The Iranian mythology mentions the two gods same Varuna and Mithra , but take on other functions, the cult of Mithra in the Roman Empire to Mithraism developed.

Varuna is considered the god of the cosmic and moral order ( Rita ); Sacrifice and rituals to him are supposed to ensure the maintenance of the cosmic order. This is a reconstruction of the sacrificial acts performed by the gods, which should be constantly renewed. The kings are considered to be Varuna's earthly representatives. Varuna is also the god of the oath and truth. There is a strange ritual for Varuna in which one sacrifices barley to the god (Varunapraghasa) . The victim's wife has to confess whether she lives with other men besides her husband. The ritual is supposed to bring fertility and rain. Varuna is considered a terrifying, strict, serious, damaging and punishing god who can also get angry. In the hymns of the Rigveda addressed to him , he is often worshiped for mercy and forbearance and asked for forgiveness for sins committed. One tries to appease him. He should refrain from his anger and punishment and deliver from sin. Just worshiping Him makes us righteous and sinless. The God is strict, but always righteous, he forgives sins quickly and is easy to appease. In addition to the perception of moral functions, Varuna is also closely related to water. He lives in the lakes, rivers, seas and springs, and the heavenly ocean. He is also responsible for the rain and can punish sinners with dropsy. In rituals he is often invoked, especially in connection with water. One takes water in the palm of the hand and swears or curses in order to reinforce or reinforce the curse or vow. Varuna is also worshiped as the god of the night and the moon. He is considered the "King of the Nagas " ("Snakes") and, next to Yama , the first person to die, as the "Lord of the Dead". The souls of the drowned people traditionally come to Varuna. He also acts as a funeral judge alongside Yama. The god also watches over the sacred drink soma . He is also often referred to as the creator of the sun, which is often depicted as his eye.

In later times he takes a back seat to the warlike Indra , who takes on many of the classic tasks of the Varuna and seems to have ousted him. In relation to him, Varuna is a static, passive god, while Indra is an active and dynamic deity. While Indra actively defends the Rita in the fight against the Asuras, Varuna acts more as the omniscient Preserver of the world, vigilant guardian and guardian of Rita. He himself does not stand out for his deeds and mythological events, like Indra, but for the great, even character of his existence and work. In a way, Varuna is more powerful than Indra because he still lives far above his heavenly home town of Svarga . Since he lives further away from the earth, he also has less influence and direct contact with people. In contrast to Indra and Agni , he belongs to the older class of gods of the Asuras , who have Maya , while Indra and Agni are counted among the Devas . In relation to them, the god also has a few dark, terrifying, and malicious traits. God has a double, contradicting nature. Varuna is considered the highest Asura in the old meaning of the word.

The Atharvaveda describes that Varuna, in contrast to his twin brother Mitra, is entitled to black grain and the black ram offerings, while Mitra receives the white.

Varuna is married to Varuni , the goddess of wine, who appears during the whirling of the cosmic ocean of milk and is attributed to the "demons". He lives in a pure white castle in heaven. The nights are his beloved, whom God holds in his embrace.

Varuna (“the enveloper”) is originally the personification of the all-encompassing heaven and the highest of the seven Adityas and thus, like his brother Mitra, son of the goddess Aditi . The songs to him belong to the most exalted parts of the Veda and portray him as the all-wise creator, sustainer and ruler of the world, the all-knowing, omnipresent and omnipotent protector of the good and avenger of evil, holy and just, yet full of mercy. He creates heaven and earth and determines the outermost limits, such as the horizon. He is u. a. responsible for the fact that the sun moves across the sky, that day and night and the seasons follow one another. Varuna is not to be fooled. His servants and spies are the stars who watch over the earth and people for him. Like him, they know all the deeds and sins of men, as well as their hidden secrets. Varuna knows both the past and the future. With his noose he catches sinners and those who break their word, but like his mother Aditi, he can also free them and untie them again. Varuna is considered a king, a king over nature, gods and humans.

Varuna is always depicted with the attributes of a parasol, with which he protects the righteous, and a noose, with which he binds the insubordinate. He rides on a Makara, a mythical creature made of crocodile, elephant, fish and turtle, from whose mouth all plant and animal life emerges. Its body color is usually white or blue. The moon and the sun or the stars are often seen as his eyes. The wind is his breath. Varuna is an Indian name for the planet Neptune.

In the later Brahmanic period he becomes one of the eight Lokapalas (“world guardians”) and from then on protects the western direction from negative influences. In today's Hindu religious philosophies, Varuna does not play a role in the life of faith, or it plays a very subordinate role. With followers of the Brahmanistic philosophies of religion (such as the Saraswat Brahmins from Haryana or the Nambuthiris from Kerala ) he is sometimes worshiped as a family deity (Kuldevta) . In addition, he is still considered to be the god of water and rain. In this capacity, the god is also mentioned in the Hindu epic Mahabharata when Rama asks the ocean (personified as Varuna) to let him pass to Lanka . The term Rita is no longer used in the texts today and has been superseded and replaced by the term Dharma .