Raw blocks of Baumberger sandstone in the quarry in Havixbeck. 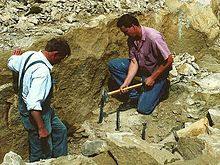 Quarrying Baumberger sandstone in the quarry in Billerbeck

Aerial view of the quarry in Havixbeck

St. Paulus Cathedral in Munster made of Baumberger sandstone 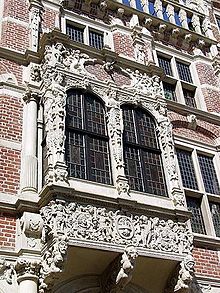 The Baumberger sand-lime brick or Baumberger sandstone is a marly limestone of the Münsterland Baumberge . Its designation as "sand" - or "sand-lime brick" goes back to the relatively high content of quartz sand grains for limestone . It was deposited in the late Upper Cretaceous ( Campan ) in the Münsterland chalk basin, which was then covered by the sea. It has been mined near the towns of Havixbeck , Billerbeck and Nottuln for around 1000 years .

The Baumberger sand-lime brick is the highest layer member of the lower part of the Baumberg Formation (formerly Baumberger layers ) of the higher Upper Cretaceous (Campanian) of the Münsterland Chalk Basin. This is one of the youngest sedimentary rocks in this basin. It is underlain by the so-called lying marls of the lower Baumberge formation and overlaid by the flame marl of the upper Baumberge formation.

The Baumberger sandstone is gray, weathered yellowish-brownish color. It consists of a maximum of 70 percent calcium carbonate , 16 percent quartz , 3 percent feldspar , a small amount of rock fragments and up to 11 percent glauconite . The most common grain size is 0.1 millimeters.

With Baumberger sandstone, three different stone horizons (Paol, Lappen and Fließ) are distinguished, with the top and bottom horizons being the hardest. Due to the high lime content and the high pressure above it, the bottom layer is very hard and is therefore mainly used for outside areas. In contrast to the other two layers, this layer can have a light to dark gray color in addition to the characteristic yellowish color. There are currently three quarries still in operation for stone extraction.

Compared with natural stone from other areas and stratigraphic levels, which are similar to petrography, the Baumberger sandstone is rather soft and is considered to be very susceptible to weathering . However, this reputation should rather be based on the use of unsuitable material from the “ Coesfeld layers” or the processing of the material that is not suitable for storage.

The second point in particular has seriously damaged the reputation and use of Baumberger sandstone. Experience has shown time and again that the stone should be processed in the same position as it was taken from the quarry . If this does not happen, the workpieces stand on a gap , in a sense upside down. Such workpieces, such as the figurative jewelry on Billerbeck Cathedral , had to be replaced after 100 years because they were completely weathered. Today, when ordering Baumberger sand-lime bricks, the intended use and installation position must therefore be specified so that the suitable material can be selected for the respective purpose.

This natural stone is used for solid buildings, paving stones and curbs, stairs, window sills and floor slabs outside. In the Middle Ages it was used all over northern Germany and the Netherlands . The Baumberger sandstone was installed at the Bocholter and Münster town hall as well as the Cologne , Münster and Osnabrück cathedral and used for gravestones in the central cemetery in Münster. It is suitable both for the production of building sculpture and ornaments as well as for the production of modern sculptures by stone sculptors .

The Baumberger Sandstone Museum in Havixbeck provides information about the origin of this natural stone, the history of the handicrafts of stone breakers, stone carvers , stonemasons and sculptors in the tree mountains as well as the distribution and use of the material in the past and present. The Baumberger sand-lime brick is best suited for indoor use.

The Baumberger sandstone is one of the find layers of the Cretaceous real bony fish Sphenocephalus .