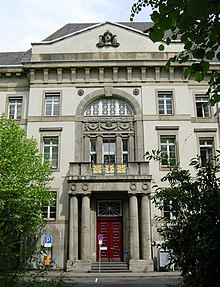 The Krefeld Regional Court belongs to the ordinary jurisdiction of the German state of North Rhine-Westphalia and is one of six regional courts in the Düsseldorf Higher Regional Court district .

The regional court (LG) has its seat in Krefeld . The judicial district includes the cities of Krefeld, Kempen , Willich , Tönisvorst and Nettetal as well as the communities of Brüggen and Grefrath .

As early as the French era (1794–1815), Krefeld was the seat of a higher court, which for the times served as a regional court. With the reorganization of the judicial authorities in the Rhine Province, Krefeld lost the regional court with effect from July 20, 1820 and was added to the Düsseldorf regional court district. With the increasing importance of the city in the 19th century, the desire to get the district court back also grew. This request was only granted in 1906, even if there was a criminal chamber and a public prosecutor's office in Krefeld by 1893 at the latest . At the same time, the Düsseldorf Higher Regional Court was formed from parts of the Cologne and Hamm judicial districts . Until then, Krefeld had belonged to the Cologne Higher Regional Court. Initially, the district court resided in the premises of the district court on Steinstrasse. Only with the completion of the new court building was the regional court able to move into its own premises on the north wall from December 18, 1919. The city has bought the land required for the new building from its owners and made it available free of charge.