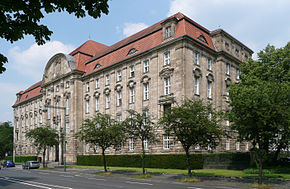 The Düsseldorf Higher Regional Court is the youngest of the three higher regional courts (OLG) in the state of North Rhine-Westphalia .

The seat of the court is the state capital Düsseldorf . More than 4.6 million people live in the approx. 5000 km² judicial district . Six regional courts belong to the district .

At the Higher Regional Court are 12,495 lawyers and general counsel attorneys admitted (as at 1st January 2018).

Main building and former residence of the court presidents 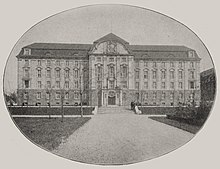 Staircase hall in the main building, 1910

Former residence of the presidents of the Düsseldorf Higher Regional Court, Cecilienallee 4, since 2008 the seat of Berenberg Bank, Düsseldorf branch

In 1906, the court found temporary accommodation at Königsplatz 15/16 in the city ​​center and, from 1907, also at Königsplatz 26 and in the Rothes Haus at Josephinenstraße 9. Based on a contract that the then Mayor of Düsseldorf Wilhelm Marx had already concluded in 1903 with the district court president Ratjen as a representative of the Prussian treasury , the neo-baroque building of the Düsseldorf Higher Regional Court, the main building at Cecilienallee 3, which is now a listed building , was designed by Paul Thoemer in 1910 and changes made by Heinrich Quast on what was then known as the Golzheimer Aue in Düsseldorf-Pempelfort . The Düsseldorf sculptor August Bauer , who together with Johannes Röttger had created the Bismarck monument in Düsseldorf, was commissioned to model all the facade ornaments .

A building site was deliberately chosen for the project that was next to the government building that was planned at the same time , which is also the neo-baroque main building of today's district government of Düsseldorf , on the Rhine and thus could form an important part of a representative, metropolitan Rhine bank development. The settlement of Prussian courts and authorities in Düsseldorf was also embedded in an overall urban planning concept that provided for the construction of important new streets, squares and green areas for the Pempelfort and Golzheim districts . Starting in 1906, for example, the Kaiser Wilhelm Park, today's Rheinpark Golzheim , was laid out on the opposite side of the street from the Higher Regional Court . Within the exhibition GeSoLei this was structural policy established urban development approach pursued until the 1920s by the city of Dusseldorf.

A small palace as the official residence of the court presidents should complement the courthouse. This residential building was built in the same style and material at Cecilienallee 4 in such a way that, together with the courthouse, it forms an urban portal for the beginning of Klever Strasse on the banks of the Rhine. In the 1950s it was rebuilt for the administration of justice. A bank has been located in the palace since 2008.

The main building of the Higher Regional Court survived the Second World War and a threat from structural interventions in the post-war period largely unscathed. The original condition has been largely restored through restorations in recent years, despite a thorough renovation .

The rich and meaningful interior of the building is particularly worth seeing, such as the large cycle of mural paintings in the plenary hall of the Higher Regional Court, created by Professor Willy Spatz , with the historicizing depiction of scenes from German legal history, or in the window frame above the portal the head of Medusa , the person entering admonishing the judicial function of deterrence .

Office building at the back 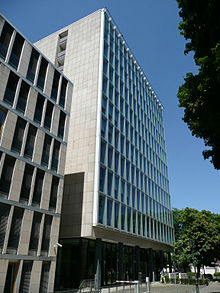 At the back of the historic courthouse, space was left from the outset for a later extension of the Higher Regional Court. This option was used in 1957 to build a modern ten-story high-rise office building based on a design by the Düsseldorf State Building Authority. It was connected to the main building via a bridge-like corridor made of steel and glass. Due to its location on Klever Strasse, the office high-rise forms a focal point that can be seen from afar, particularly to the east. Shortly after the turn of the last century, the high-rise office building underwent a new facade design and a few years later additional office buildings were added. For urban planning and monument protection reasons, the latter are subordinate to the main building and the neighboring building of the district government in that they only reach up to the eaves of these buildings and are clad with light natural stone slabs.

About five kilometers from the main building, the Higher Regional Court maintains a high-security courtroom for processes that require high security precautions. The building at Kapellweg 36 in Düsseldorf-Hamm is on a site next to the State Criminal Police Office of North Rhine-Westphalia . The planning for the construction began in 2002. There was no model in Germany for the planning, as the high-security courtroom in Stuttgart-Stammheim from the 1970s was viewed as unsuitable.

In the center of the building is the 560 m² courtroom. It can accommodate a maximum of 15 defendants, 60 defense lawyers, 145 spectators and 30 security officers. Space for simultaneous interpreters is also provided. There is also a smaller, 240 m² courtroom for trials against up to six defendants. Both halls have daylight windows. A helipad has been set up on the roof of the building.

Since it opened on January 14, 2004, the building has also been available to other courts and is therefore also known as the “high security wing of the NRW justice system”. The construction costs amounted to 35 million euros. Among other things, a negotiation took place there during the Mannesmann trial , as the hall also offers the possibility of video interrogation. Other cases dealt with terrorism and serious crime. The Kleve District Court moved a blood revenge trial to the building after one of the defendants was shot in the courtyard of the Kleve Court.

The Düsseldorf Higher Regional Court plays a central role for information technology in the North Rhine-Westphalian judiciary: both the central help desk , the so-called BIT (information technology advice telephone), and the one for network and system management , organization of IT operations, central line management and IT Security (including virus protection) responsible TBZ (Technical Operations Center) have been here since 2000 resp. Settled in 2002. Since the beginning of 2016, however, these two institutions have no longer been under the responsibility of the President of the Düsseldorf Higher Regional Court, but rather the Central IT Service Provider of Justice (ITD) to the President of the Cologne Higher Regional Court.

The OLG is known for the Düsseldorf table on child maintenance it published and the chambers of competition law.

Werner Richter has been President of the Düsseldorf Higher Regional Court since October 12, 2018.

Subordinate are the regional courts of Düsseldorf , Duisburg , Kleve , Krefeld , Mönchengladbach and Wuppertal with the local courts subordinate to these courts .

Higher regional courts in the state of North Rhine-Westphalia