Ständehaus, seat of the OLG Dresden

The Dresden Higher Regional Court is the highest court in Saxony's ordinary jurisdiction . It was re-established by the Free State of Saxony on January 1, 1993 and was initially located in the courthouse on Sachsenplatz ; since 2001 it has been located in the Saxon State House in Dresden's historic old town .

The Higher Regional Court (OLG) has its seat in Dresden , its judicial district corresponds to the Free State of Saxony.

At the Higher Regional Court are 4,656 lawyers and general counsel attorneys admitted (as at 1st January 2018).

In 1952 the higher regional courts in the area of ​​the GDR were abolished and the jurisdiction was reorganized through the establishment of district and district courts . After reunification, the Dresden Higher Regional Court was re-established in 1993. Until the building was destroyed in 1945, the Higher Regional Court was housed together with the civil chambers of the Regional Court in the courthouse on Pillnitzer Strasse, which was built between 1876 and 1878 .

For the trial against the Freital Group , a branch office with a high-security courtroom was temporarily set up on Hammerweg in Dresden's Albertstadt district in 2017 . 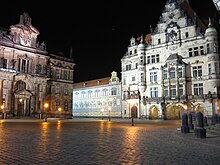 The courthouse (left) seen from Schloßplatz; on the right the Georgentor

The Ständehaus was built between 1901 and 1906 by the architect Paul Wallot , who also designed the Reichstag building, on the site of the Brühl Palace . From 1907 to 1934 it was the seat of the Saxon state parliament. In 1945 it burned out after a bombing raid , and in 1946 a simplified reconstruction took place. Between 1996 and 2001 the building was extensively renovated. Until 1999 the Museum für Tierkunde Dresden , the Museum für Mineralogie und Geologie Dresden , the Deutsche Fotothek and the seat of the State Office for the Preservation of Monuments were housed in it. The OLG Dresden has been housed in the Ständehaus since 2001. The President of the Higher Regional Court acts as host in this building, in which, in addition to the OLG, the State Office for the Preservation of Monuments of Saxony has its seat and the Saxon State Parliament maintains rooms.

The Federal Court of Justice is the only superordinate court of the Dresden Higher Regional Court. The 5th Criminal Senate of the Federal Court of Justice with its seat in Leipzig is responsible for revisions in criminal law from the district of the OLG Dresden . Subordinate are the five Saxon regional courts of Chemnitz , Dresden , Görlitz , Leipzig and Zwickau with their respective subordinate local courts .

Entrance area, above the rooms of the state parliament president