The higher regional court Frankfurt am Main , abbreviated OLG Frankfurt , is the highest court of the Hessian ordinary jurisdiction .

The Frankfurt Higher Regional Court is also the intermediate authority of the state administration and is responsible for more than 1200 judges, over 3000 civil servants and around 2800 employees who work in the entire Hessian judiciary.

The higher regional court has its seat in Frankfurt am Main . Branch offices are located in Darmstadt and Kassel . The judicial district includes the federal state of Hesse .

At the Higher Regional Court are 21,270 lawyers and general counsel attorneys admitted (as at 1st January 2018).

Frankfurt am Main has a long tradition as a place of jurisdiction. At the time of the first documentary mention in 794, the Franconian kings maintained a courtyard ("villa") here in the center of a fiscal district . At the beginning of the 9th century, the Königspfalz Frankfurt ("palatium") was established, which was the headquarters of the East Franconian Empire for a time. The Staufer left from the mid-12th century, the castle-like Saalhof ( "the riches sal") building, where they either themselves sat in judgment or case law their taskmasters leaving ( "advocati"). From 1189 a Reichsschultheiß ("sculterus imperii") is proven, which was the presidency of the royal court and which had its official seat in the Saalhof. The Frankfurt court was often called upon as Oberhof by the surrounding courts. The oldest documented decision of the Frankfurt Oberhof dates back to 1225.

Towards the end of the Middle Ages the importance of the Oberhof declined. The individual sovereigns transferred the jurisdiction to the courts located in their territories, so that the jurisdiction of the Frankfurt courts was limited to the area of ​​the free imperial city, but retained supra-regional importance as a fair jurisdiction.

In 1509 the municipal syndicus Adam Schönwetter von Heimbach first systematically recorded Frankfurt city law in the Frankfurt Reformation . After its expansion and revision in 1578 by Johann Fichard , it remained valid until the end of the Holy Roman Empire in 1806, partly as a particular law until 1900. The highest court in the imperial city of Frankfurt was the lay judge made up of members of the city council. The Free City of Frankfurt was in 1816 with its constitution, the constitution supplement Act , a new court order. The appellate and criminal court with its six appellate judges was elected by the jury and senator banks in the Senate of the Free City of Frankfurt . The highest judicial college was the higher appeal court in Lübeck .

Even after the annexation of Frankfurt by Prussia in 1866, the organization of the courts in Frankfurt was essentially retained until the Courts Constitution Act 1879 came into force . The Prussian Higher Tribunal only acted as the highest instance instead of the Higher Appeal Court.

The Frankfurt Higher Regional Court was responsible for the district courts of Frankfurt, Wiesbaden, Limburg, Hechingen and Neuwied with a total of 52 local courts. It was initially housed in the "King of England" house in Fahrgasse , moved to the newly built Palace of Justice in 1889 and then to Court Building B in 1917.

When the National Socialists came to power in 1933, the management of the court was also replaced on the basis of the law to restore the professional civil service and personnel changes were ordered. Chief President Bernhard Hempen was forcibly transferred, and NSDAP member Otto Stadelmann was his successor. The non-Aryan higher regional judges Wilhelm Alexander Dreyer (1882–1938) and Karl Weigert (1884–1942) were retired on December 31, 1935. A further 34 judges were removed from service throughout the Higher Regional Court district.

On March 31, 1933 opened Roland Freisler which, based in the same building Frankfurter special court ,, the March 1945 to nearly 1,700 political cases against 2,204 people, so-called " enemies of the people " carried out. Those sentenced to death were executed in the Preungesheim prison.

With the Third Act on the transfer of the administration of justice to the Reich of January 24, 1935, the Frankfurt Higher Regional Court was also transferred to the Reich Ministry of Justice with effect from April 1, 1935 , and the Prussian Higher Regional Court became a Reich Court and thus a branch of the Reich administration dependent on instructions. With the 5th ordinance on the Reich Citizenship Law in 1938, all Jewish lawyers in the judicial district lost their license, including numerous well-known lawyers.

With the beginning of the Second World War in 1939, the work of the court continued unchanged under the new President Arthur Ungewitter , NSDAP member like Stadelmann. In 1943 and 1944, parts of the courthouse were lost in American and British bombing raids, and many case files were destroyed.

American troops occupied Frankfurt on March 29, 1945. Judicial activity in Hesse was discontinued with the Control Council Act No. 2 by the Allied military government, the Higher Regional Court was closed and dissolved on the same day.

An ordinance of the Greater Hessian State Ministry of May 23, 1946 established the Higher Regional Court of Frankfurt am Main, which was responsible for the entire area of ​​Greater Hesse and thus the later new federal state of Hesse ; this included the district courts of Darmstadt, Frankfurt, Fulda, Gießen, Hanau, Kassel, Limburg, Marburg and Wiesbaden with a total of 58 district courts. The new higher regional court did not succeed the previous court, as the new state of Hesse was not a legal successor to the German Empire.

The external senate that still exists in these cities is a reminder of the tradition of the formerly independent higher regional courts of Kassel and Darmstadt. The Kassel Higher Appeal Court, the predecessor of the Kassel Higher Regional Court, became known through the Constitutional Conflict of Hesse in 1850, which led to federal intervention and heightened awareness of judicial independence in Germany.

When the Higher Regional Court of Frankfurt am Main was founded in 1878, it had twelve judges' positions (two civil senates, one criminal senate), there are currently 140 judges in 50 senates, 20 of which are in Darmstadt and 17 in Kassel. A total of around 550 employees work at the Higher Regional Court today. In terms of the number of judicial posts, it is the fourth largest higher regional court in Germany after the higher regional courts in Hamm , Munich and Düsseldorf .

"King of England", the first seat of the Higher Regional Court

The city of Frankfurt had promised the state of Prussia by a city council resolution of May 26, 1877, in the event that Frankfurt became the seat of the Higher Regional Court, to pay the costs of the temporary accommodation for the first five years. In a letter of June 25, 1877, the President of the Court of Appeal, Vierhaus, named the space requirements on behalf of the Prussian government: two conference rooms with adjoining consultation rooms, three presidential rooms, three rooms for the secretaries, three chancellery rooms as well as rooms for the registry, library, lawyer's room, public prosecutor's room and messenger room. The higher regional judges themselves worked at home and did not need any rooms.

In a letter dated November 1, 1878, the city of Frankfurt offered the "King of England" house at 94 Fahrgasse as the provisional seat. The building is representative enough that it served as quarters for foreign envoys during the coronation of emperors. The house was rebuilt for 9,930.04 marks and handed over on September 15, 1879.

After the Higher Regional Court moved out on July 1, 1889, the house was demolished in January 1891.

The Palace of Justice

The “King of England” was intended as a temporary measure from the start. In the period that followed, town and country conducted lengthy negotiations about a final solution. The negotiations were difficult because, in addition to the buildings for the three Frankfurt courts, they also included a new police building and a new courthouse. On June 26, 1882, a contract was signed between the state and the city, which provided that a common building for all three courts should be built on the Klapperfeld. The previous central fire station that was located there was previously relocated to the Karmeliter barracks .

Under the direction of building officer Wagner and the government building officer Bohnstedt responsible for the construction, a representative building was built for the pure construction costs of 1,720,000 marks, which quickly became popularly known as the Palace of Justice. 167 rooms on three floors and storage space in the basement were available, 24 of which the Higher Regional Court used. The built-up area was 4213 m². The front lengths were 90.02 meters in Heiligkreuzgasse, 64.71 meters in Porzellanhofstrasse, 95.47 meters in Rechtsstrasse and 50.26 meters in Klapperfeldstrasse. To make better use of the area, a connecting wing was built that divides the inner courtyard into two courtyards. The handover took place on May 16, 1889. 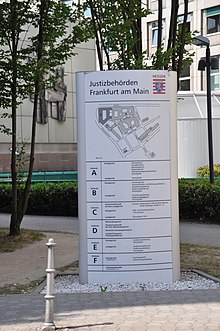 Although the Palace of Justice had meant a significant increase in area compared to the previous buildings, it quickly became too small due to the growth of the city and the courts. The public prosecutor's office of the regional court was relocated to the rooms of the Klingerschule in the Seilergasse, parts of the district court to the old police headquarters on the Zeil.

In 1913, construction began on a second courthouse, which the Higher Regional Court moved into after completion in 1917. The new building, courthouse B, was built next to the old building on the site of the Klingerschule and offered another 300 office rooms.

The courthouses were badly damaged during World War II . In 1953/54, the damage to building B was essentially repaired.

The current building on the Zeil

Even after 1945, the space required by the courts increased significantly. Several attempts to relocate the Higher Regional Court failed (the idea was to build a justice center on Adickesallee, a new building on Schaumainkai, a 37-storey high-rise where Building C is today, and a new building at Vilbeler Strasse / Alte Gasse).

The Hertie goods and department store GmbH moved its headquarters in 1959 to Frankfurt and bought this, the Land Zeil 32 to 42. Zeil 42 the police headquarters had originally been, later used by the administration of justice. The building was completely destroyed in the Second World War. From November 1959 to April 1961, Hertie built its headquarters there, but by 1967 it was too small. Hertie moved the headquarters to Niederrad , and the State of Hesse acquired the Zeil 42 building with 4,474 m² for 29 million DM and converted it into a courthouse (Building D) by the summer of 1971.

During the renovation from 1999 to 2002, the court was relocated to the former main administration of the Federal Railway in the Friedrich-Ebert-Anlage. The move back took place in early June 2002.

There are a total of 47 senates at the Frankfurt Higher Regional Court:

In addition, the Hessian service court for judges has been established at the Frankfurt Higher Regional Court .

In Darmstadt, the external civil senate and the family senate are located in the building built in 2009 at Mathildenplatz 14. This building is used by the judiciary together with the 1st police station.

In 1946, the Darmstadt Senate was initially given rooms in the Darmstadt District Court building at Mathildenplatz 12. In October 1952, the Senate moved to the District Court building at Mathildenplatz 13, which had been badly damaged and restored during the war. In February 1964 the Senate moved again, this time to the Mathildenplatz 14 building. In August 1964 a second Darmstadt Senate was established. In order to create the additional space, the public prosecutor's office moved into the house at Schottener Weg 3 in July 1973 and the second senate used the former offices of the public prosecutor's office.

In Kassel , the external civil and family senates are located in the Frankfurter Straße 7 building.

Only the Federal Court of Justice in Karlsruhe is superior to the Frankfurt Higher Regional Court. Are subordinate to the Hessian district courts in Darmstadt , Frankfurt , Fulda , Giessen , Hanau , Kassel , Limburg , Marburg and Wiesbaden as well as those courts subordinate district courts .