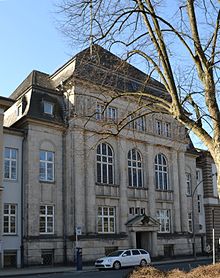 Seat of the Detmold Regional Court, formerly the seat of the Lippe Parliament

The seat of the court is Detmold in North Rhine-Westphalia . The judicial district includes the areas of civil, commercial and criminal matters the circular lip which is essentially the former principality Lippe equivalent and later Free State of Lippe, and is the smallest in the Higher Regional Court of Hamm. In building land matters (Section 220 of the Building Code), however, the Detmold Regional Court is responsible for the Detmold administrative district.

Since 1857, due to the state treaty between the Principality of Lippe and the Kingdom of Hanover, the Hanover Higher Appeal Court of Celle was also responsible for appeals against decisions of the Lippe Higher Courts. When Hanover was annexed by Prussia in 1866 , nothing changed. The new Prussian-Lippe State Treaty of January 4, 1879 was necessary because of the new, uniform court system in the empire, according to which the main part of the Principality of Lippe remained under the jurisdiction of the current Higher Regional Court of Celle as the district of the Detmold Regional Court . Lippe and the Detmold regional court remained under the jurisdiction of the Celle Higher Court until it was reclassified to the Hamm Higher Regional Court from October 1, 1944, i.e. towards the end of the Second World War. Although this change was reversed on April 1, 1946, it was then agreed, due to the unification of the state of Lippe with the state of North Rhine-Westphalia, that the Detmold district court was again reclassified to the district of the Hamm Higher Regional Court.

The Lippian exclaves Lipperode and Cappel near Lippstadt were an exception . As early as 1879, on the basis of the above-mentioned State Treaty of January 4, 1879, these were transferred to the jurisdiction of the Lippstadt District Court and have therefore always belonged to the district of the Hamm Higher Regional Court.

The court is mainly housed in the late classicist building at Paulinenstrasse 46, since 1879/80, when a regional court was established in Lippe. The building was built by the state master builder B. Hermann. Today the neighboring building of the former Lippe state parliament , which is located on Heinrich-Drake-Straße, is also used, which was based there until 1947. In the adjoining building, which was built in 1884/85, the Lippische Spar- und Kreditskasse had its seat. This building is now used by the Detmold public prosecutor. In the directly adjacent part of this building complex on Kaiser-Wilhelm- Platz, the Lippe government was once housed and is now the seat of the Detmold District Court . The building complex was completed in 1911 under the reign of Leopold IV .