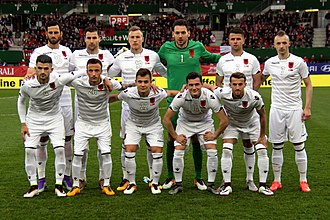 The Albanian national soccer team at the international match against Austria in Vienna on March 27, 2016

The Albanian national football team ( Albanian  Kombëtarja ) is the selection team of the Federata Shqiptare e Futbollit , the Football Association of Albania . It has been internationally active since 1930 . In qualifying for the European Championship 2016 , Albania qualified for a European Championship for the first time . The team has not yet been able to qualify for a World Cup finals. In 1946, Albania celebrated its only title win at the Balkan Cup .

The team is currently 65th in the official FIFA world rankings (October 2019). In August 2015, Albania achieved its best ranking to date with 22nd place, which was due to the 2-1 victory in the European Championship qualifier against Armenia , the subsequent 1-0 win in a friendly against France and the rating of the game against Serbia that was canceled .

Qualifying for the 1966 World Cup was the first qualifying round Albania took part in. The team failed but on Switzerland, Northern Ireland and the Netherlands. The only point in the group was a 1-1 home draw with Northern Ireland.

In 1970, Albania's participation was not accepted by FIFA. Since 1974 Albania has participated in all World Cup qualifications apart from the 1978 tournament.

Qualification for the 1974 World Cup was also not more successful for Albania; the only success was a 1-0 home win over Finland. Albania only achieved a respectable success in December 1984, when they defeated future World Cup participants Belgium 2-0 in World Cup qualification. They also drew 1-1 at home with Poland.

Albania was able to assert itself in the table for the first time in qualifying for the 2006 World Cup , when they reached fifth place out of 7 teams with 13 points in 12 games. In the case of winning points against Denmark and Turkey, around 20 points would have been enough to reach relegation place 2 in the group. The Albanians scored a valuable victory at the beginning of the qualification on September 4, 2004 with a 2-1 victory over the then European champions Greece: The Albanian national team had taken the lead 2-0 after just ten minutes.

In qualifying for the 2014 World Cup in a group with Iceland , Norway , Switzerland , Slovenia and Cyprus , Albania got off to a good start and was in second place in the table, but only got one point in the last four games. Also in qualifying for the 2018 World Cup in a very difficult group with Spain , Italy , Israel , Macedonia and Liechtenstein , the start was successful: after two rounds Albania was group first. The first game against Macedonia in Shkodra at the beginning of September 2016 had to be canceled due to heavy rain. The remaining 14 minutes were made up the next day, and the Albanians scored the winning goal.

Kuq e zi - the followers of the black and red

The first participation in a major tournament was the qualification for the European Championship in 1964 . Albania were awarded progress in the qualifying round as Greece refused to play the game. In the following round of 16, Albania failed 1-0 and 0-4 to Denmark .

In the qualifying round for the European Championship in 1968 , Albania met Yugoslavia and Germany , with the first three games all being clearly lost and a point win only in the last game. The 0-0 in Tirana in December 1967, from a German point of view the disgrace of Tirana , ultimately prevented Germany from qualifying for the European Championship in 1968 , because Yugoslavia had got along better in the neighboring Balkan country and had won.

In qualifying for the European Championship in 1972 they played against Germany, Poland and Turkey, with the 1-1 win against Poland and the 3-0 win against Turkey at least twice. Nevertheless, Albania ended up in the last place in the group.

In qualifying for the Euro 2016 , qualification for a final tournament was achieved for the first time. Albania faced Portugal , Denmark , Serbia and Armenia . In addition, EM host France was assigned to the group, but only competed in friendly matches against the group opponents. The game against Serbia on October 14, 2014 in Belgrade made headlines around the world as it had to be canceled after a drone with a Greater Albanian flag appeared over the field (Albanian fans were not allowed to play). As a result, Albanian and Serbian players fought over the flag, fans stormed the field and beat Albanian players, who then fled into the dressing room in the hail of objects thrown on the field and refused to resume the game. For this reason, UEFA decided to attribute a forfait win to Serbia, deducting three points and fines on both associations. On July 10, 2015, the judgment of UEFA was revised by the international sports court CAS and Albania was awarded the Forfait victory, as UEFA could not prove that the Albanian players had been clearly requested by the referee to restart the game. All other judgments on this game have been upheld by the International Sports Court. In the further course of the qualification the Albanians secured second place in Group I and thus booked the ticket for the Euro 2016. In France they finished third in Group A and were eliminated after three preliminary round games with one win and two losses.

At the Balkan Cup Albania took only 1946, 1947 and 1948 in part. The very inexperienced team won the tournament the first time it participated - one of the Albanian team's greatest successes to date. In the following events, Albania took fifth place twice, which was the last in 1947 and the third from last in 1948.

The following players are currently in the squad. (As of August 2020 )

→ Main article : List of the international matches of the Albanian national football team

So far, the two countries have only met in European and World Cup qualifiers. Albania has not yet been able to win an international match against Germany; the only draw is responsible for the only non-qualification in Germany for a major tournament and therefore went down in football history as a disgrace for Tirana .

It is noteworthy that between 1983 and 2001 the German national team was able to win all games played during this period by only one goal difference. Due to unrest in Albania , the international match was moved from Tirana to Granada in Spain in 1997.

The Albanian Football Association was punished for the use of an ineligible player in the friendly match between Luxembourg and Albania on March 29, 2016. The game was rated with a forfait defeat - with a result of 3-0 for Luxembourg - and the Albanian Association fined CHF 7,500. The reason was Ergys Kaçe , who had not served the automatic suspension for a game after two yellow cards in the previous friendly between Austria and Albania on March 26, 2016.