The club's home ground is the Gewiss Stadium . The stadium has belonged to the club since May 2017 and is currently being modernized. 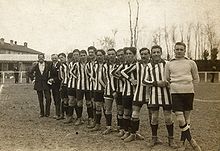 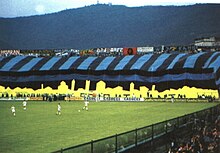 Although Atalanta Bergamo has mostly belonged to Serie A , Italy's highest football league, in the history of the club, the club has not enjoyed great success to this day. The team from Lombardy has not been the Italian national champion once and therefore counts the year 2019, in which they finished third in Serie A, the most successful championship year. The only club success is winning the Italian Cup in 1963 (3-1 against AC Turin ), which they repeated in 1987 (against SSC Napoli ), 1996 (against AC Florence ) and 2019 (against Lazio Rome ) just missed when they lost three times in the final.

The greatest international success is reaching the semi-finals in the European Cup Winners' Cup , for which Atalanta was admitted in 1987/88 despite the final defeat against Naples, because that started as a champion in the European Cup . After victories over Merthyr Tydfil FC , OFI Crete and Sporting Lisbon , Atalanta, which had meanwhile been relegated to Serie B (second division), only failed in the semifinals against eventual winners KV Mechelen . The club set a record: As a second division club, only Cardiff City ( 1967 ) had made it that far in the European Cup.

In the 2005/06 season Atalanta was with 81 points Serie B champions and rose again to Serie A. The recent relegation as 18th in the 2009/2010 season was followed by an immediate return to the elite class in 2011 . Back in Serie A , Atalanta was penalized with a six-point deduction as players Cristiano Doni and Thomas Manfredini were suspected of being involved in a betting and manipulation scandal. Former team captain Doni has confessed to manipulating two Serie B games to secure promotion; The club did not know anything about it. Manfredini, however, was acquitted of the allegations. For Atalanta Bergamo itself, the 2011/12 season was quite satisfactory as the season ended in 12th place in the table despite the point deduction. In the following years, too, placements jumped out in the midfield of the first Italian football league.

The season 2016/17 closed Atalanta Bergamo in fourth place, and thus secured the possibility of qualifying for the UEFA Europa League 2017/18 . After finishing third in Serie A 2018/19 , the club will take part in the UEFA Champions League for the first time in the 2019/20 season. The home games have to take place because of the renovation of the stadium in the Giuseppe Meazza stadium in Milan .

The Stadio Atleti Azzurri d'Italia, now known as Gewiss Stadium , was built between 1927 and 1928.

Over the years the stadium has been rebuilt and modernized again and again. In May 2017, Atalanta Bergamo acquired the facility from the city for EUR 8.6 million. In the purchase agreement, the club undertook to completely renovate the stadium within six years, taking the historic parts of the building into consideration.

The venue is currently being modernized for around 40 million euros and will offer space for around 23,000 spectators after the renovation.

Since Atalanta was able to qualify for the 2019/20 UEFA Champions League , the Champions League home games are currently being played in the Giuseppe Meazza Stadium in Milan , 60 km away due to the renovation work . 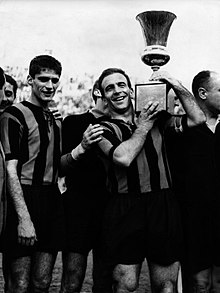 Youth work is highly regarded in Italy as in Europe in general. One of the cornerstones for this was the measure taken by then President Antonio Percassi in the early 1990s to increasingly focus future investments on the next generation. He was able to convince Fermo Favini to leave Como Calcio and give him responsibility for the youth sector.

The Atalanta youth system has not only increased the production of players for the first team, but has helped win multiple titles in the major national leagues. From 1991 to 2014 the various youth teams won 17 national titles.

Successes of the youth teams