The club has never been relegated from the first division in its history. It existed in four different states: Austria-Hungary , the "two" Yugoslavia , and today's Croatia.

The fan club Torcida Split, founded in 1950, is, according to its own statement, the oldest fan organization in Europe . The motto of the association is Hajduk živi vječno (“Hajduk lives forever”).

The story of Hajduk Split begins in 1911, when four students (Fabijan Kaliterna, Lucijan Stella, Ivan Šakić and Vjekoslav Ivanišević) founded the club in the Prague pub U Fleků and brought football to Split for the first time. The association actually got its name from Professor Barać from Split , to whom the students rushed into the office because they couldn't think of a name for the association. When asked if Barać knew a suitable name for their club, the latter replied that they should call him Hajduk .

Before the game Zrinjski Mostar against Hajduk Split on August 13, 1939 (final score 2: 3)

The first Hajduk Split game took place in 1911 against Calcio Split. This team was made up of Italians living in Split . Hajduk won 9-0 (6-0). The first championship title was won in 1927. During the Second World War Split was occupied by the Italians and the club did not accept their offer to play in the Italian premier league. In 1944 Hajduk Split secretly joined the Yugoslav partisans on the island of Vis and played as the official army team.

After the Croatian Spring , the Yugoslav government decided to change the club's coat of arms: the Croatian chessboard had to give way to the Red Star

After the war, the club was invited by Josip Broz Tito to Belgrade to continue playing there as the official army team, but turned down the offer and moved back to the hometown of Split. Hajduk celebrated five cup wins and four championships in the 1970s. The club's first international headlines also come from this time. In 1972/73 Hajduk made it to the semi-finals of the European Cup Winners' Cup , when they lost to Leeds United after both games (0-1; 0-0). In 1975/76 they failed in the quarter-finals of the European Cup after extra time at PSV Eindhoven (2-0; 0-3). Also in the European Cup Winners' Cup 1977/78 they were eliminated in the quarter-finals against FK Austria Wien after penalties (1: 1; 1: 1). In the 1980s, they played a quarter-final and a semi-final in the UEFA Cup, as well as two other domestic cups.

In the 1994/95 UEFA Champions League , Hajduk Split was eliminated in the quarter-finals against eventual winners Ajax Amsterdam . At the 1998 World Cup , five of the eleven Croatian regulars were part of the Hajduk Split squad.

On June 2, 2008, the Split City Assembly decided that the Poljud Stadium, worth 300 million kuna, should be included in the share capital of the new joint-stock company.

On March 28, 2012, Hajduk was suspended by the Croatian Football Association because the club did not pay the required transfer fee of 3.3 million kuna for Ante Rukavina to HNK Šibenik . 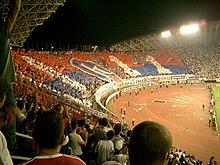 Hajduk Split is cheered on by his ultra group Torcida Split . The greatest rivalry is with the Bad Blue Boys fan group from Dinamo Zagreb , but also with the Armada Rijeka from HNK Rijeka and the Kohorta from NK Osijek .

On September 26, 1990 the game Hajduk Split against Partizan Belgrade was interrupted by the fans. The Yugoslav flag hanging in the stadium was set on fire.

In November 2007 it was reported that numerous members of the Ultra group from Torcida Split were wearing black T-shirts with the inscription "Hajduk youth" (alluding to the Hitler Youth ) in Fraktur and an eagle with the Hajduk logo (similar to a Nazi party Symbol). The t-shirts were also sold on the Torcida website. When asked by reporters, Stipe Lekić, a member of Torcida Split, said that "Torcida Split has always had a right-wing extremist attitude".

During the away game against Inter Milan in August 2012, Croatian hooligans caused a stir when they rioted before the game. Security forces and police officers were injured. The police used tear gas against the rioters. A total of 33 hooligans were arrested.

During the away game against HNK Rijeka on September 28, 2013, serious riots broke out after burning torches were thrown onto the field and into the audience. The game was interrupted. A large police presence prevented the Torcida from storming the field.

Hajduk has been playing in the city's Poljud stadium in Split since 1979 , which was built for the 8th Mediterranean Games in Split in the district of the same name according to the designs of Boris Magaš with a roof structure in the form of an open shell and today offers almost 35,000 seats.

After the establishment, Hajduk initially played its home games on the Kraljeva njiva (Königsfeld). After the Second World War , the Stara plinara (old gas works) stadium was built on this field , which is now called the Stari plac (old square) stadium and is used for rugby games or music concerts.

Hajduk Split's youth have already produced a number of top European footballers, past and present.