The Greek national team represents the Greek Football Association at international tournaments. Most recently, could national team for both the Euro 2008 and 2012 and the 2010 and 2014 took place World Championships qualify. In 2008 she was eliminated in the preliminary round and in 2012 she was able to prevail in the final group game against the favorites Russia in a final with 1-0. Russia was eliminated from the tournament due to this defeat. Her greatest success is the title at the 2004 European Championship under German coach Otto Rehhagel , who coached the team from 2001 to 2010.

The Greek football association is called "Elliniki Podosfairiki Omospondia" and was founded in 1926. Although football has a long tradition in Greece , international success has been sparse.

The first international match recognized by FIFA took place at the Olympic Games in Antwerp before the association was founded and was lost 9-0 to Sweden on August 28, 1920 . At the interludes in Athens in 1906 , a team from Athens took part, which took 4th place, and a team from Thessaloniki , which at that time still belonged to the Ottoman Empire and only came to Greece in 1913. The games are not included in the FIFA statistics. The first game since the association was founded and also recognized by FIFA took place on June 30, 1929 in Sofia against Bulgaria and ended 1-1. Previously there had already been an international match on April 7, 1929 against Italy in the Apostolos Nikolaidis Stadium in Athens. In front of 15,000 spectators, Apostolos Nikolaidis' team lost 4-1 to the Italian B team, the only Greek goalscorer in this game was the striker Alvertos Namias . The first win came in the international match on January 26, 1930 against Yugoslavia (2-1).

In the period that followed, the Greek national team had no major successes worth mentioning and it was not until 1980 that the team could qualify for a major tournament. In that year the team qualified for the 1980 European Football Championship in Italy, in qualification group 6 the Greeks prevailed against Hungary and the Soviet Union. The group draw showed that Greece had to compete against the defending champion ČSSR , Vice European Champion Germany and Vice World Champion Netherlands .

In the first game of the European Championship in 1980, the Netherlands lost 1-0, with Kees Kist's goal only from a penalty. Another defeat followed three days later when the Greeks lost 3-1 to Czechoslovakia. Nikos Anastopoulos had made it 1: 1 in the meantime. In the last group game, they managed a 0-0 win against the eventual European champions, who, however, had already qualified for the final and therefore did not use some regular players.

14 years later, Greece qualified for a World Cup finals for the first time, the 1994 World Cup in the USA, but the Hellenes lost all their games and finished last in their group with 0 points and 0:10 goals.

After the unexpected qualification for the 2004 European Championship , the Greek team caused one of the biggest surprises in football history: They won the title with their coach Otto Rehhagel, who has been with Greece since 2001, with a 1-0 final victory over hosts Portugal . In English betting shops, Greece had been traded as a 100: 1 underdog before the start of the tournament.

The Greek Football Association (HFF) was suspended by the FIFA Emergency Committee on July 3, 2006, as the situation of the HFF did not comply with the principles of the FIFA Statutes regarding the autonomy of member associations and independent decision-making processes of the football authorities in each country. After the Greek parliament passed an amendment to the national sports law, the ban was lifted on July 12, 2006.

After failing to qualify for the 2006 World Cup, the Greeks competed as defending champions at the 2008 European Championship , but were eliminated in the preliminary round after three defeats, including against eventual European champions Spain. 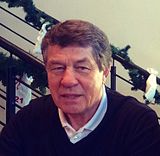 Otto Rehhagel in 2014 - 10 years after winning the European Championship

In November 2009 Greece managed to qualify for a World Cup for the second time. After a 0-0 play-off first leg, the team in Donetsk won a 0-1 away win against Ukraine. On June 17, 2010, Dimitrios Salpingidis scored the first ever Greek World Cup goal in the 44th minute of the second group match between the Greeks at the 2010 World Cup against Nigeria . The goal also led to the first victory in a World Cup game. Furthermore, Argentina and South Korea were opponents in group B at the World Cup.

Rehhagel resigned from his coaching post after the 2010 World Cup, and was succeeded by the Portuguese Fernando Santos .

In Group F for the 2012 European Championship qualification , the team met Croatia , Israel , Georgia , Latvia and Malta and qualified as group winners on the last day of the match.

Participation in the finals of the European Football Championship

Angelos Charisteas ( far left) headed the winning goal against Portugal in the 2004 European Championship final (final score 0: 1). The striker is the most successful Greek goalscorer after Nikolaos Anastopoulos . 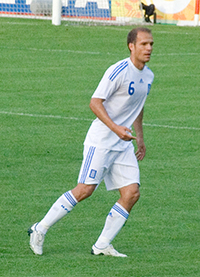 Angelos Basinas , Greek team captain at the 2004 European Championships and player with the fifth most international appearances.

Greece took part in the final round of the European Championship four times, once with eight participants and three times with 16 participants.

Participation in the finals of the soccer world championship

Participation in the Summer Olympics for senior national teams

Participation in the Confederations Cup

Greece has taken part once so far, in 2005 as European champions in the FIFA Confederations Cup , which has been held since 1997 , but failed in the preliminary round to Central and North American champions Mexico , who scored the only point at 0-0, as well as world champions Brazil and Asian champions Japan .

Greek starting line-up for the friendly against Austria in August 2013
→ Main article : List of international matches for the Greek national football team

The Greek national team at the European Football Championships