The DHB and the German Handball League (HBL) oversee the national handball leagues and those involved (players, officials, referees, etc.). The line-up and supervision of the various national teams of all ages occupy a special place in the activities. In the DHB, concepts and interpretations (such as rules or instructions from the International Handball Federation (IHF)) are bindingly regulated for all German associations. The marketing company Handball Marketing Gesellschaft (HMG), founded in 1991 , takes care of a professional presentation of the Handball brand and is the exclusive owner of the marketing rights for all DHB products, such as national teams, referees of the 1st and 2nd Bundesliga, DHB-owned events etc.

On October 1, 1949, 46 delegates met in the town hall in Mülheim an der Ruhr and founded the DHB. Willi Daume was elected first president. As chairman of the German Working Committee for Handball, Daume laid the foundations for the umbrella organization. The Northeast German Handball Association was dissolved on June 30, 2011. The Southwest German Handball Association was dissolved on December 31, 2011.

The following national competitions are held under the umbrella of the DHB:

All Bundesliga teams from the previous season and other clubs that qualify through regional cup competitions compete against each other in the knockout system . There are three main rounds for men and two for women. The teams in the 1st Bundesliga start in the third round for men and in the second round for women. This was followed by further playout in eighth and quarter finals as well as a final weekend in final four mode.

The men's DHB Cup has been played since 1975. The first title holder was TSV Grün-Weiß Dankersen , the record holder is THW Kiel .

The women's DHB Cup has been played since 1975. The first title holder was TSV GutsMuths Berlin , the record holder is TSV Bayer 04 Leverkusen . 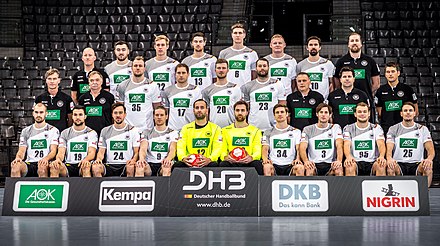 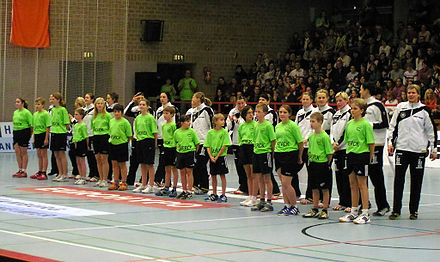 Both the women's and men's national handball teams have been world champions since they were founded.

Successes at the Olympic Games

Successes of the juniors

Achievements of the female and male youth

Only one of the former five regional associations is a member of the DHB:

The following 22 regional associations are members of the DHB:

League associations of men and women

The following league associations for men and women are members of the DHB:

People who have made a special contribution to handball or the DHB can be appointed honorary members at the request of the Extended Presidium. You have a seat in the handball Bundestag.

The social commitment in handball is clear from the fact that member associations and individuals in the German Handball Federation have been supporting the German Cancer Aid against the common disease of cancer for years . Thanks to charity events and donations from numerous handball clubs from all federal states, the “HANDBALL HILFT” project became the “biggest charity campaign that has ever taken place in handball”. With this slogan, according to the initiators, social engagement stands “for the whole of handball and is part of it”.

Since summer 2019, the social commitment of the DHB has also focused specifically on primary prevention against skin cancer . The German Cancer Aid Foundation and the DHB have chosen the beach handball sector for an educational cooperation on the health risks of excessive UV radiation, as announced by Axel Kromer, the DHB's Sports Director. In the beachball trend sport, “correct sun protection is a must”, emphasized Krebshilfe CEO Gerd Nettekoven . The UV radiation from the sun could increase the risk of skin cancer and weaken the immune system. The new cooperation partners want to provide up-to-date information on cancer prevention in the positive environment of this popular sport.

The DHB supports an action by all German handball associations. According to this, all teams nationwide have the opportunity to attempt a world record. Which team manages the most passes in 60 minutes? to participate. The three teams that have played the most passes in 60 minutes according to the given rules (video recording is mandatory) are sent to Guinness World Records in London , where the record attempts are checked.

National member associations of the EHF

President of the German Handball Federation

The top divisions of the German Handball Federation in men's handball