History of the DTU

In the spring of 1982, the ZDF sports report broadcast a ten-minute report on the Ironman Hawaii of the same year, which was compiled from the material provided by the US broadcaster ABC . That was the trigger for the triathlon competitions organized for the first time in Germany that same year. They took place in Hückeswagen , Gerolstein , Essen , Kehl (all in 1982) and in 1983 in Immenstadt and as A3K in Rostock . Günter Kissler from Koblenz organized a European championship over the long distance in September 1984 at Fühlinger See in Cologne. He later founded the popular sports-oriented German Triathlon Association (DTrB). At the same time, Manuel Debus , the first German finisher at the Ironman Hawaii in 1982, founded the more competitive German Triathlon Association (DTV).

See also : History of the triathlon in Germany

On February 23, 1985, DTV and DTrB merged in Worms to form the German Triathlon Union. The founding president was the Heigenbrück dentist Joachim Fischer. In 1987, the then twenty-seven-year-old Martin Engelhardt , former Bundesliga swimmer and assistant doctor at Hanau City Hospital, who two years earlier had founded the Triathlon Association of German Doctors and Pharmacists (TVdÄA) in Hanau, which dominated the German triathlon scene at the time, succeeded him as President. On December 5, 1987, the DTU was accepted into the German Sports Association. On October 28, 1990, the Triathlon Association of the GDR, which was only founded in May, integrated itself into the DTU with its five regional associations. With 16 regional associations and 17,445 members, the DTU has become the nation with the largest number of members within the European Triathlon Union (ETU).

In 2001 Klaus Müller-Ott , a general practitioner from Bornhöved , succeeded Martin Engelhardt as DTU President. He was followed in February 2008 by the sixty-three-year-old Rainer Düro, who previously headed the Rhineland-Palatinate state association for thirteen years. Eight months later, the thirty-nine-year-old lawyer Claudia Wisser prevailed among three candidates as the successor to the health-stricken office. On November 6, 2010 in Worms, the DTU celebrated its 25th anniversary, where Wisser declared that he would not stand again and the state associations elected the 66-year-old former member of the Bundestag Reinhold Hemker as the new President of the DTU. Just 103 days later, Hemker also announced his resignation for health reasons. The two vice-presidents Reinhold Häußlein and Bernd Rollar acted as the interim executive board until Martin Engelhardt was re-elected president in November.
In November 2018 Engelhardt was confirmed as president for another four years at the DTU Association Day.

In 2015 the DTU had 54,000 members who are organized in over 1,500 German triathlon clubs, including 26,000 starter pass holders. In total there were around 250,000 participants in triathlon events in Germany in 2014. In terms of membership, the DTU is the second largest triathlon association in the world. The DTU is organized in a total of 16 regional associations, of which the Bavarian Triathlon Association, which was founded in 1984, is not only the oldest, but also the largest with around 12,500 members and 359 clubs, ahead of the North Rhine-Westphalia Triathlon Association with 11,000 members in 280 clubs.

The DTU organizes the German Triathlon League (DTL) with the 1st and 2nd Bundesliga on a national level . Other leagues are organized by the regional associations. Furthermore, the DTU advertises the German championships , appoints the national team , trains trainers , carries out public relations work for the sport of triathlon and looks after its members, creates and maintains uniform regulations, trains referees and thus enables safe and fair competition.

In 1998, Reinhold Häusslein followed for a transitional period until, in 1999, in the immediate preparation for the Olympic Games in Sydney , where triathlon was part of the program for the first time, Ralf Ebli took over the position of national coach. After the Olympic Games in Athens , Ebli decided not to extend the contract and his previous assistant Louis Delahaye took over his role. In 2009 Roland Knoll, who had previously worked as a junior coach since 2004, took over the position of national coach. At the same time, Nina Eggert took on the training of young women in November 2010. In 2013 Ralf Ebli returned to the DTU as head coach together with Dan Lorang. Faris Al-Sultan has been the national coach of the German Triathlon Association
since 2018 .

Zurich Versicherung has been the official main sponsor of the DTU and the German national triathlon team since 2020 .

As a youth organization of the DTU, the German Triathlon Youth is responsible for the interests of children and young people. Its orientation is of a broad-based sporting nature and its mission statement is based on the requirements of the German Sports Youth (dsj).

The aim of the youth work of the German Triathlon Youth is to promote and support children and young people in their entire development through sport.

A one-piece suit with sleeves is common for swimming. Two-piece suits and neoprene hoods may also be used. The maximum total material thickness of a cold protection suit must not exceed 5 mm and it must not consist of more than three individual parts.

Whether the wearing of the neoprene parts is allowed depends on the swimming distance and the water temperature on the day of the competition. According to the DTU regulations, there is no swimming if the water temperature is below 14 ° C. Youth A and Youth B (14–17 years) are not allowed to swim below 17 ° C and a limit of 19 ° C applies to schoolchildren.

The Bundesliga and elite starters are no longer allowed to wear a Neo up to a swimming distance of 1.5 km from 19.9 ° C water temperature and the 21.9 degree mark applies to age group athletes (amateurs) on the same distance.

The athlete may run or walk over the running distance. The minimum clothing is one-piece or top and pants.

Justus Nieschlag at the final of the Grand Prix de Triathlon in Nice, 2012

Before 2011 (except for 2008) the German triathlon championships were held over the Olympic distance (1.5 km swimming, 40 km cycling and 10 km running).

Since 2002, the "Juniors" age group has included all athletes who were 18 or 19 years old on December 31 of the competition year.

Up to and including 2001, the “Juniors B” age group, for whom the maximum permitted competition distance was the sprint distance, included all athletes who were 17 or 18 years old on December 31 of the competition year.

The German championship on the "triathlon short distance" (also "Olympic distance") covers the distances of 1.5 km swimming, 40 km cycling and 10 km running and was last held in 2012.

The first German championships on these distances were held in 1984 in Losheim am See in Saarland.

Before 2011 (except for 2008), the German triathlon championships were held over the Olympic distance and since then over the sprint distance .

Anja Dittmer from Neubrandenburg has already secured the title of German champion five times. Ralf Eggert was able to achieve his fourth victory in 1999 and is tied with Christiane Pilz , who took her fourth title in 2009.

Ricarda Lisk , Daniel Unger and Lothar Leder can look back on three victories or championship titles on the short distance .

The German U23 championship has been held over the sprint distance since 2013 (see above).

The planned standard distances for the middle distance are 1.9 to 3 km swimming, 80 to 90 km cycling and 20 to 21 km running according to the DTU sports regulations.

Due to local circumstances and local conditions, the sports regulations allow a deviation of up to ± 10% in the sub-disciplines compared to these standard distances.

From 1994 to 1999 the DTU did not announce any German championships over the middle distance, in order to allow the Olympic distance more attention with regard to the Olympic Games 2000 in Sydney, where triathlon was part of the competition program for the first time.

Until 1993, a qualification was required for a start at the German championship middle distance, since 2000 this has only been an additional rating for all starters who are in possession of a valid DTU start pass.

The championship, which was held for the first time as part of the Challenge Heilbronn in June 2016, had to be held as a duathlon due to the weather - but the DTU decided to use the result as DM.

On May 19, 2019, the German championships were held again after 2016 as part of the Challenge Heilbronn and Sebastian Kienle won the title of German champion for the third time.

Long-distance triathlon championships have been held annually in July or August in Germany since the first Jümme Triathlon in 1994 . The long distance includes 3.86 km swimming, 180.2 km cycling and 42.195 km running.

The championships were held eleven times at the Challenge Roth , seven times in Kulmbach ( Iron Mönch ), in 2011 at the Cologne Triathlon and most recently in July 2016 at the Ironman Germany in Frankfurt am Main .

The championships planned for June 2012 in Kulmbach as part of the Iron Mönch had to be canceled for organizational reasons and no long-distance championship was held this year.

As the most successful German athletes, Sabine Heinrich and Siegfried Ferstl have each won the title four times.

In 2016, the German championships were held as part of Ironman Germany , in 2017 at Challenge Regensburg and in 2018 as part of the second edition of Ironman Hamburg .

The distances go over here

As the most successful athlete, Katrin Hill was able to win the title of state champion cross-triathlon for women six times between 2003 and 2010 (started as Katrin Helmcke until 2005). Ronny Dietz won
the men's title five times between 2001 and 2011. Jens Roth won the title for the fifth time in a row in 2019 and Sebastian Kienle last won the title three times in 2010. 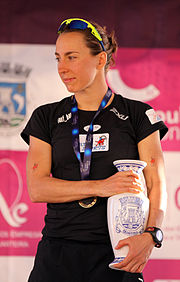 Since 2002, the “Juniors” age group has included all those athletes who were eighteen or nineteen years old on December 31 of the competition year.

The Powerman Germany planned for May 31, 2015, had to be canceled due to the low number of registrations and in 2016 the venue was relocated to Ulm .

In the cross duathlon, cycling in the field (mountain bike) and cross-country running are combined.
The German Cross Duathlon Championships were last held in Östringen on September 29, 2018 .

There are eight athletes in the perspective squad and five in the supplementary squad.

In the 2018 season, however, Anne Haug , Anabel Knoll , Hanna Philippin and Maximilian Schwetz no longer belong to the squad .