The human arm, the ulnar nerve, can be seen on the side of the little finger 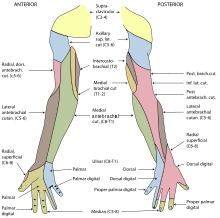 The ulnar nerve (" ulnar nerve ") is a nerve of the brachial plexus (arm plexus ). It has fibers that - coming from the medial fasciculus of the brachial plexus - have their origin in the 8th neck segment (C8 - between the 7th cervical and 1st thoracic vertebrae) and in the 1st thoracic segment (Th1) of the spinal cord . In some mammals it also draws fibers from the 2nd thoracic segment (Th2 - emerging from the spinal canal behind the 2nd thoracic vertebra ).

The ulnar nerve runs on the inside of the upper arm to the elbow hump . It breaks through the medial intermuscular septum. At the medial epicondyle of the humerus , it can be felt through the skin and when struck it can cause a severe pain reaction in its sensitive innervation area (in Germany "music bones", "musicians bones", "musicians bones", "mäuschen / mäusle", in Saarland "Geggisch Oder" , in Austria also "narrisches Bein", "narrisches Band'l" or "damisches Aderle", in Switzerland "Narrenbein", "Surribei" or "Surrbeindli"). In addition, he pulls on the elbow side of the forearm towards the hand down to the little finger.

In the forearm , the motor innervates the:

In the hand area , the nerve innervates the muscles of the little finger ball ( abductor digiti V , flexor digiti V brevis , opponens digiti V ) and most of the short muscles of the metacarpus ( lumbrical muscles III and IV, interossei muscles , adductor pollicis muscles and caput) profundum of the flexor pollicis brevis muscle ).

The muscles supplied by the ulnar nerve are involved in the flexion and ulnar abduction of the wrist, in the flexion of the ring finger and little finger. You practically only perform the spreading of the thief fingers (ie all fingers except the thumb) and the closing of the thief fingers. In addition, the lumbrical muscles flex the basal limbs of fingers IV and V and stretch the middle and end limbs.

There are numerous variants of innervation of the small hand muscles. In some people, some of the hand muscles usually supplied by the ulnar nerve are innervated by the median nerve, which then plays a corresponding role in their function.

In humans, the ulnar nerve gives off the sensory ramus dorsalis roughly in the middle of the forearm or a little below it , its end branches, the nervi digitales dorsales , the skin on the extensor side of the elbow-side half of the middle finger and the skin of the extensor side of the ring finger and little finger between Treat the wrist up to the middle joint of the finger. In isolated cases there may be a transition from the median nerve to the ulnar nerve; this is called the Berrettini connection.

The sensitive ramus palmaris , which extends slightly below, supplies the elbow-side portion of the flexor side of the wrist as well as the small finger balls close to the body.

In domestic animals , the ulnar nerve releases the caudal cutaneus antebrachial nerve , which supplies the back of the forearm sensitively. Above the forefoot, it divides into a ramus dorsalis and a ramus palmaris . The ramus palmaris is connected to the median nerve . The two terminal branches of the ulnar nerve supply the skin of the outer toe and the deep structures of the forefoot.

The ulnar nerve palsy is the most common peripheral nerve damage in humans. Depending on the location of the damage, one speaks of an ulnar channel syndrome or a Loge de Guyon syndrome .