A nerve fiber is the term used to describe the extension of a nerve cell encased by glial cells , for example the axon of a nerve cell with its myelin sheath . In the peripheral nervous system , several nerve fibers are usually combined into nerves by additional connective tissue sheaths .

Fig. 1. Myelination stages of the brain according to Paul Flechsig . The dark areas become early, the light gray later and the white z. Sometimes myelinated only during puberty.

Myelination is called the multiple wrapping of the neurite of a nerve cell by enveloping glial cells , whereby the axon is electrically isolated in such a way that a faster conduction of excitation is possible with the remodeling of its internodes . Projections of nerve cells are initially simply enveloped by glial cells, and only later some are repeatedly and thus become myelinated ( medullary ) nerve fibers. This process takes place ontogenetically in a certain order, which often also reflects a sequence of steps in the developmental history of the nervous system and the brain - as Paul Flechsig (1847–1929) already pointed out. For example, motoric connections are myelinated before sensitive ones, and basic connections are myelinated before additional ones. Because some connections can only become functional when others are already.

However, the formation of a medullary sheath is not a prerequisite for functional nerve cells. Numerous nerve fibers remain for life without myelin sheath ( unmyelinated ) and yet functional - for example in the vegetative nervous system, in the self apparatus of the spinal cord, in the reticular formation of the brain marrow - even in the retina and brain. The elaborate medullary sheath increases the line speed , which only makes clear differences over longer distances.

Longer axons are myelinated, primarily those from neural connections that carry sensory or motor relationships of the body in its environment ( oicotropic relation to somatic fibers). Because in relation to other living beings, the speed of the reaction to a stimulus plays a role that increases in competition. Signal lines, on the other hand, which mediate the relationships of the body as its own inner world ( idiotropic reference to visceral fibers) and which influence the functions of its viscera, usually do not need this acceleration.

Sprouting nerve cell processes are surrounded by glial cells, permanent ones receive a glial covering, and many later, during certain phases of development, also get a real myelin sheath or myelin sheath . Within the CNS , it is formed by oligodendroglial cells that arise from neuroepithelial cells of the neural tube . Outside, in the nerve fibers of the peripheral nervous system , this task is taken over by Schwann cells , glial cells that arise from neuroectodermal cells of the neural crest .

During the development of the myelin sheaths ( myelogenesis or medullary maturation ), the Schwann cells grow, depending on the type of nerve cell, up to about 50 times around the nerve cell process and wrap it several times with double layers of their cell membrane. A single Schwann cell wraps around only a section of an axon up to 2 mm long, the internode , so many Schwann cells are lined up next to one another along the common axis cylinder around the axon.

With an increasing number of windings, the diameter of a nerve fiber increases with the same axon diameter. Depending on the thickness of the myelin sheath or the number of myelin sheath lamellae, a distinction is made between the myelinated nerve fibers in myelinated (strongly myelinated) and myelinated nerve fibers. So-called medullary nerve fibers (better: medullary sheaths ) have no medullary sheath, but in the PNS they are also sheathed by glial cells, in whose side folds they run. However, this single-layer shell insulates so little that action potentials have to be passed on continuously , which is why the conduction of excitation is significantly slower than with axons in a myelin sheath.

In the case of somatic nerve fibers that afferent or efferent to the body wall - and can thus convey rapid reactions to changes in the environment - the myelinated nerve fibers make up the largest proportion. Their axon diameter is only about half the cross-section of the nerve fiber because of the thick insulating layer. Only this enables the so-called saltatory excitation conduction with a multiple increased nerve conduction speed . For this purpose, there remains a small gap between two Schwann cells, called Ranvierscher Schnürring or knot ( Latin nodus ), and only in this (nodal) area is the axon so exposed that an action potential can be built up here - which each takes a certain amount of time . In contrast, the strongly isolated (internodal) span between two cord rings is now bridged solely by rapid electrotonic transmission, so that the action potentials are only passed on in leaps and bounds. In demyelinating diseases , for example multiple sclerosis , the myelin sheath around axons of central neurons is lost in sections , as a result of which this conduction of excitation is disturbed, which can manifest itself, among other things, in sensory disorders or paralysis. 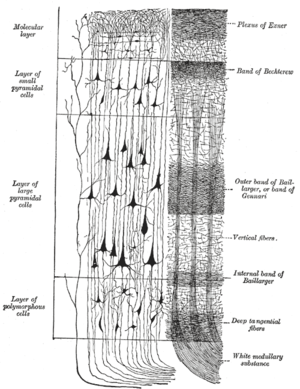 Fig. 3. Cyto- and myelo-architectural structure of the cerebral cortex or layer structure of the isocortex :
Laminae II and III as well as laminae IV and V are summarized in this illustration.

The cyto- and myelo-architectural structure of the cerebral cortex is spoken of when one wants to describe the relationship between cells and medullary fibers in a certain brain section (e.g. in the cerebral cortex, see Fig. 3). The creation of corresponding maps of the cerebral cortex, in which structures and functions were linked to one another, goes back to Karl Kleist (1879–1960), Korbinian Brodmann (1868–1918), Cécile Vogt (1875–1962) and Oskar Vogt (1870–1959 ) and to Constantin von Economo (1876–1931).

The individual surrounded nerve fibers are separated from one another by very fine connective tissue lamellae, the so-called endoneurium . It consists of reticular fibers and a basement membrane.

Several such fibers are grouped together by the so-called perineurium to form fiber bundles ( fascicles ), which consist of collagenous connective tissue .

The epineurium eventually envelops the entire peripheral nerve (i.e., several bundles of nerve fibers) and fixes it in the surrounding tissue.

This covering of connective tissue gives the nerves greater elasticity (through elastic fibers ), protects against pressure and serves the Schwann cells for nourishment, as the blood vessels run in these connective tissue lamellae.

The supply of organs or body parts with nerve fibers and their transmission of stimuli is known as innervation . Nerve fibers or whole nerves can be classified according to various criteria:

According to their primary effect, a distinction is made between three different fiber qualities: sensitive, motor, vegetative.

Sensitive fibers conduct sensations registered by receptors from the body to the central nervous system. According to the direction of the conduction of excitation, one also speaks of afferent fibers. In the German-speaking world, sensory fibers are often separated from sensitive ones . Sensory fibers conduct excitations from specific sensory organs ( eyes , ears , taste ). However, the delimitation is quite artificial, because sensitive fibers also have specialized nerve endings. This differentiation is not carried out in English, both sensitive and sensory are classified under the term sensory .

A special form are viscero- sensitive ( viscera "entrails") fibers that convey sensations from internal organs. But they are mostly counted among the vegetative fibers.

Motor fibers innervate the skeletal muscles . There, the excitation is transmitted to the muscle fiber via a motorized endplate , which stimulates a contraction . Occasionally the branchomotor nerves are separated from the motor nerves . These innervate skeletal muscles that arise from the gill arches . According to the direction of the excitation line, these are efferent fibers. There are no purely motor nerves. In nerves classified as "motor", afferent fibers always run from the receptors in the muscles ( muscle spindle , Golgi tendon organ ), which register the current tone of the muscle.

Visceromotor nerves innervate the smooth muscles of the intestines and blood vessels and are part of the vegetative fibers.

The nerve tracts of the autonomic (vegetative) nervous system are called vegetative fibers . They can also be classified as parasympathetic or sympathetic and also as enteric according to their affiliation to the respective system . A distinction is made according to their primary function or direction of leadership