Brodmann was the son of the farmer born Josef Brodmann and a maid and attended from 1874 to 1880 the elementary school in Liggersdorf / Hohenzollern , following the public school in Ueberlingen and high schools in Sigmaringen and constancy . Brodmann studied medicine in Munich , Würzburg , Berlin and finally in Freiburg im Breisgau from 1889 to 1895 , where he completed his studies in 1895. In 1895 he was licensed to practice medicine. Then Brodmann worked for a few weeks as a general practitioner in the Black Forest. He spent the summer semester of 1895 at the University of Lausanne (Switzerland), where he attended lectures, but was not enrolled as a student. In the winter semester of 1895/96 Brodmann began to work as a volunteer at the children's outpatient clinic of the Reisingerianum at the University Clinic in Munich . During this time he fell ill with diphtheria and, as Oskar Vogt wrote in his obituary for Brodmann, “for his recovery” took on an assistant position at the mental hospital in Alexandersbad in the Fichtelgebirge, which he directed . After his stay in Bad Alexandersbad, Brodmann spent the winter semester of 1896/97 in Berlin before moving to Leipzig, where he worked at the Pathological Institute of the University of Leipzig . In 1898 he acquired the Dr. med. at the University of Leipzig with a thesis on chronic ependymal sclerosis . From 1898 to 1900 Brodmann worked as an assistant doctor at the Psychiatric Clinic of the University of Jena under Otto Binswanger . In June 1900 Brodmann began his work at the municipal mental hospital in Frankfurt am Main . There he met Alois Alzheimer in 1901 , who encouraged him to do basic neuroscientific research.

As a result of this suggestion, Brodmann went from August 1901 to October 1910 to Oskar Vogt's private institute Neurological Central Station in Berlin, from which the Neurobiological Laboratory of the University of Berlin emerged in 1902 and the Kaiser Wilhelm Institute for Brain Research in 1915 . In 1909 he created his main work " Comparative Localization Theory of the Cerebral Cortex " at this institute . His habilitation thesis “ The cytoarchitectonic cortex structure of the semi-monkeys ”, the basis for the division of the cerebral cortex into fields, which was later named after him , was rejected by the Berlin faculty.

Over time, the relationship between Brodmann and Vogt deteriorated increasingly. This development finally resulted in a letter from Vogt to Brodmann, in which Vogt announced Brodmann's dismissal on August 1, 1910. Brodmann asked Vogt to withdraw his notice for the time being and offered him to give notice on October 1, 1910, which the two eventually agreed on. The reasons for the rift between Brodmann and Vogt are not clear. After leaving Berlin, Brodmann took a position at the Clinic for Mental and Nervous Diseases at the University of Tübingen , where he was able to do his habilitation and worked his way up from assistant doctor to private lecturer and senior physician and was finally appointed professor in 1913 . In 1916 he moved to Halle to work at the Nietleben hospital ( state sanatorium ). There he met the medical-technical assistant Margarete Franke, whom he married in April 1917. Their daughter Ilse was born in January 1918.

Brodmann finally received a call to the Ludwig Maximilians University in Munich , where he worked from April 1, 1918 as head of the topographical-histological department of the German Research Institute for Psychiatry, later the Max Planck Institute for Psychiatry . In August, however, Brodmann died at the age of 49 after a short illness of sepsis . It was presumably a flare-up of an infection that he had contracted a year earlier during an autopsy.

The well-preserved grave of Brodmann and his wife is located in the main cemetery in Forst (Lausitz) . 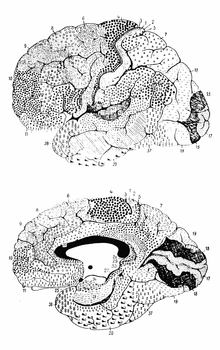 After various previous publications, including in 1903 and 1908, Brodmann published his final results on the cell architecture of the cerebral cortex in 1909 ( comparative localization theory of the cerebral cortex presented in its principles based on its cell structure ). He divided the cerebral cortex into 52 fields according to histological criteria, which are named after him as Brodmann areas . Although Brodmann began to recognize the functional importance of the subdivision (e.g. area 4 as a motocortex according to the previous descriptions by Exner, 1894, and Campbell, 1903), it was only later that it became clear for most areas what they were for the function of the Brain mean. The areas include, for example

The work of neuroanatomists like Brodmann has made it clear that the cortical surface, in addition to the more easily measurable volume, is an important parameter in the description of the brain. There were first attempts to do this from the middle of the 19th century. For the first systematic and detailed measurements, Brodmann and his friend and neuroanatomist Henneberg-Neubabelsberg jointly developed a method for which the surface of the bark was covered with tissue paper. In 1913, Brodmann published a database of a wide range of mammals that is still used today .

In his birthplace Hohenfels-Liggersdorf (Hauptstrasse 30) there is a museum with his name.

His work, the topological mapping of the cerebral cortex in numbered fields and areas, is still valid today.

“ With the introduction of modern imaging processes, Brodmann's work has acquired a significance that goes far beyond what Brodmann himself expected. There are only a few scientific works that in our fast-moving times and in scientific medicine retain their importance for as long as the work of Korbinian Brodmann "