The visual cortex (also visual cortex ) is that part of the cerebral cortex , of the visual system is one which, in turn, the visual perception possible. The visual cortex occupies most of the occipital lobe of the brain. According to Korbinian Brodmann's brain map, areas 17, 18 and 19 correspond to it. It is divided into the primary visual cortex (V1) and secondary or tertiary (associative, V2 – V5) areas. Histologically , it is characterized in primates by the high cell density and the comparatively small thickness (in humans 1.5–2 mm). Area 17 (also area striata ) directly represents the opposite half of the field of vision and is built up “retinotop”, which means that points shown next to each other on the retina are also next to each other here. The cells that represent the fovea are clearly overrepresented and take up about half of the area striata. 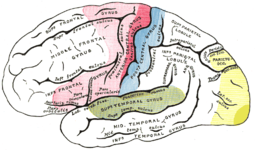 The cerebral cortex and some functions: The visual cortex (yellow right) lies in the back of the head ( occipital lobe ). The impulses coming from the optic nerves of the eyes are passed on via the optic nerve half-junction to the cortical field of vision and processed there.

The primary visual cortex ( Brodmann area 17, V1; area striata ), like the entire neocortex (differentiated from archi- and palaeocortex), is divided into six layers:

In addition to the layer organization, there is a columnar (columnar) structure in V1, as in the rest of the cortex, which in each case reflects an orientation.

The primary visual cortex area V1 has a particularly thick layer IV. Many afferent fibers of the neurons of the corpus geniculatum laterale (CGL) end here. Layer IV is further subdivided into A, B and C, C in turn into Cα and Cβ. The axons of magnocellular layers 1 and 2 of the CGL end in layer IVCα. These neurons, in turn, are derived from ganglion cells of the retina with large receptive fields that have a high temporal but low spatial resolution. The work of David Hubel and Torsten Wiesel revealed that neurons of the IVCα layer are orientation-selective. Individual groups of these cells each respond to visual stimuli along the center of their elongated receptive fields up to a deviation of 10 °. These cells are called simple cells . They project into slice IVB, where they are interconnected binocularly and have directional selectivity (M channel).

Parvocellular neurons of layers III – VI of the CGL end in layer IVCβ and, to a lesser extent, in layers IVA and I. They receive afferents of the ganglion cells with small receptive fields (fovea), show color sensitivity and have a high spatial resolution.

Lesions of magnocellular layers in monkeys caused them to lose the ability to perceive movement, whereas damage to the parvocellular layers prevented the perception of color, fine textures as well as shapes and spatial depth.

The following important information is missing from this article or section:
histology
Help Wikipedia by researching and pasting it .

The V2 is located according to the areas of Korbinian Brodmann in area 18 and has a stripe structure that can be made visible by histological staining of the cytochrome oxidase activity. According to Livingstone and Hubel (1988), these stripes are associated with the processing of individual aspects of perception, form, perception and stereo vision and then have efferents in the higher brain areas.

After the interconnection in V1 and V2, the processing is divided into a dorsal path through the parietal lobe , into the motor areas along the central groove and a ventral path that leads into the areas of the temporal lobe , to which the beginning of object recognition is ascribed. Among other things, V4 and the inferotemporal cortex are assigned to the ventral path. The dorsal path runs through V5 (also called the mediotemporal cortex). The association cortices are, however, not as precisely mapped as z. B. V1, as there are inter-individual differences.

The functional fields of the cerebral cortex