Levoča ( pronunciation ? / I ; German Leutschau , Hungarian Lőcse , Latin Leutsovia ) is a city in northern Slovakia . It is located in the Zips and has 14,722 inhabitants (as of December 31, 2019). Because of the well-preserved city center, the city was declared a World Heritage Site by UNESCO in 2009.

View of the city from the south; Mariánska hora on the right

Administratively, the city is divided into the districts Levoča (also cadastral municipality, German Leutschau ), Levočská Dolina (German [Leutschauer] valley ), Levočské Lúky (German shooting range ) and Závada (cadastral municipality, incorporated in 1976; German Tscherneblod ). After the abolition of the Javorina military district at the beginning of 2011, part of it was added to the city, which increased the area of ​​the municipality from 64 km² to almost 115 km² and included the Dvorce cadastral community ( Bürgerhof in German ).

The following information relates to the straight line distance to the nearest town center, and the distances are commercially rounded to half a kilometer. Cities are highlighted in bold. 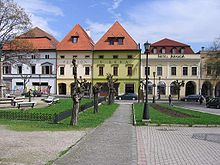 The area was first permanently settled in the early Stone Age . The Slavs settled the area in the 9th to 11th centuries. On the way to Spišská Nová Ves was the so-called "Old Levoča", where archaeologists found a settlement around the foundations of the old Church of St. Nicholas; At today's Kaschauer Tor there was another settlement with the Romanesque Holy Spirit Church, a rotunda church. With the newly founded German settlements that the invited colonists laid out after the Mongol invasion in 1241, today's city was created.

The city was first mentioned in writing in a document from King Béla IV from 1249 as Leucha . With the continued German settlement, Leutschau was declared the most important city of the Spiš County and in 1271 the capital of the Province of the Spiš Saxons . Like other Spiš cities, Leutschau enjoyed various rights, including its own self-government, jurisdiction, ore mining law, right to use forests, trade law and storage law. 1317 the city was by the king Charles Robert of Anjou to the Royal Free City levied. Trade flourished not least because of its location: the city was at the crossroads of trade routes (Baltic Sea – Balkans and East – West). Due to permanent privileges, such as exemption from storage rights in other cities from 1402 and exemption from paying the thirtieth inch throughout the Kingdom of Hungary from 1419, the city was very rich. At the beginning of the 15th century Leutschau joined the Bund Pentapolitana . Regionally, however, there was a centuries-long dispute over the leadership position with the city of Käsmark . After a Hussite attack in 1431, the city burned down. Nevertheless, the 15th and 16th centuries were the height of urban development. During this time, the copper trade , with which the Thurzo family became famous, flourished and the citizens traded with Krakow, Hanseatic cities and Venice. Neither the fire of 1550, in which the majority of Gothic architecture disappeared, nor the fire of 1599 slowed down development. In 1597 a synod took place in Leutschau, in which priests were forbidden to allow lay people to cohabit against payment of a fine. The rich city supported education and culture. Well-known personalities of this era are the sculptor Paul von Leutschau , the English poet Leonard Cox and the humanist Johann Henkel. A large part of the population worked in the more than 40 guilds (tanners, leather workers, locksmiths) or in various crafts (goldsmiths, sculptors, stonemasons, painters).

But the heyday was over at the end of the 16th century and throughout the 17th century, mainly due to the Hungarian uprisings of Stephan Bocskay , Gabriel Bethlen , Franz I Rákóczi and Franz II Rákóczi . Two legends date from this period that later became the subject of the novels by the Hungarian writers Kálmán Mikszáth and Mór Jókai (see literature). The city's first printing press was bought in 1624, and the city was the center of the Reformation in Northern Hungary (or Upper Hungary ). In the 19th century Leutschau became the smaller center of the Slovak national movement , in particular through the Protestant Lyceum and the associated institute for the Czech-Slovak language and literature. The episode of 1844, when the students of the Bratislava Lyceum came to the city to protest against the removal of Ľudovít Štúr to continue their studies, is particularly well known .

The economic importance of the city continued to decline in the 19th century, as the newly built Kaschau-Oderberger Railway bypassed the city 10 km south in 1871 and served the city of Spišská Nová Ves (today Spišská Nová Ves). In 1898 a branch line was built from there . Even so, the city was little more than the administrative center of Spiš County.

After the collapse of Austria-Hungary in 1918, Leutschau came to the newly formed Czechoslovakia ( confirmed under international law by the Treaty of Trianon ). During the Second World War, the local Jewish community was almost completely deported to the German extermination camps . In 1950 the old town was declared an urban monument reservation. After the independence of Slovakia in 1993, the city became again the seat of an okres in 1996. On July 3, 1995, Pope John Paul II celebrated a mass on Mariánska hora in the presence of 300,000 pilgrims.

In 2009 the old town and the works of Paul von Leutschau were added to the UNESCO World Heritage List .

In 2017 Levoča was awarded the honorary title of “ Reformation City of Europe ” by the Community of Evangelical Churches in Europe .

Below is a record of the names since the first written mention. The names listed here were not only used at the specified time and are not mutually exclusive.

The city has a fully preserved historic inner city. The most famous monuments are located on the market square with the town hall, the pillory , the Thurzo house and the parish church of St. Jakob . This church has the world's highest Gothic altar at 18.62 m. It was made in the workshop of Paul von Leutschau , a contemporary of Tilman Riemenschneider and Veit Stoss . Levoča is also a well-known pilgrimage site with the Marienberg . The pilgrimages go back to the 13th century. The first written records of the devotion to Mary date from this time .

The town is located on state road 18 , with connections to Poprad and Prešov, and on state road 533 to Spišská Nová Ves. The partially completed D1 motorway (Bratislava – Košice, E 50 ) runs south past Levoča , with a connection to the Levoča junction (350 km) southwest of the city.

The branch line from Spišská Nová Ves ends in the town, although since 2003, with the exception of the pilgrimage weekend at the beginning of July, it has no longer had regular passenger traffic. The company SAD Poprad as operates several bus connections with regional destinations (as of 2018).

The nearest international airport is Poprad-Tatry , 34 km away.

Municipalities in the Okres Levoča

Natural heritage: caves in the Aggtelek and Slovak Karst  (1995) | Primeval beech forests in the Carpathian Mountains  (2007)