The Spiš Castle (Slovak: Spišský hrad , pronunciation ? / I ; Hungarian: Szepesi vár or Szepesvár ) is located east of Spišské Podhradie in the municipality of Žehra in the Spiš in northeastern Slovakia . It is one of the largest castle complexes in Central Europe . Its outer walls cover 41,426 m². According to the Guinness Book of Records , only the Prague Castle is even larger at 800 by 180 meters.

The ruins of the Höhenburg (formerly also called “Zipser Haus”, “Zipser Schloss”) rises on a 634 m high rocky travertine cone that rises from a plain between the surrounding mountains. The next larger town is Spišská Nová Ves (German; Zipser Neudorf ). 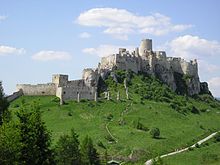 View from the east of the upper castle

Settled at the latest since the Neolithic Age, the castle hill was a center of the Celts , but was apparently abandoned in favor of a neighboring range of hills at the end of the 2nd century.

In the 12th century, a castle was built on the current site where there was previously a fortified Slavic settlement. After the castle withstood the Mongol invasion, it was expanded considerably in the middle of the 14th century. In the 15th century it was acquired by Johann Giskra (Jan Jiskra), who expanded the castle to its present size.

Since the 12th century the castle has been the administrative seat of the Spiš lords . In 1460 the castle became the property of the Kingdom of Hungary and came to the Zápolya four years later . Then the Thurzo received the castle and had the castle complex , which had been redesigned several times, rebuilt in the Renaissance style. After 1636, during the Thirty Years War (1618–1648), the Csáky took possession of the castle. At the beginning of the 17th century there was a structural connection between the previously separate buildings. Since the complex was overtaken by the changing war technology and was very uncomfortable as a residence, the Csáky gave up the castle as a residence. After 1710 it burned down, and after another damaging fire in 1780 it was abandoned by the last military unit stationed there.

In 1945, after the end of the Second World War, the facility was taken into state ownership by Czechoslovakia , partially reconstructed, restored and declared a national cultural monument in 1961 .

Since the end of the 1990s and the establishment of the Republic of Slovakia, work has been carried out on further renovation and preservation of the ruins of the Spiš Castle.

The castle and its surroundings have also repeatedly been used as a backdrop for fairy tale and fantasy films.

Natural heritage: caves in the Aggtelek and Slovak Karst  (1995) | Primeval beech forests in the Carpathian Mountains  (2007)