This article deals with the historical Hungarian county of Zips. For information about today's region see Zips .

Map of Spiš County around 1890

The county was in northeastern Slovakia on the area of ​​the High Tatras and in the area to the east of it. The southern border is formed by the Low Tatras and the Slovak Ore Mountains (Slovak Slovenské rudohorie ), in the west the Spiš borders the landscape traditionally known as Liptov (Slovak Liptov ). The Spiš is mostly around the rivers Poprad and Hernád (Slovak Hornád ) (only to Jaklovce ). A small part of the area has been in Poland since 1918 .

Since the 12th century which was Zipser castle until the 16th century the administrative center, from there since the 13th century parallel to the management executive to the de facto city Levoča (German Leutschau ). 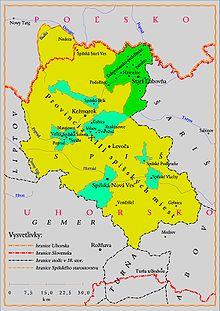 According to the Treaty of Lubowla in 1412

View from the Spiš Castle to the Spiš landscape

The area originally inhabited by Slovaks was conquered by Hungarians in the second half of the 11th century and about 100 years later administratively organized as Zips County (comitatus Scepusiensis) , which essentially existed until the creation of Czechoslovakia in 1918. Until 1802, however, there was a tiny separate Slovak county east of the town of Poprad in the southern part of the Spiš (names: Parvus comitatus, Sedes superior, Sedes X lanceatorum, "Cities of the 10 Lancers"), the origin of which is unknown.

Most of the Spiš cities emerged from German settlements (mainly mining settlements in the Lower Spiš), for which German specialists and miners from Silesia and Central Germany were brought into the country by the Hungarian kings from the 12th century, especially after the Mongol invasion in 1242 .

The residents of the Spiš created their own spiritual organization in the 13th century, the brotherhood of 24 royal pastors , and parallel to this the political organization Bund der 24 Spiš cities , headed by the Spiš Count, who was elected by the city judges. The federation was given a self-administration which roughly corresponded to that of the royal free cities . Since 1370, the 24 federal cities and 20 other Spiš settlements applied a uniform Spiš law (Spis arbitrariness) .

The union of the 24 Spiš cities was dissolved in 1412 when King Sigismund of Luxembourg pledged 13 of these cities and the area around the castle Stará Ľubovňa (German Altlublau , Polish Lubowla ) to Poland for financial reasons (borrowing for the war against Venice ) , that did not interfere with their self-administration. Nominally, the pledged territories still belonged to Hungary , and only their economic use and administration were pledged, especially the tax revenue. The pledged cities formed the union of 13 Spiš cities in 1412 and, due to their mediating role (German cities in Hungary pledged to Poland with Slovak subjects), experienced an economic boom. The remaining 11 cities, which formed the federation of the 11 Spiš cities in 1412 , on the other hand, could not maintain the traditionally privileged position of the cities in the Spiš and became dependent on the Spis Castle as early as 1465 . As a result, they sank to the level of meaningless villages and largely lost their German character.

After the area had become part of Czechoslovakia in 1918 , the newly founded Poland occupied and annexed 195 km² in the northern Spiš (see Czechoslovak-Polish border conflicts ). The parts of the county that remained with Czechoslovakia (now called Spišská župa in Slovak ) remained in existence until 1922, but the competencies of this administrative area were completely different from the previous ones. In 1923 the Spiš was then divided into the newly created Lower Tatras (Podtatranská župa) and Košická župa counties and since then has existed only as a region and landscape of Spiš .

From the 15th century the county was divided into three chair districts. In 1798 that number was increased to four, and by the second half of the 19th century it was nine.

In the early 20th century the following chair districts existed (named after the name of the administrative seat):

Counties (counties) in the Kingdom of Hungary around 1910